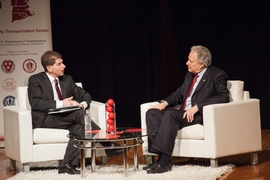 Discussions of self-driving vehicles are often accompanied by highly confident predictions: Visions of the future include whole networks of automated cars seamlessly zipping around metropolitan areas, safely and efficiently, with every person inside them a passive, hands-off passenger.

On Tuesday at MIT, the U.S. government’s chief auto safety official offered a more restrained view, suggesting that technology could provide important new safeguards for cars, while observing that it is too soon to say precisely what form vehicular automation will eventually take.

“Right now, we really don’t know what the future is,” said Mark Rosekind, administrator of the National Highway Traffic Safety Administration (NHTSA), during a public forum at the Institute.

“There’s this image we’ll be taking naps and doing crossword puzzles” while in cars, Rosekind noted, adding that the more immediate question is what it would take to make such a scenario possible. “Can we get there?” he asked.

In his remarks, Rosekind expressed enthusiasm for the possibility of automation-based safety improvements and said that NHTSA is trying to expedite the process through which more testing of automation takes place. The agency aims to complete within six months a policy document through which it can give guidance to automakers and technology companies, and outline a path forward for more experimentation on roads.

“I think we need a huge amount of data,” he said.

The government’s principal goal while examining all of this, Rosekind emphasized, is safety.

“It’s all about the human,” Rosekind said. “The human has to be front and center.”

The forum, “The Present and Future of Automated Driving: Technology, Policy, and the Human Factor,” drew an audience of over 250 people to MIT’s Kresge Auditorium. The event was hosted by the MIT AgeLab. Rosekind participated in a conversation with Bryan Reimer, a research scientist at the MIT AgeLab and associate director of the New England University Transportation Center, of which MIT is a part.

In his remarks, Rosekind highlighted the large number of auto fatalities in the U.S: There were 32,675 such deaths in 2014. That is actually down substantially — about 20 percent — over the last decade. And yet, Rosekind said, preliminary data indicate the figure may jump back up by 9 percent for 2015, perhaps partly because gas prices have been lower and the volume of vehicles on the road may have thus increased.

“The question is how we start nailing on better and better technologies,” he said.

One of the keys to automated safety, he stressed, was connectivity: making sure vehicles are communicating with each other on the road.

“Connected vehicles give you further levels of safety that you can’t get with independent autonomous vehicles,” Rosekind said. Such vehicle-to-vehicle communication, he explained, could help reduce accidents at intersections and in all kinds of scenarios where driver vision is normally limited.

On the other hand, Rosekind noted, in response to an audience question, the development of communication among all autos on the road would either require massive retrofitting among current autos or take a long time to phase in: “If you had perfect, connected autonomous vehicles on the road tomorrow, it would still take 20 to 30 years to turn over the fleet.”

In response to further questions from the audience, Rosekind acknowledged that issues about data privacy and security from hackers were among the hurdles that have to be cleared in order for automation to jump forward.

“Humans aren’t going to trust the vehicles unless you address those [issues],” he suggested.

And Rosekind took a neutral stance on one of the main issues involving self-driving cars: whether they could be totally autonomous, which is the direction Google has been moving in, or whether more incremental versions of vehicle automation will take hold, which is what some automakers believe.

“Folks tend to separate this into two views,” Rosekind agreed, emphasizing again that the degree of automation was still very much to be determined: “I don’t think we know yet.”