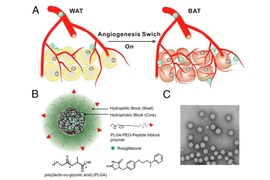 Researchers at MIT and Brigham and Women’s Hospital have developed nanoparticles that can deliver antiobesity drugs directly to fat tissue. Overweight mice treated with these nanoparticles lost 10 percent of their body weight over 25 days, without showing any negative side effects.

These drugs, which are not FDA-approved to treat obesity, are not new, but the research team developed a new way to deliver them so that they accumulate in fatty tissues, helping to avoid unwanted side effects in other parts of the body.

“The advantage here is now you have a way of targeting it to a particular area and not giving the body systemic effects. You can get the positive effects that you’d want in terms of antiobesity but not the negative ones that sometimes occur,” says Robert Langer, the David H. Koch Institute Professor at MIT and a member of MIT’s Koch Institute for Integrative Cancer Research.

More than one-third of Americans are considered to be obese, and last year obesity overtook smoking as the top preventable cause of cancer death in the United States, with 20 percent of the 600,000 cancer deaths attributed to obesity.

Langer and Omid Farokhzad, director of the Laboratory of Nanomedicine and Biomaterials at Brigham and Women’s Hospital, are the senior authors of the study, which appears in the Proceedings of the National Academy of Sciences the week of May 2. The paper’s lead authors are former MIT postdoc Yuan Xue and former BWH postdoc Xiaoyang Xu.

Langer and his colleagues have previously shown that promoting the growth of new blood vessels, a process known as angiogenesis, can help transform adipose tissue and lead to weight loss in mice. However, drugs that promote angiogenesis can be harmful to the rest of the body.

To try to overcome that, Langer and Farokhzad turned to the nanoparticle drug-delivery strategy they have developed in recent years to treat cancer and other diseases. By targeting these particles to the disease site, they can deliver a powerful dose while minimizing the drug’s accumulation in other areas.

The researchers designed the particles to carry the drugs in their hydrophobic cores, bound to a polymer known as PLGA, which is used in many other drug delivery particles and medical devices. They packaged two different drugs within the particles: rosiglitazone, which has been approved to treat diabetes but is not widely used due to adverse side effects, and an analog of prostaglandin (a type of human hormone). Both drugs activate a cellular receptor known as PPAR, which stimulates angiogenesis and adipose transformation.

The outer shell of the nanoparticles consists of another polymer, PEG, embedded with targeting molecules that guide the particles to the correct destination. These targeting molecules bind to proteins found in the lining of the blood vessels that surround adipose tissue.

The researchers tested the particles in mice that had become obese after being fed a high-fat diet. The mice lost about 10 percent of their body weight, and their levels of cholesterol and triglycerides (molecules that are the main constituent of body fat in humans) also dropped. The mice also became more sensitive to insulin. (Obesity often leads to insulin insensitivity, which is a risk factor for type 2 diabetes).

The mice did not show any side effects from the treatment, which was delivered every other day for 25 days.

“This is a very exciting and clinically important contribution, grounded in the recognition of the significant and growing need for new therapeutic approaches for the treatment of obesity,” says Marsha Moses, a professor at Harvard Medical School and director of the vascular biology program at Boston Children’s Hospital, who was not involved in the research. “The authors convincingly demonstrate that by coupling the selective transformation of adipose tissue from an energy storage status to an energy expenditure status with the stimulation of angiogenesis, one can effectively reduce obesity in vivo.”

With the current system, the particles are injected intravenously, which could make this approach suitable for morbidly obese patients who are at significant risk of obesity-related diseases, Farokhzad says.

“For it to be more broadly applicable for treatment of obesity, we have to come up with easier ways to administer these targeted nanoparticles, such as orally,” he says.

The researchers also hope to find more specific adipose tissue targets for the nanoparticles, which could further reduce the possibility of side effects, and they may also investigate using other drugs with lower toxicity.

“This is a proof-of-concept approach for selectively targeting the white adipose tissue and ‘browning it’ to allow the body to burn fat. The technology could then be used with other drug molecules that may be developed or other targets that may come up,” Farokhzad says.

The research was funded by the National Institutes of Health and a Koch-Prostate Cancer Foundation Award in Nanotherapeutics.