From engineer to urban planner 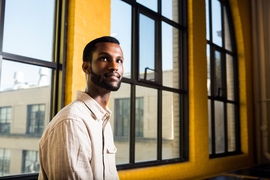 ↓ Download Image
Caption: “People have their different ways of adapting,” says MIT graduate student Billy Ndengeyingoma. “And mine was approaching all the people from the international community and trying to figure things out together, like how to catch a train, and all these very basic things, but also reaching out to the American students, who were very open, to talk about the culture and the way things work here.”
Credits: Photo: Jake Belcher 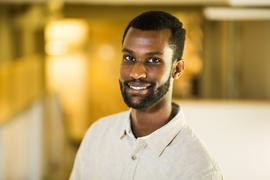 ↓ Download Image
Caption: “People have their different ways of adapting,” says MIT graduate student Billy Ndengeyingoma. “And mine was approaching all the people from the international community and trying to figure things out together, like how to catch a train, and all these very basic things, but also reaching out to the American students, who were very open, to talk about the culture and the way things work here.”
Credits: Photo: Jake Belcher

Caption:
“People have their different ways of adapting,” says graduate student Billy Ndengeyingoma. “And mine was approaching all the people from the international community and trying to figure things out together, like how to catch a train, and all these very basic things, but also reaching out to the American students, who were very open, to talk about the culture and the way things work here.”
Credits:
Photo: Jake Belcher

Billy Ndengeyingoma’s time at MIT has been marked by transitions. He has moved from one continent to another, from an undergraduate program to a master’s, and from a civil engineering specialty to urban planning.

Yet no matter what is happening in his life, he has learned to always make time for self-reflection. This practice has helped him discover a great deal about himself, and has pushed him to think deeply about the impact he wants to have on the world.

Ndengeyingoma, who grew up in Kigali, Rwanda, always thought he might go to the United States for college. (His brother and sister both completed master’s degrees in Atlanta.) After overhearing a conversation with a family friend whose son had attended MIT, he decided to apply.

Ndengeyingoma’s first introduction to MIT was through International Orientation, where he and the other international students learned about U.S. culture. For Ndengeyingoma, the transition process ended up being easier than he expected.

“People have their different ways of adapting,” says Ndengeyingoma. “And mine was approaching all the people from the international community and trying to figure things out together, like how to catch a train, and all these very basic things, but also reaching out to the American students, who were very open, to talk about the culture and the way things work here.”

Ndengeyingoma ended up with a unique opportunity to reflect on his undergraduate years and his experience navigating two different cultures when he was asked to participate in a documentary, “One Day I Too Go Fly,” produced by Arthur Musah ’04, MEng ’05 (who was also an international student).

The documentary, which will be released in 2017, follows Ndengeyingoma and three of his African classmates throughout their undergraduate years. Musah even took a trip to each student’s home country. For Ndengeyingoma, the film provided a much-needed opportunity to slow down and take the time to digest everything that was happening to him.

“In hindsight it was a great experience to be part of because it forced me to be reflective and introspective about my own experience, and about how these cultural negotiations and all of the different forces that affected me are changing my worldview,” says Ndengeyingoma. “And how my own ego and person have changed and are evolving throughout the years.”

A path to urban planning

Academically, Ndengeyingoma’s undergraduate years at MIT were a time of figuring out what exactly he wanted to do. After deciding to major in civil engineering, he began dabbling in materials science.

As part of MIT’s Undergraduate Research Opportunities Program (UROP), Ndengeyingoma spent a semester working in the Laboratory for Atomistic and Molecular Mechanics, led by McAfee Professor of Engineering Markus Buehler, where he used computer simulations to see how graphene is deformed by water.

Ndengeyingoma also spent a summer in France, through the MIT International Science and Technology Initiatives (MISTI), working with a different category of emerging materials: silica aerogels.

“They're very, very light materials, and they're extremely porous,” says Ndengeyingoma, who worked on adapting a general equation that describes how porous materials absorb fluids, to the irregular porosity of silica aerogels.

However, the biggest shift in Ndengeyingoma’s academic interests happened right before his senior year, during an internship with an architecture firm called MASS Design Group. Ndengeyingoma spent the summer analyzing the affordable housing market in Kigali, focusing on parameters such as land, infrastructure, construction, building materials, and architecture.

The experience was Ndengeyingoma’s first exposure to urban planning and helped him see how well-designed housing can empower people and improve their lives.

“Housing has a huge value in securing people's right to a city and making sure that they feel dignified by living where they live and that their housing has a clear connection to their already established social networks, and also to the broader city itself,” explains Ndengeyingoma.

Ndengeyingoma realized that as an urban planner he would be able to incorporate a strong sense of social responsibility into his work, and that fall he applied to MIT’s master’s program in city planning, in the Department of Urban Studies and Planning.

The power of housing design

When Ndengeyingoma returned home to Kigali the summer after completing his undergraduate degree, he decided to start considering his city through the lens of urban planning.

“I realized that I hadn't made enough critical observations of my own city and my own living environment,” he says. “And I thought a great medium to do that and start to explore my own city was through photography.”

Ndengeyingoma focused on Nyamirambo, a neighborhood of small stores that lack the usual storefront display windows and instead are painted with colorful images that highlight the products they sell or the services they offer.

“It's just a rainbow of colors and it's really lively,” says Ndengeyingoma.

Back at MIT, Ndengeyingoma held a photo exhibition for students and faculty, which was the start of his involvement in an organization called UrbanAfrica. The group also organizes big events and invites interesting speakers to campus in an effort to engage students and faculty, and elevate the discussion about urbanism on the African continent.

Now a year into his master’s degree, Ndengeyingoma has continued to focus on housing development in Africa through his research with the Resilient Cities Housing Initiative. Ndengeyingoma spent the last year assessing how successfully an informal housing settlement in Cape Town, South Africa was upgraded according to four main criteria for resilience: improving the economic livelihood of the residents, shielding the residents from environmental stresses and risks, providing tools to empower residents with self-governance, and offering secure land tenure.

“We had this year-long process of mainly looking at the literature but also making our own assumptions and understandings of how that process happened and how it could have happened better, and how resilience plays into all of it,” says Ndengeyingoma.

This past summer, Ndengeyingoma returned once again to Kigali, where he had his first exposure to the public sector when he co-conducted a workshop on the role of design in affordable housing, aimed at the Rwandan Housing Authority.

“When you're behind your computer, reading papers, it's really great to think about problems theoretically,” he says. “But when you go on the ground and you visit people's houses, and you ask them about their own aspirations, that makes a huge difference in the way you both perceive the problem and [seek] an inclusive solution for them.”

The dual experiences helped Ndengeyingoma realize that he would like to work in the public sector, not only because of the ethical responsibility he feels but because there is so much space for innovative solutions.

For Ndengeyingoma, working in Kigali has been especially meaningful because of what his city and his country has gone through over the past decades. Ndengeyingoma is too young to remember the Rwandan genocide — instead, he has watched his country go through a significant rebuilding phase in the years since. After completing his degree, Ndengeyingoma plans on returning to Rwanda, where he can put his urban planning skills to use shaping the continuing development of his country.

“I had the chance to be in my city, be in a safe city that wasn't always that way, and I acknowledge the sacrifices that a lot of people had to make to ensure my own right to live in my city in a free environment,” says Ndengeyingoma. “I want to arm myself with the academic and professional tools to ensure people's right to stay in their city and have adequate housing in a space that they feel safe and proud to be in.”

Kenya under the microscope