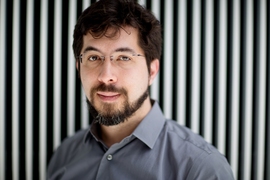 Caption:
An illustration of RNA.

MIT researchers have devised a new set of proteins that can be customized to bind arbitrary RNA sequences, making it possible to image RNA inside living cells, monitor what a particular RNA strand is doing, and even control RNA activity.

The new strategy is based on human RNA-binding proteins that normally help guide embryonic development. The research team adapted the proteins so that they can be easily targeted to desired RNA sequences.

“You could use these proteins to do measurements of RNA generation, for example, or of the translation of RNA to proteins,” says Edward Boyden, an associate professor of biological engineering and brain and cognitive sciences at the MIT Media Lab. “This could have broad utility throughout biology and bioengineering.”

Unlike previous efforts to control RNA with proteins, the new MIT system consists of modular components, which the researchers believe will make it easier to perform a wide variety of RNA manipulations.

“Modularity is one of the core design principles of engineering. If you can make things out of repeatable parts, you don’t have to agonize over the design. You simply build things out of predictable, linkable units,” says Boyden, who is also a member of MIT’s McGovern Institute for Brain Research.

Boyden is the senior author of a paper describing the new system in the Proceedings of the National Academy of Sciences. The paper’s lead authors are postdoc Katarzyna Adamala and grad student Daniel Martin-Alarcon.

Living cells contain many types of RNA that perform different roles. One of the best known varieties is messenger RNA (mRNA), which is copied from DNA and carries protein-coding information to cell structures called ribosomes, where mRNA directs protein assembly in a process called translation. Monitoring mRNA could tell scientists a great deal about which genes are being expressed in a cell, and tweaking the translation of mRNA would allow them to alter gene expression without having to modify the cell’s DNA.

To achieve this, the MIT team set out to adapt naturally occurring proteins called Pumilio homology domains. These RNA-binding proteins include sequences of amino acids that bind to one of the ribonucleotide bases or “letters” that make up RNA sequences — adenine (A), cysteine (C), uracil (U), and guanine (G).

In recent years, scientists have been working on developing these proteins for experimental use, but until now it was more of a trial-and-error process to create proteins that would bind to a particular RNA sequence.

“It was not a truly modular code,” Boyden says, referring to the protein’s amino acid sequences. “You still had to tweak it on a case-by-case basis. Whereas now, given an RNA sequence, you can specify on paper a protein to target it.”

To create their code, the researchers tested out many amino acid combinations and found a particular set of amino acids that will bind each of the four bases at any position in the target sequence. Using this system, which they call Pumby (for Pumilio-based assembly), the researchers effectively targeted RNA sequences varying in length from six to 18 bases.

“I think it’s a breakthrough technology that they’ve developed here,” says Robert Singer, a professor of anatomy and structural biology, cell biology, and neuroscience at Albert Einstein College of Medicine, who was not involved in the research. “Everything that’s been done to target RNA so far requires modifying the RNA you want to target by attaching a sequence that binds to a specific protein. With this technique you just design the protein alone, so there’s no need to modify the RNA, which means you could target any RNA in any cell.”

In experiments in human cells grown in a lab dish, the researchers showed that they could accurately label mRNA molecules and determine how frequently they are being translated. First, they designed two Pumby proteins that would bind to adjacent RNA sequences. Each protein is also attached to half of a green fluorescent protein (GFP) molecule. When both proteins find their target sequence, the GFP molecules join and become fluorescent — a signal to the researchers that the target RNA is present.

Furthermore, the team discovered that each time an mRNA molecule is translated, the GFP gets knocked off, and when translation is finished, another GFP binds to it, enhancing the overall fluorescent signal. This allows the researchers to calculate how often the mRNA is being read.

This system can also be used to stimulate translation of a target mRNA. To achieve that, the researchers attached a protein called a translation initiator to the Pumby protein. This allowed them to dramatically increase translation of an mRNA molecule that normally wouldn’t be read frequently.

“We can turn up the translation of arbitrary genes in the cell without having to modify the genome at all,” Martin-Alarcon says.

The researchers are now working toward using this system to label different mRNA molecules inside neurons, allowing them to test the idea that mRNAs for different genes are stored in different parts of the neuron, helping the cell to remain poised to perform functions such as storing new memories. “Until now it’s been very difficult to watch what’s happening with those mRNAs, or to control them,” Boyden says.

These RNA-binding proteins could also be used to build molecular assembly lines that would bring together enzymes needed to perform a series of reactions that produce a drug or another molecule of interest.

Robots that reveal the inner workings of brain cells