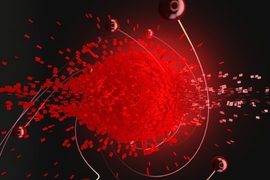 ↓ Download Image
Caption: In this image, the middle "explosion" is a cloud of hot electrons, inside graphene, that bounce off one another as they reach equilibrium and spread out. The red spheres are those electrons that are energetic enough to escape the hot cloud in less than 30 femtoseconds and generate an electric current. MIT researchers have developed a technique to access and control these ultrafast processes.

Caption:
In this image, the middle "explosion" is a cloud of hot electrons, inside graphene, that bounce off one another as they reach equilibrium and spread out. The red spheres are those electrons that are energetic enough to escape the hot cloud in less than 30 femtoseconds and generate an electric current. MIT researchers have developed a technique to access and control these ultrafast processes.
Credits:
Image: Ella Marushchenko (Ella Maru studio)

When you shine a light on a conducting surface like silicon or graphene, that light jump-starts certain electrons into high-energy states and kicks off a cascade of interactions that happens faster than the blink of an eye. Within just a few femtoseconds — a thousand trillionth of a second — these energized electrons can scatter among other electrons like balls on a billiard table, quickly dissipating energy in an ultrafast process known as thermalization.

Now physicists at MIT have come up with a way to manipulate electrons in graphene within the first few femtoseconds of photo-excitation. With their technique, the researchers can redirect these high-energy electrons before they interact with other electrons in the material.

The team’s ultrafast control of high-energy electrons may ultimately lead to more efficient photovoltaic and energy-harvesting devices, which capture photo-excited electrons before they lose their energy to thermalization.

“We’re intellectually excited about whether this will have technological applications,” says Pablo Jarillo-Herrero, associate professor of physics at MIT. “It’s too soon to know, but there are certain angles of looking at this where it's clear there might be ways to engineer energy flow or transfer in ways that are novel. Now we need more people thinking about this.”

The group’s results are published this week in the journal Nature Physics. Jarillo-Herrero’s co-authors include lead author and graduate student Qiong Ma, along with Jing Kong, professor of electrical engineering and computer science, and Nuh Gedik, associate professor of physics.

In a previous, unrelated experiment, Jarillo-Herrero and his colleagues fabricated an incredibly thin, sandwich-like device composed of two sheets of graphene, each a single atom thin, separated by an insulating layer of boron-nitride. The group had been subjecting the structure to varying intensities of voltage and light, and observing the resulting current, or flow of electrons, from one layer to another.

They found that, at certain voltages and wavelengths of light, they could produce a relatively strong current across the boron-nitride layer — an indication that high-energy electrons were tunneling from one graphene sheet to the other without losing much energy.

Depending on the voltage and light wavelength applied, the researchers could direct high-energy electrons to either stay and dissipate their energy within the top graphene layer, or tunnel across the boron-nitride layer and into the bottom graphene sheet, where they could then interact with other electrons and scatter their energy.

“Typically you can only start doing things after maybe 1,000 femtoseconds, after these ultrafast interactions have already taken place,” Jarillo-Herrero says. “We’re able to … decide whether the electron goes here or there before it interacts with any other electron, within a few femtoseconds.”

Getting out of graphene

The team’s ultrafast control may stem from the nature of graphene itself. Because graphene is so exceptionally thin, electrons don’t have very far to jump if they get the right push.

“This femtosecond response is because of the 2-D structure of graphene,” Ma says. “It’s just one atom thick, and the electrons are already at the surface, so it’s easier for them to jump out and onto another material.”

As the team soon found, coaxing electrons to jump from one sheet of graphene to another required the right combination of voltage and light. Ma and Jarillo-Herrero plotted their experimental results and identified combinations of voltage and light wavelength that would direct high-energy electrons to either stay within the top graphene layer or jump to the bottom layer.

“Say you tell me, ‘I’d like to have these electrons jumping from one layer to another, and I only have blue photons,’” Jarillo-Herrero says. “I can say that at least with blue photons, you have to apply this voltage. If you only have green photons, then you should apply more voltage than this. That’s what we’re able to map.”

Ultimately, he says these results may help to improve solar cells and energy harvesting devices by enabling them to capture and use more photo-excited electrons.

“Modern solar cells work such that if a photon comes and can be absorbed by silicon, it contributes to current in your photovoltaic device,” Jarillo-Herrero says. “If the light consists of lower-energy infrared photons, those are not absorbed by silicon. That limits seriously the efficiency of silicon solar cells. Now with our device, in principle you can absorb many lower-energy photons, those that silicon just lets through, such that the accumulation of that energy can contribute to a current in your electrical circuit. This is a mechanism by which you could think of doing it.”

“This very exciting work from the MIT team demonstrates a new way to manipulate photo-excited ‘hot’ electrons in graphene across atomically thin barriers," says Philip Kim, professor of physics at Harvard University, who was not involved in the research. "Their findings lay an important step toward the realization of novel optoelectronic and energy-harvesting devices based on graphene heterostructures.”

Four professors granted tenure in the School of Science