How the brain builds panoramic memory 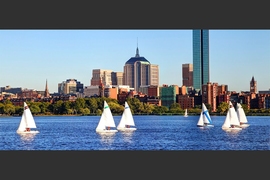 ↓ Download Image
Caption: “Our understanding of our environment is largely shaped by our memory for what’s currently out of sight,” says Caroline Robertson, a postdoc at MIT’s McGovern Institute for Brain Research and a junior fellow of the Harvard Society of Fellows. “What we were looking for are hubs in the brain where your memories for the panoramic environment are integrated with your current field of view.”

Caption:
“Our understanding of our environment is largely shaped by our memory for what’s currently out of sight,” says Caroline Robertson, a postdoc at MIT’s McGovern Institute for Brain Research and a junior fellow of the Harvard Society of Fellows. “What we were looking for are hubs in the brain where your memories for the panoramic environment are integrated with your current field of view.”

When asked to visualize your childhood home, you can probably picture not only the house you lived in, but also the buildings next door and across the street. MIT neuroscientists have now identified two brain regions that are involved in creating these panoramic memories.

These brain regions help us to merge fleeting views of our surroundings into a seamless, 360-degree panorama, the researchers say.

“Our understanding of our environment is largely shaped by our memory for what’s currently out of sight,” says Caroline Robertson, a postdoc at MIT’s McGovern Institute for Brain Research and a junior fellow of the Harvard Society of Fellows. “What we were looking for are hubs in the brain where your memories for the panoramic environment are integrated with your current field of view.”

Robertson is the lead author of the study, which appears in the Sept. 8 issue of the journal Current Biology. Nancy Kanwisher, the Walter A. Rosenblith Professor of Brain and Cognitive Sciences and a member of the McGovern Institute, is the paper’s lead author.

As we look at a scene, visual information flows from our retinas into the brain, which has regions that are responsible for processing different elements of what we see, such as faces or objects. The MIT team suspected that areas involved in processing scenes — the occipital place area (OPA), the retrosplenial complex (RSC), and parahippocampal place area (PPA) — might also be involved in generating panoramic memories of a place such as a street corner.

If this were true, when you saw two images of houses that you knew were across the street from each other, they would evoke similar patterns of activity in these specialized brain regions. Two houses from different streets would not induce similar patterns.

“Our hypothesis was that as we begin to build memory of the environment around us, there would be certain regions of the brain where the representation of a single image would start to overlap with representations of other views from the same scene,” Robertson says.

The researchers explored this hypothesis using immersive virtual reality headsets, which allowed them to show people many different panoramic scenes. In this study, the researchers showed participants images from 40 street corners in Boston’s Beacon Hill neighborhood. The images were presented in two ways: Half the time, participants saw a 100-degree stretch of a 360-degree scene, but the other half of the time, they saw two noncontinuous stretches of a 360-degree scene.

Brain scans revealed that when participants saw two images that they knew were linked, the response patterns in the RSC and OPA regions were similar. However, this was not the case for image pairs that the participants had not seen as linked. This suggests that the RSC and OPA, but not the PPA, are involved in building panoramic memories of our surroundings, the researchers say.

In another experiment, the researchers tested whether one image could “prime” the brain to recall an image from the same panoramic scene. To do this, they showed participants a scene and asked them whether it had been on their left or right when they first saw it. Before that, they showed them either another image from the same street corner or an unrelated image. Participants performed much better when primed with the related image.

“After you have seen a series of views of a panoramic environment, you have explicitly linked them in memory to a known place,” Robertson says. “They also evoke overlapping visual representations in certain regions of the brain, which is implicitly guiding your upcoming perceptual experience.”

The research was funded by the National Science Foundation Science and Technology Center for Brains, Minds, and Machines; and the Harvard Milton Fund.