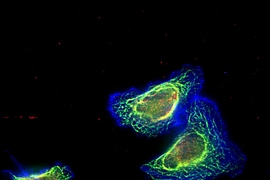 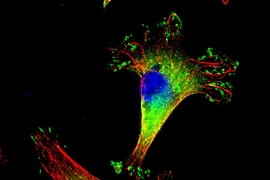 ↓ Download Image
Caption: This image shows triple-negative breast cancer cells with the Mena invasive protein marked in green and the microtubules in red.

Caption:
This image shows triple-negative breast cancer cells with the Mena invasive protein marked in green and the microtubules in red.

MIT biologists have identified a new biomarker that can reveal whether patients with a particularly aggressive type of breast cancer will be helped by paclitaxel (commercially known as Taxol), one of the drugs most commonly used to treat this cancer.

The findings could offer doctors a new way to choose drugs for this type of breast cancer, known as triple-negative because it lacks the three most common breast cancer markers: estrogen receptor, progesterone receptor, and Her2 protein. The biomarker, a protein called Mena, has previously been shown to help cancer cells spread through the body.

The researchers also showed that combining paclitaxel with another drug that interferes with Mena’s effects can kill the cells much more effectively than paclitaxel alone.

“Drugs that target that pathway restore paclitaxel sensitivity to cells expressing Mena,” says Frank Gertler, an MIT professor of biology and a member of the Koch Institute for Integrative Cancer Research. “The study also suggests that during the course of treatment it might be worth monitoring the level of Mena. If the levels begin to increase, it might suggest that switching to another type of therapy could be useful.”

Gertler is the senior author of the study, which appears in the journal Molecular Cancer Therapeutics. Madeleine Oudin, a Koch Institute postdoc, is the paper’s lead author.

The Mena protein is known to interact with a cell’s cytoskeleton in ways that help the cell to become mobile. Many cancer patients have an alternative form of the protein known as Mena invasive or MenaINV, which helps cancer cells to spread from their original location through a process known as metastasis. Gertler’s research group has previously found that breast cancer patients who have high levels of the protein’s invasive form tend to have more metastasis and lower survival rates.

The researchers wondered if Mena might also play a role in cancer cell resistance to chemotherapy. Between 30 to 70 percent of triple-negative breast cancer patients respond well to chemotherapy, but the disease reappears within six to 10 months, on average.

“We know we have good drugs that can kill a lot of cancers, but some people don’t respond to them, and some people do respond but only for a short amount of time,” Oudin says.

After giving paclitaxel to mice with metastatic triple-negative tumors, the researchers found that tumors with the highest levels of Mena showed the worst response: The drug did not slow growth of either the original tumors or metastases. This effect was the same whether the tumors expressed the invasive form of Mena or the original version.

In the Molecular Cancer Therapeutics study, the MIT team tried the paclitaxel-ERK pathway inhibitor combination in breast cancer cells with high levels of Mena and found that it killed cells much more effectively than paclitaxel alone. Clinical trials are already underway to test this combination of drugs in breast cancer.

“Our work would suggest that for a certain subset of patients that have high levels of Mena, that could be an efficient combination to try,” Oudin says.

The findings could also help doctors choose treatments for patients based on the levels of Mena in their tumors. To pursue that possibility, the researchers now hope to do studies with human tumor samples to see if they show the same relationship between Mena levels, paclitaxel sensitivity, and patient outcome. This work may be done in collaboration with MetaStat, a company that Gertler and others founded to develop diagnostic tests based on Mena and other biomarkers.

“The hope is it may also provide more information on therapeutic choice and potentially spare some patients treatment with a chemotherapy that is likely to be less effective,” Gertler says.

“Triple-negative breast cancer patients don’t have many treatment options,” says Bruce Zetter, a professor of cancer biology and surgery at Harvard Medical School. “If this work can help identify patients most likely to respond to Taxol and encourage greater use of the combination of MEK inhibitors and Taxol, that could potentially lead to greater survival of patients with that disease.”

The researchers also hope to uncover more of the mechanism of how Mena affects microtubules, and to see if the same interaction plays a role in drug resistance in other types of cancer, such as ovarian cancer.

Paving the way for metastasis

Why some tumors withstand treatment