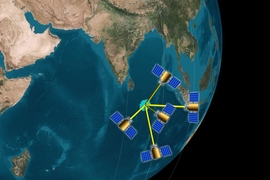 ↓ Download Image
Caption: Clusters of four or more small satellites could look at a single location on Earth from multiple angles, and measure that location’s total reflectance with an error that is half that of single satellites in operation today, an MIT-led study suggests.

Caption:
Clusters of four or more small satellites could look at a single location on Earth from multiple angles, and measure that location’s total reflectance with an error that is half that of single satellites in operation today, an MIT-led study suggests.
Credits:
Courtesy of the researchers (edited by MIT News)

A team of small, shoebox-sized satellites, flying in formation around the Earth, could estimate the planet’s reflected energy with twice the accuracy of traditional monolith satellites, according to an MIT-led study published online in Acta Astronautica. If done right, such satellite swarms could also be cheaper to build, launch, and maintain.

The researchers, led by Sreeja Nag, a former graduate student in MIT’s Department of Aeronautics and Astronautics (AeroAstro), simulated the performance of a single large, orbiting satellite with nine sensors, compared with a cluster of three to eight small, single-sensor satellites flying together around the Earth. In particular, the team looked at how each satellite formation measures albedo, or the amount of light reflected from the Earth — an indication of how much heat the planet reflects.

The team found that clusters of four or more small satellites were able to look at a single location on Earth from multiple angles, and measure that location’s total reflectance with an error that is half that of single satellites in operation today. Nag says such a correction in estimation error could significantly improve scientists’ climate projections.

“Total outgoing radiation is actually one of the biggest uncertainties in climate change, because it is a complex function of where on Earth you are, what season it is, what time of day it is, and it’s very difficult to ascertain how much heat leaves the Earth,” Nag says. “If we can estimate the reflectance of different surface types, globally, frequently, and more accurately, which a cluster of satellites would let you do, then at least you’ve solved one part of the climate puzzle.”

Nag says that to accurately estimate the reflectance of any ground spot on Earth requires measurements taken of that spot from multiple angles at the same time.

“The Earth does not reflect equally in all directions,” Nag says. “If you don’t get these multiple angles, you might under- or overestimate how much it’s reflecting, if you have to extrapolate from just one direction.”

Today, satellites that measure the Earth’s albedo typically do so with multiple cameras, arranged on a single satellite. For example, NASA’s Multi-angle Imaging SpectroRadiometer (MISR) instrument on the Terra satellite houses nine cameras that take images of the Earth from a fan-like arrangement of angles. Nag says the drawback of this design is that the cameras have a limited view, as they are not designed to change angles and can only observe within a single plane.

Instead, the team proposes a cluster of small satellites that travel around the Earth in a loose formation, close enough to each other to be able to image the same spot on the ground from their various vantage points. Each satellite can move within the formation, taking pictures of the same spot at the same time from different angles.

“Over time, the cluster would cover the whole Earth, and you’d have a multiangular, 3-D view of the entire planet from space, which has not been done before with multiple satellites,” Nag says. “Moreover, we can use multiple clusters for more frequent coverage of the Earth.”

Nag and her colleagues simulated formations of three to eight small, orbiting satellites, and developed an algorithm to direct each satellite to point to the same ground spot simultaneously, regardless of its position in space. They programmed each formation to measure a theoretical quantity known as bidirectional reflectance distribution function, or BRDF, that is used to calculate albedo and total outgoing radiation, based on the angles at which measurements are taken and the angle of the sun’s incoming rays.

For each formation, Nag calculated the satellites’ error in measuring BRDF and compared these errors with those of the MISR instrument on the Terra satellite. She validated all errors against data from the NASA Goddard’s Cloud Absorption Radiometer, an airborne instrument that obtains tens of thousands of angular measurements of a ground spot. She found that every formation with seven or more single-sensor satellites performed better than the nine-sensor monolith satellite, with lower estimation errors. The best three-satellite clusters generated half the error of MISR’s estimates of albedo.  The accuracy of overall estimates improved with the number of satellites in the cluster.

“We found that even if you can’t maintain your satellites perfectly, the worst-case error is less than what the single satellite is able to do,” Nag says. “For the best-case scenario, if you are more than halving the error that you currently get, you’re halving the amount of error you would get in reflected heat leaving the Earth. That’s really important for climate change.”

“Halving the error, or increasing the precision, has a direct impact on the climate model used,” says Gass, who was not involved in the study. “As an example, the reflection of a snow covered surface (or the absence thereof) at a certain time of the year can predict flooding or drought in later months. Better and more accurate predictions may lead to cost savings, or even the prevention of loss of life.”

"This work is significant not only for demonstrating the capability for instantaneous multiangular BRDF measurements from space for different land surface types and biomes, but also for establishing a strong methodological bridge between the systems engineering of future small satellite clusters and high fidelity Earth science simulations,” de Weck says. “Our team fully expects that a demonstration mission of this type could be flown within the next decade."

While multisatellite formation flights have been deemed expensive endeavors, Nag says this assumption mostly pertains to satellites that need to maintain very strict formations, with centimeter-level accuracy — a precision that requires expensive control systems. The satellites she proposes would not have to keep to any single formation as long as they all point to the same location.

There’s another big advantage to monitoring the Earth with small satellites: less risk.

“You can launch three of these guys and start operating, and then put three more up in space later — your performance would improve with more satellites,” Nag says. “If you lose one or two satellites, you don’t lose the whole measurement system — you have graceful degradation. If you lose the monolith, you lose everything.”

Solving the mystery of the Antarctic’s missing heat