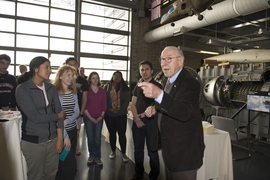 ↓ Download Image
Caption: On Wednesday, James Lovell (right) spoke at MIT as a special guest, invited by the Department of Aeronautics and Astronautics. Lovell attended a pre-talk reception in AeroAstro’s Neumann Hangar. 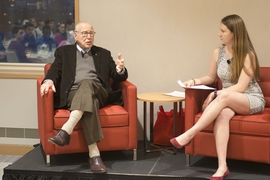 ↓ Download Image
Caption: Taken at the American Institute of Aeronautics and Astronautics (AIAA) MIT student chapter dinner, during an audience Q&A. Lovell took several questions from the audience, one from an AeroAstro PhD candidate, who asked his advice for anyone dealing with “crushing stress.” “You have to have a positive attitude, and look ahead,” Lovell responded. 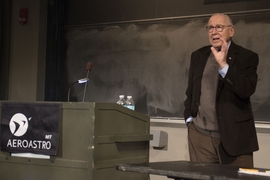 ↓ Download Image
Caption: Lovell described Apollo 8 as the high point of his space career, recalling moments when he had the chance to look out the spacecraft’s windows, back towards the Earth.

Caption:
Lovell spoke with students at the American Institute of Aeronautics and Astronautics (AIAA) MIT student chapter dinner. At his public MIT talk, he took questions from the audience, including from an AeroAstro PhD candidate who asked his advice for anyone dealing with stress. “You have to have a positive attitude, and look ahead,” Lovell responded.
Credits:
Photo: Bill Litant

Caption:
Lovell described Apollo 8 as the high point of his space career, recalling moments when he had the chance to look out the spacecraft’s windows, back toward Earth.
Credits:
Photo: Bill Litant

On April 14, 1970, 56 hours after the Apollo 13 spacecraft launched into space en route to the moon, commander James Lovell began filming inside the spacecraft’s command module as part of a live television program to be beamed down to three major U.S. networks. The broadcast was meant to give people on Earth a glimpse into the mission, which was to be NASA’s third landing on the moon, following its first historic and much celebrated Apollo 11 mission, and later, the equally successful Apollo 12.

“But this was the third lunar landing flight,” says Lovell, who spoke at MIT on Wednesday to a rapt audience, packed and overflowing in Room 10-250. “All three networks received the signal — nobody carried it. There was the Dick Cavett show … a rerun of ‘I Love Lucy,’ and a ballgame — even people in the control center were watching the ballgame.”

As there seemed to be little interest, NASA’s mission control suggested Lovell cut the program short.

“I said goodnight to everybody, turned off the camera, and was coming down the tunnel, when suddenly there was a ‘hiss, bang!’ and the spacecraft rocked back and forth, jets were firing, and there was noise all over,” Lovell recalled.

Of course, the cascade of system failures that would follow, and the ingenuity in getting the crew safely back to Earth is a story that has since been retold and aired many times over, on radio, television, and on the silver screen, with the 1995 Hollywood blockbuster “Apollo 13,” with Tom Hanks as Lovell.

“That explosion was the best thing to ever happen to NASA,” Lovell told the MIT crowd. “It showed, really, the talent that NASA people had, in mission control and throughout the organization, that turned an almost complete catastrophe into a successful recovery.”

Lovell spoke as a special guest invited to MIT by the Department of Aeronautics and Astronautics (AeroAstro). He recalled a similar visit to MIT, back in the summer of 1968, when he had recently been selected as the navigator for Apollo 8, which was to be the first crewed mission to orbit the moon. At the time, Institute Professor Charles “Doc” Draper and his team at the Instrument Lab — later renamed the Draper Lab — were leading the development of the guidance system for Apollo 8, which would navigate the spacecraft from Earth to the moon. Working with Draper’s team, Lovell learned to use the system to align the spacecraft with respect to Earth, and navigate to the moon using a map of 37 stars.

“This was the first time this system would be used to go to the moon,” Lovell said. “There are probably people here who know it better than I do.”

Lovell described Apollo 8 as the high point of his space career, recalling moments when he had the chance to look out the spacecraft’s windows, back toward Earth.

“The Earth was a place out there that you could put your thumb on and hide it completely,” Lovell recalled. “Everything you’ve ever known — all the problems that you have — if you put up your thumb, they all disappear. It was really mind-boggling to me. It was one of the most successful, incident-free Apollo flights that we had.”

Lovell’s next and final spaceflight, Apollo 13, was expected to be similarly smooth. Two weeks before launch, the spacecraft underwent its last test.

“As the countdown went on, we could see the whole spacecraft come to life,” Lovell said. “The test was successful — everything looked perfect.”

When the ground crew came by to empty the liquid oxygen tanks, which would be refilled before launch, they were unable to do so. It would take a month to replace the tanks, which would have delayed the mission. However, they noticed that one of the tanks was an old design, meant for Apollo 10, that was configured with an oxygen-emptying tube and a heater.

“They figured, why not turn on the heater and boil the oxygen out, and therefore save time? Not a bad idea, so that’s what they did,” Lovell said. “The day before liftoff, they filled it up once more with liquid oxygen. It was a bomb waiting to go off” because the fix actually damaged the internal elements of the tank.

And go off it did, with a ‘hiss, bang!’ that shook the spacecraft, shortly after Lovell ended the television broadcast on April 14. Checking the instrument gauges, he found that one oxygen tank was completely empty, while another was being rapidly depleted. As he looked out a side window, he witnessed a “gaseous substance, at high speed,” shooting out into space.

“That’s when that old lead weight went down in the bottom of my stomach,” Lovell said. “Because we needed oxygen for electricity, the third fuel cell would die, and because we used electricity to control our rocket engine, we’d lose the entire propulsion system. We were in serious trouble.”

“A square peg through a round hole”

The crew, including NASA astronauts Jack Swigert and Fred Haise, scrambled to find a fix, quickly realizing they would have to abort the lunar mission and attempt to fly home not in the main service module, but in the much smaller lunar module (originally equipped for two men to explore the surface of the moon), before re-docking with the main spacecraft.

“We used it as a life raft,” Lovell said. “It’s a fragile device, with skin so thin you could probably punch a hole through it.”

The crew worked with mission control to redirect the severely compromised craft back toward Earth, with its limited reserves of power and oxygen. Just as everything appeared to be on course for a successful return, the module’s carbon dioxide light blinked on, indicating the cabin, designed for two people, was saturated with the breathing of three men.

“If we weren’t going to do anything, we would be poisoned by our own exhalations,” Lovell said.

In a moment that the film “Apollo 13” has since made famous, the team would have to “invent a way to put a square peg in a round hole.” They did so using a piece of plastic Lovell recalled that he had stored underwear in, a cardboard cover from a manual, an old sock, and duct tape.

“If you come in too shallow, it’ll be like skipping a stone across water, and you’re gone,” Lovell said. “If you come in too steep, the sudden deceleration will put you on fire like a meteorite and that will be it. … I guess I wouldn’t be here if that last maneuver wasn’t successful.”

Before closing his talk, Lovell took several questions from the audience, including one from an AeroAstro PhD candidate, who asked his advice for anyone dealing with stress.

“You have to have a positive attitude and look ahead,” Lovell responded. “If we got curled up in some sort of attitude, waiting for a miracle to happen, I’d still be up there. And one other thing: Crises don’t bother me anymore. I just look at them and figure out how to get out of them, and that’s it.”

Mission: "Space for all"

Michael Collins: “I could have been the last person to walk on the moon”