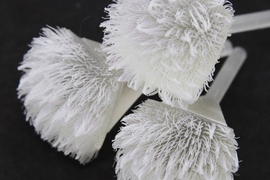 ↓ Download Image
Caption: “It’s very inspiring to see how these [hair-like] structures occur in nature and how they can achieve different functions,” says Jifei Ou, a graduate student in media arts and sciences at MIT. “We’re just trying to think how can we fully utilize the potential of 3-D printing, and create new functional materials whose properties are easily tunable and controllable.” Pictured is an example of 3-D printed hair.
Credits: Courtesy of Tangible Media Group/MIT Media Lab

Caption:
“It’s very inspiring to see how these [hair-like] structures occur in nature and how they can achieve different functions,” says Jifei Ou, a graduate student in media arts and sciences at MIT. “We’re just trying to think how can we fully utilize the potential of 3-D printing, and create new functional materials whose properties are easily tunable and controllable.” Pictured is an example of 3-D printed hair.

These days, it may seem as if 3-D printers can spit out just about anything, from a full-sized sports car, to edible food, to human skin. But some things have defied the technology, including hair, fur, and other dense arrays of extremely fine features, which require a huge amount of computational time and power to first design, then print.

Now researchers in MIT’s Media Lab have found a way to bypass a major design step in 3-D printing, to quickly and efficiently model and print thousands of hair-like structures. Instead of using conventional computer-aided design (CAD) software to draw thousands of individual hairs on a computer — a step that would take hours to compute — the team built a new software platform, called “Cilllia,” that lets users define the angle, thickness, density, and height of thousands of hairs, in just a few minutes.

Using the new software, the researchers designed arrays of hair-like structures with a resolution of 50 microns — about the width of a human hair. Playing with various dimensions, they designed and then printed arrays ranging from coarse bristles to fine fur, onto flat and also curved surfaces, using a conventional 3-D printer. They presented a paper detailing the results at the Association for Computing Machinery’s CHI Conference on Human Factors in Computing Systems in May.

Could the technology be used to print wigs and hair extensions? Possibly, say the researchers. But that’s not their end goal. Instead, they’re seeing how 3-D-printed hair could perform useful tasks such as sensing, adhesion, and actuation.

To demonstrate adhesion, the team printed arrays that act as Velcro-like bristle pads. Depending on the angle of the bristles, the pads can stick to each other with varying forces. For sensing, the researchers printed a small furry rabbit figure, equipped with LED lights that light up when a person strokes the rabbit in certain directions.

And to see whether 3-D-printed hair can help actuate, or move objects, the team fabricated a weight-sorting table made from panels of printed hair with specified angles and heights. As a small vibration source shook the panels, the hairs were able to move coins across the table,  sorting them based on the coins’ weight and the vibration frequency.

Jifei Ou, a graduate student in media arts and sciences, says the work is inspired by hair-like structures in nature, which provide benefits such as warmth, in the case of human hair, and movement, in the case of cilia, which help remove dust from the lungs.

“It’s very inspiring to see how these structures occur in nature and how they can achieve different functions,” Ou says. “We’re just trying to think how can we fully utilize the potential of 3-D printing, and create new functional materials whose properties are easily tunable and controllable.”

The resolution of today’s 3-D printers is “already pretty high,” Ou says. “But we’re not using [3-D printing] to the best of its capabilities.”

The team looked for things to print that would test the technology’s limits. Hair, as it turns out, was the perfect subject.

“[Hair] comes with a challenge that is not on the hardware, but on the software side,” Ou says.

The 3-D printed hairs act like Velcro. (Courtesy of the researchers)

To 3-D-print hair using existing software, designers would have to model hair in CAD, drawing out each individual strand, then feed the drawing through a slicer program that represents each hair’s contour as a mesh of tiny triangles. The program would then create horizontal cross sections of the triangle mesh, and translate each cross section into pixels, or a bitmap, that a printer could then print out, layer by layer.

“If you were to load this file into a normal slicing program, it would crash the program,” he says.

To design hair, the researchers chose to do away with CAD modeling entirely. Instead, they built a new software platform to model first a single hair and then an array of hairs, and finally to print arrays on both flat and curved surfaces.

The researchers modeled a single hair by representing an elongated cone as a stack of fewer and fewer pixels, from the base to the top. To change the hair’s dimensions, such as its height, angle, and width, they simply changed the arrangement of pixels in the cone.

To scale up to thousands of hairs on a flat surface, Ou and his team used Photoshop to generate a color mapping technique. They used three colors — red, green, and blue — to represent three hair parameters — height, width, and angle. For example, to make a circular patch of hair with taller strands around the rim, they drew a red circle and changed the color gradient in such a way that darker hues of red appeared around the circle’s rim, denoting taller hairs. They then developed an algorithm to quickly translate the color map into a model of a hair array, which they then fed to a 3-D printer.

Using these techniques, the team printed pads of Velcro-like bristles, and paintbrushes with varying textures and densities.

Vibrations cause a piece of metal to move across the 3-D printed hairs. (Courtesy of the researchers)

Printing hair on curved surfaces proved trickier. To do this, the team first imported a CAD drawing of a curved surface, such as a small rabbit, then fed the model through a slicing program to generate a triangle mesh of the rabbit shape. They then developed an algorithm to locate the center of each triangle’s base, then virtually drew a line out, perpendicular to the triangle’s base, to represent a single hair. Doing this for every triangle in the mesh created a dense array of hairs running perpendicular to the rabbit’s curved surface.

The researchers then used their color mapping techniques to quickly customize the rabbit hair’s thickness and stiffness.

“With our method, everything becomes smooth and fast,” Ou says. “Previously it was virtually impossible, because who’s going to take a whole day to render a whole furry rabbit, and then take another day to make it printable?”

Among other applications, Ou says 3-D-printed hair may be used in interactive toys. To demonstrate, his team inserted an LED light into the fuzzy printed rabbit, along with a small microphone that senses vibrations. With this setup, the bunny turns green when it is petted in the correct way, and red when it is not.

“The ability to fabricate customized hair-like structures not only expands the library of 3-D-printable shapes, but also enables us to design alternative actuators and sensors,” the authors conclude in their paper. “3-D-printed hair can be used for designing everyday interactive objects.”

Kelly Schaefer, a designer at IDEO, a design consulting firm, says “this type of work expands the possibilities of 3-D printing as an industry because of the new applications it suggests.”

Janissa Delzo writes for CNN that MIT researchers have developed a platform to 3-D print thousands of hair-like structures in minutes. "The purpose of this project is looking beyond the aesthetic perspective," explains graduate student Jifei Ou. "What kind of new functionality can we bring to the material?"