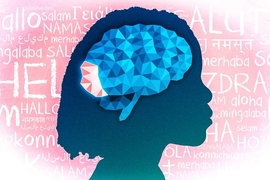 In 2011, MIT neuroscientist Rebecca Saxe and colleagues reported that in blind adults, brain regions normally dedicated to vision processing instead participate in language tasks such as speech and comprehension. Now, in a study of blind children, Saxe’s lab has found that this transformation occurs very early in life, before the age of 4.

The study, appearing in the Journal of Neuroscience, suggests that the brains of young children are highly plastic, meaning that regions usually specialized for one task can adapt to new and very different roles. The findings also help to define the extent to which this type of remodeling is possible.

“In some circumstances, patches of cortex appear to take on other roles than the ones that they most typically have,” says Saxe, a professor of cognitive neuroscience and an associate member of MIT’s McGovern Institute for Brain Research. “One question that arises from that is, ‘What is the range of possible differences between what a cortical region typically does and what it could possibly do?’”

The paper’s lead author is Marina Bedny, a former MIT postdoc who is now an assistant professor at Johns Hopkins University. MIT graduate student Hilary Richardson is also an author of the paper.

The brain’s cortex, which carries out high-level functions such as thought, sensory processing, and initiation of movement, is made of sheets of neurons, each dedicated to a certain role. Within the visual system, located primarily in the occipital lobe, most neurons are tuned to respond only to a very specific aspect of visual input, such as brightness, orientation, or location in the field of view.

“There’s this big fundamental question, which is, ‘How did that organization get there, and to what degree can it be changed?’” Saxe says.

“The reality is somewhere in between those two,” Saxe says.

To study the extent to which cortex can change its function, scientists have focused on the visual cortex because they can learn a great deal about it by studying people who were born blind.

A landmark 1996 study of blind people found that their visual regions could participate in a nonvisual task — reading Braille. Some scientists theorized that perhaps the visual cortex is recruited for reading Braille because like vision, it requires discriminating very fine-grained patterns.

However, in their 2011 study, Saxe and Bedny found that the visual cortex of blind adults also responds to spoken language. “That was weird, because processing auditory language doesn’t require the kind of fine-grained spatial discrimination that Braille does,” Saxe says.

She and Bedny hypothesized that auditory language processing may develop in the occipital cortex by piggybacking onto the Braille-reading function. To test that idea, they began studying congenitally blind children, including some who had not learned Braille yet. They reasoned that if their hypothesis were correct, the occipital lobe would be gradually recruited for language processing as the children learned Braille.

However, they found that this was not the case. Instead, children as young as 4 already have language-related activity in the occipital lobe.

“The response of occipital cortex to language is not affected by Braille acquisition,” Saxe says. “It happens before Braille and it doesn’t increase with Braille.”

Language-related occipital activity was similar among all of the 19 blind children, who ranged in age from 4 to 17, suggesting that the entire process of occipital recruitment for language processing takes place before the age of 4, Saxe says. Bedny and Saxe have previously shown that this transition occurs only in people blind from birth, suggesting that there is an early critical period after which the cortex loses much of its plasticity.

The new study represents a huge step forward in understanding how the occipital cortex can take on new functions, says Ione Fine, an associate professor of psychology at the University of Washington.

The findings raise the question of how the extra language-processing centers in the occipital lobe affect language skills.

There are hints that the occipital lobe’s contribution to language-related functions “takes the pressure off the frontal cortex,” where language processing normally occurs, Saxe says. Other researchers have shown that suppressing left frontal cortex activity with transcranial magnetic stimulation interferes with language function in sighted people, but not in the congenitally blind.

This leads to the intriguing prediction that a congenitally blind person who suffers a stroke in the left frontal cortex may retain much more language ability than a sighted person would, Saxe says, although that hypothesis has not been tested.

Saxe’s lab is now studying children under 4 to try to learn more about how cortical functions develop early in life, while Bedny is investigating whether the occipital lobe participates in functions other than language in congenitally blind people.

Parts of brain can switch functions

Younger brains are easier to rewire