Younger brains are easier to rewire

Study of blind patients supports the idea that there is a period early in a person’s development when brain regions can switch functions.
Anne Trafton, MIT News Office
Publication Date:
Press Inquiries 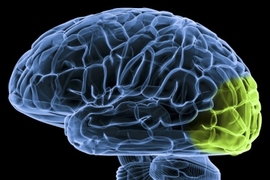 ↓ Download Image
Caption: Some regions of the visual cortex, highlighted here, can be rewired to process sound in the brains of people born blind.

Caption:
Some regions of the visual cortex, highlighted here, can be rewired to process sound in the brains of people born blind.

Caption:
MIT assistant professor Rebecca Saxe
Credits:
Photo: Donna Coveney
About a decade ago, scientists studying the brains of blind people made a surprising discovery: A brain region normally devoted to processing images had been rewired to interpret tactile information, such as input from the fingertips as they trace Braille letters. Subsequent experiments revealed a similar phenomenon in other brain regions. However, these studies didn’t answer the question of whether the brain can rewire itself at any time, or only very early in life.

A new paper from MIT neuroscientists, in collaboration with Alvaro Pascual-Leone at Beth Israel Deaconess Medical Center, offers evidence that it is easier to rewire the brain early in life. The researchers found that a small part of the brain’s visual cortex that processes motion became reorganized only in the brains of subjects who had been born blind, not those who became blind later in life.

The new findings, described in the Oct. 14 issue of the journal Current Biology, shed light on how the brain wires itself during the first few years of life, and could help scientists understand how to optimize the brain’s ability to be rewired later in life. That could become increasingly important as medical advances make it possible for congenitally blind people to have their sight restored, said MIT postdoctoral associate Marina Bedny, lead author of the paper.

In the 1950s and ’60s, scientists began to think that certain brain functions develop normally only if an individual is exposed to relevant information, such as language or visual information, within a specific time period early in life. After that, they theorized, the brain loses the ability to change in response to new input.

Animal studies supported this theory. For example, cats blindfolded during the first months of life are unable to see normally after the blindfolds are removed. Similar periods of blindfolding in adulthood have no effect on vision.

However, there have been indications in recent years that there is more wiggle room than previously thought, said Bedny, who works in the laboratory of MIT assistant professor Rebecca Saxe, also an author of the Current Biology paper. Many neuroscientists now support the idea of a period early in life after which it is difficult, but not impossible, to rewire the brain.

Bedny, Saxe and their colleagues wanted to determine if a part of the brain known as the middle temporal complex (MT/MST) can be rewired at any time or only early in life. They chose to study MT/MST in part because it is one of the most studied visual areas. In sighted people, the MT region is specialized for motion vision.

In the few rare cases where patients have lost MT function in both hemispheres of the brain, they were unable to sense motion in a visual scene. For example, if someone poured water into a glass, they would see only a standing, frozen stream of water.

Previous studies have shown that in blind people, MT is taken over by sound processing, but those studies didn’t distinguish between people who became blind early and late in life.

In the new MIT study, the researchers studied three groups of subjects — sighted, congenitally blind, and those who became blind later in life (age nine or older). Using functional magnetic resonance imaging (fMRI), they tested whether MT in these subjects responded to moving sounds — for example, approaching footsteps.

The results were clear, said Bedny. MT reacted to moving sounds in congenitally blind people, but not in sighted people or people who became blind at a later age.

This suggests that in late-blind individuals, the visual input they received in early years allowed the MT complex to develop its typical visual function, and it couldn’t be remade to process sound after the person lost sight. Congenitally blind people never received any visual input, so the region was taken over by auditory input after birth.

“We need to think of early life as a window of opportunity to shape how the brain works,” said Bedny. “That’s not to say that later experience can’t alter things, but it’s easier to get organized early on.”

Another important aspect of the work is the finding that in the congenitally blind, there is enhanced communication between the MT complex and the brain’s prefrontal cortex, said Ione Fine, associate professor of psychology at the University of Washington. That enhanced connection could help explain how the brain remodels the MT region to process auditory information. Previous studies have looked for enlarged nerve bundles, with no success. “People have been looking for bigger roads, but what she’s seeing is more traffic on the same-size road,” said Fine, who was not involved in the study.

Although this work supports the idea that brain regions can switch functions early in a person’s development, Bedny believes that by better understanding how the brain is wired during this period, scientists may be able to learn how to rewire it later in life. There are now very few cases of sight restoration, but if it becomes more common, scientists will need to figure out how to retrain the patient’s brain so it can process the new visual input.

“The unresolved question is whether the brain can relearn, and how that learning differs in an adult brain versus a child’s brain,” said Bedny.

Bedny hopes to study the behavioral consequences of the MT switch in future studies. Those would include whether blind people have an advantage over sighted people in auditory motion processing, and if they have a disadvantage if sight is restored.