Caption:
In a recent offering of 2.12 (Introduction to Robotics), taught by professor Harry Asada and Kamal Youcef-Toumi, students had to design, build, test, and compete two complex, automated soccer robots, one that played the position of striker and one that played goalie.
Credits:
Photo: John Freidah

Its title is Introduction to Robotics — and for some students, that’s all they need to know to get excited about the popular class in the Department of Mechanical Engineering (MechE) that goes by the number 2.12. For a MechE student, it’s a fun hands-on convergence of design, manufacturing, kinematics, controls, mathematics, mechatronics, problem-solving, and computer science.

“This course is an introduction,” says instructor Professor Harry Asada. “We don’t assume anything about the students’ backgrounds. We just assume we share one thing in common: a love of complex motion. Motion is important in any area of mechanical engineering, but it’s particularly important in robotics — we wouldn’t have robotics without it.”

An elective class for upperclassmen, 2.12 goes beyond abstracts, providing students with a way to visualize complex mathematical concepts and a chance to build on their foundation in mechanical engineering basics. 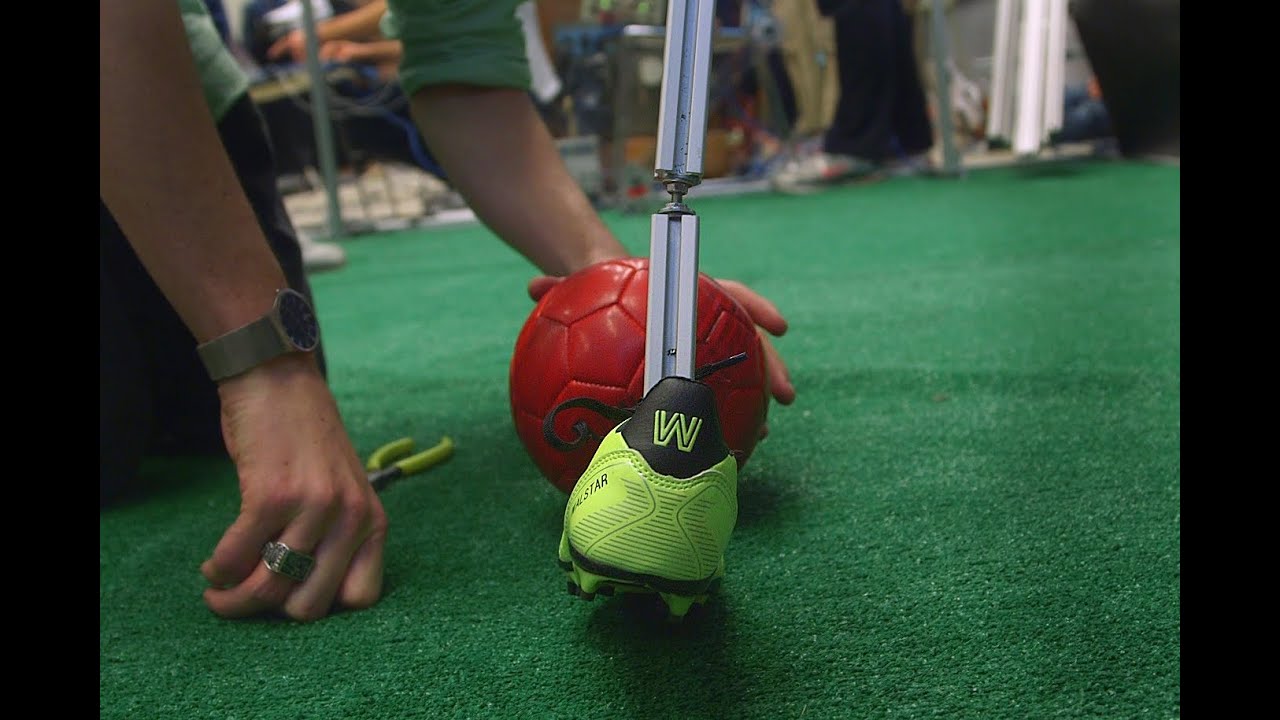 Students spend the first five weeks learning about controls, programming, and relevant mathematics, but during the final seven weeks, they split into teams and focus on building a robot that will compete in a final challenge. Each team member focuses on a different element of his or her robot — controls, manufacturing, or computer vision.

“This is a very difficult challenge for students,” says Professor Kamal Youcef-Toumi, a co-instructor of the class, “and we provide a lot of support for all 80 students to reach the goal: two faculty members, four teaching assistants, undergraduate assistants, and a postdoc. We all feel like part of each student team and want to see them build robots at the highest levels of performance and operations.”

The student teams design, build, and test a robot that will debut its skills in a themed competition. The themes, chosen by Asada and Youcef-Toumi, are based on a recent world event — such as the Fukushima nuclear disaster or the Olympic Games — that will bring relevancy to students.

Last year’s soccer World Cup was the inspiration for this year’s 2.12 final project. The students had to design, build, test, and compete two complex, automated soccer robots, one that played the position of striker and one that played goalie.

“Every year, we raise the bar,” says Youcef-Toumi. “We add new challenges, and this year was no exception. The robots had to be able to receive or kick a ball, and withstand the associated impact forces. These reaction forces had to be born by the structure of the robot and not by the servos.”

The students also used cameras that enabled their robot to intercept the ball and then save or strike it. The robots had to conduct real-time processing of the images and then predict the trajectory of the ball while simultaneously generating their own motion plan to meet and intercept it, regardless of whether the ball was rolling or bouncing.

“This is not an easy thing to do,” Youcef-Toumi says. “But we all had a lot of fun.”

“Every day in this class is an experiment and a new discovery,” Asada says. “If we assign a project to which we already know the solution, it’s no fun. We have found that students come up with brilliant ideas and it’s so much fun to see that happen.”

“We share the joy and pain of it together,” he laughs. “That’s MIT MechE.”

Going under the (robotic) knife

Course 2.12 sends robots to the rescue