Students get serious about fun 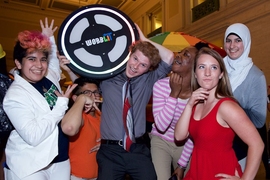 ↓ Download Image
Caption: The Wobblit team displays their toy, a platform that you stand on and shift your weight to tilt it toward the lit-up edge segments.
Credits: Photo: Geoff Tsai 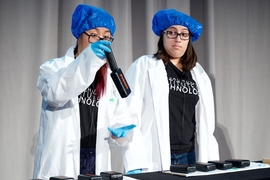 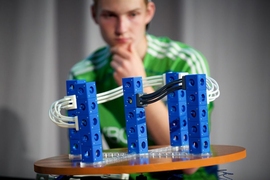 ↓ Download Image
Caption: Marble Mayhem is a construction game where players add or remove ramps to get a marble to roll all the way to the bottom.
Credits: Photo: Amy Loomis 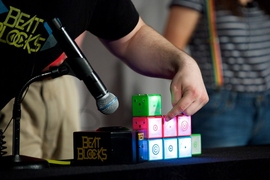 ↓ Download Image
Caption: Beat Blocks are color coded, and each block produces a drumbeat, bass line, or melody when snapped onto a base unit.
Credits: Photo: Amy Loomis 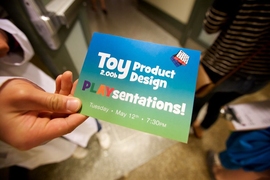 ↓ Download Image
Caption: The final class presentations were open to all and many children enjoyed the show, which was followed by a milk-and-cookies reception.
Credits: Photo: Geoff Tsai

Caption:
The Wobblit team displays their toy, a platform that you stand on and shift your weight to tilt it toward the lit-up edge segments.
Credits:
Photo: Geoff Tsai

Caption:
Students display their creation, building blocks called Struct, which all look the same but have different properties such as built-in magnets.
Credits:
Photo: Amy Loomis

Caption:
Marble Mayhem is a construction game where players add or remove ramps to get a marble to roll all the way to the bottom.
Credits:
Photo: Amy Loomis

Caption:
Beat Blocks are color coded, and each block produces a drumbeat, bass line, or melody when snapped onto a base unit.
Credits:
Photo: Amy Loomis

Caption:
The final class presentations were open to all and many children enjoyed the show, which was followed by a milk-and-cookies reception.
Credits:
Photo: Geoff Tsai

“This is the funnest class at MIT,” declared Maria Yang, an associate professor of mechanical engineering and an instructor of course 2.00b (Toy Product Design), as she introduced the final presentations of toys that 16 teams had spent a semester dreaming up, designing, and prototyping.

And sure enough, the students in 2.00b, now in its eighth year, proceeded to demonstrate a wide array of colorful, intriguing, and imaginative devices. These included building blocks with unexpected properties; board games with extra dimensions; live-action battle games and toy weapons; and unusual construction toys that sometimes unleashed earthquakes to destroy their constructions.

Teams of four to six students — mostly freshmen — introduced their creations with corny skits or elaborate costumes, fielding questions from the crowd in Room 10-250 on Tuesday evening. Attendees included many families with young children — for the most part, the intended customers for the prototype toys and games.

One of the more elaborate creations was a set of LED-studded vests designed to interact with an adhesive ball, for a kind of team tag called “Contagion.” Teams were identified by the colored LEDs on each player’s vest: Each time a player was hit by an opponent’s “contagion” ball, that person’s vest would begin to change color; after three hits, the vest would switch to the opposite team’s color. A team wins by getting all players to end up with its color.

Another battle game, called “Color Chaos,” used ever-changing lighted circles on a mat on the floor; two opponents had to quickly stomp on any circle that lit up in their color, always keeping one foot on their “home” corner. Another battle game, called “Blaster,” featured targets worn on players’ fronts and backs, and special soft pellets the players could shoot at each other, causing the targets to display a hit.

Two games had musical themes. One, called “Bubble Tunes,” was an attempt to make music practice more fun by emitting bubbles from the tops of seven tubes (one for each note of the scale) whenever a player pressed the corresponding key on a keyboard; the bubbles could also respond to any other sound source, including an electric guitar or even recorded music, team members said. Another game, “Beat Blox,” produced music whenever lit, colored blocks were magnetically attached to a base unit. Different colored blocks would produce drum, bass, or melody sounds, which could be arranged to play all at once, or in sequence.

Two toys actually made the ground move. One was a platform called “Earthquake,” on which two opponents each built structures out of blocks, until a sudden earthquake — occurring either at random or at a preset time — would shake the structures, and the tallest surviving building would win. Another game, called “Castle Clash,” also had players creating structures from blocks, but in this case taking turns based on rolls of the dice, and building on separate platforms. Occasionally an earthquake — or a randomly appearing dragon — would shake up one or both structures; again the tallest surviving building would win the game.

One clever toy, called “Wobblit,” required a player to balance on a round platform mounted on a central pivot, where colored lights would light up around the edge. Players would have to shift their weight to tilt the platform toward the lit side, scoring points by doing so, and losing points for tilting the wrong way. Another game, called “Astrobeaver,” required players to take turns pressing an air pump to inflate a balloon one, two, or three times, trying not to be the one to cause it to pop.

A set of building blocks called “Struct” all looked like identical rectangles, but with different properties: Some were magnetic, some had imbalanced mass distribution, some would emit sounds or vibrations when lifted, and some would split in two. As one of the team members explained: “You never know what you’re going to get.”

And that, in fact, was the theme of this year’s 2.00b competition: Surprise! As with so many MIT classes that center on semester-long design projects, surprising, clever, and unexpected ideas can always be expected.

Students with toys: Not just playing around