Visualizing the abstract: A life in computer science 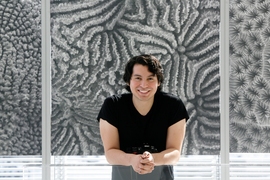 Programming has fascinated senior computer science and engineering major Walter Menendez since he was 10, and he first got his hands on the Mega Man franchise of video games. One game, in particular, features sentient avatars that could traverse a physical representation of the Internet, a virtual world in which “life is the same as technology,” Menendez recalls. Since that early exposure to augmented reality, it’s been a field he’s chased — and one that he finally got his hands on as an undergraduate at MIT.

Before he could get to the good stuff, though, Menendez had to make the rounds through basic programming and Web development. During his freshman year, he worked alongside then-graduate student Anthony DeVincenzi on a project to make data more social and accessible. As part of the Tangible Media Group in the MIT Media Laboratory, Menendez helped build a Web app where people could upload geospatial information — such as the location and impact of an earthquake, drought, or wildfire — onto an interactive map.

Staying true to the group’s name, there is a tangible aspect to the app: Users can hold an iPad up to a globe and project the data directly onto it; spin the globe, and the data will replot itself accordingly. For Menendez, a self-described visual learner, the experience set in stone that he was headed in the right academic direction.

It was also gave him his first experience solving a major technical problem that came up on the job. The team’s biggest issue was aggregating data: If they loaded every available data point onto a map, that load would likely crash the browser. Menendez recalls standing in front of a whiteboard with DeVincenzi one day, scribbling out equations and graphs to figure out a way to compress the data into averaged groups, rather than single points, that would change size depending on whether a user zoomed in or out.

In keeping with his visual roots, during his sophomore year Menendez moved on to a different group in the Media Lab, working on a project called Vision Blocks that involved making computer vision algorithms accessible to the general consumer. Vision Blocks hinges on using programming blocks of abstract code that can be dragged and dropped by a user to allow something like a webcam to monitor and react to changes in the external environment. The webcam could be programmed to send an email every time a person walked in front of it, for example.

But a trend in Menendez’s undergraduate experience has been what he calls “project-hopping”: Almost every time he joined a new lab, the project he was on would end, either because the graduate student he was working with would finish or the project would switch labs. If he were to do MIT over again, he says he would try harder to find a lab to really settle down in.

As a junior, he was finally able to work on one project for an entire year — and one that involved augmented realities, his first true love in computer science. LuminAR is what Menendez calls “a combination of a projector, a camera, and [an Xbox] Kinect sensor” that formed a touch-based interface that could respond to outside stimuli. LuminAR can convert any flat surface into a computer, so long as the surface can be projected onto, and Menendez was charged with bringing this technology into the realm of 3-D gamelike experiences.

Using browser graphics, he was able to render a virtual light source that can respond to real objects placed on its surface, generating a realistic shadow. He’s quick to whip out his phone and share a video of the process in action: It appears that a light hanging over a table is casting a shadow under Menendez’s hand, a shadow that moves when his hand moves. In reality, however, the light is coming from within the projected image, and adjusting in real time to his movements.

“I was literally fulfilling my childhood dream with this project,” he says.

For Menendez, a first-generation college student, his MIT experience has been somewhat surreal. He’s used photography, a hobby that’s in keeping with his visual inclinations, to balance the intensity of academics.

Data visualization, a departure from his original interests, has become his new niche; an experience the summer following his sophomore year was initially what got him hooked. He landed a gig at Tumblr in New York, where he embarked on a data science internship. He helped build an algorithm that the website could use to more precisely predict and calculate trending topics. As is, trends are calculated by counting how many times a certain tag is used within a 24-hour period. But by that metric, tags that go from appearing once or twice to several hundred times are considered trending, and on a website with a few million new posts a day, that didn’t seem right to Menendez.

He reconfigured a trend-calculating algorithm based on search traffic — counting what users are looking for before it has necessarily even been generated on the website.

“It’s kind of a chicken-and-egg situation,” Menendez says. “Content that people are looking for isn’t being generated as quickly as it’s being searched for.”

Calculating trending topics in this way would allow Tumblr to know what’s trending much more quickly than relying on tag counts.

“Rarely do undergrads get exposed to the experience of working in industry, as opposed to lab research,” he says. “For me that experience was what really got me excited about data science and data engineering as a field."

Next year, Menendez will return to New York, working as a data engineer for Buzzfeed. His job will center around building Web-based infrastructure and algorithms to assess how people use the site — in particular, analyzing which visual aspects succeed, based on metrics like their color, content, and motion.

“It’s data, it’s photography, it’s visualization. It’s all there,” Menendez says of his forthcoming job. “Things are looking like they’re going in the right direction, and I didn’t think that would happen any time soon.”

Learning by teaching in a different culture