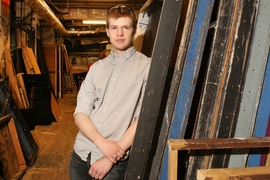 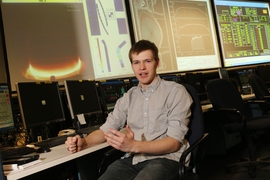 Several years ago, as an incoming freshman, current MIT senior Sterling Harper had no inkling that he’d find his passion in writing nuclear engineering software. But after signing up on a whim for a pre-orientation program with the Department of Nuclear Science and Engineering (NSE), Harper was hooked, and is now set to graduate from a five-year program with bachelor’s and master’s degrees in the field next year.

Since Harper had no prior coding experience or specific interest in nuclear energy, it was NSE’s vibrant social community that initially drew him in, and has since kept him motivated in a field with dauntingly steep learning curves.

“I think the nuclear department is one of the best-kept secrets at MIT,” Harper says.

Harper’s first research experience at MIT was in nuclear fusion, the release of energy that comes from combining atoms. Working with an actual fusion reactor on campus in the Plasma Science and Fusion Center, Harper says his first exposure to nuclear energy felt as big as what he imagines NASA’s mission control might be like.

Sitting in a control room surrounded by walls covered with screens of incoming data, Harper would hear a voice every 30 minutes or so declare, “Entering pulse.” The building would then shake as the reactor took a shot.

“It was pretty exciting, but I was over my head, honestly,” Harper recalls of his freshman research experience.

Despite the work being easy to connect to on a visceral level from the control room, the theory behind it wasn’t clicking. Just as he was considering switching labs, his advisor left MIT for Oxford University, providing Harper with the perfect opportunity to try his hand at a new aspect of nuclear engineering the summer after his sophomore year.

He joined the Computational Reactor Physics Group as an undergraduate researcher almost immediately, getting a chance to swing to the opposite end of the field: nuclear fission, or the splitting of atoms. That’s “normal nuclear power,” Harper says. The fit was so much better that Harper hasn’t switched labs since, and is now completing research for his master’s thesis as part of the group, still under the mentorship of Benoit Forget, an associate professor of nuclear science and engineering.

For the past few years, Harper’s energy has gone toward modeling nuclear reactors, writing software that can calculate how many neutrons are in a reactor and designing tools to determine the reactor’s safety, failure modes, power potential, and radioactive waste production. While this theory-based work is more abstract than experimenting with the talking, shaking fusion reactor, Harper says that solving computational problems and seeking out coding bugs is like working on a consistently thrilling puzzle.

Reactor designs are commonly based on hexagons, with internal fuel assemblies stacked together in this geometric shape. This sounded simple enough to Harper when he first joined his current lab, but ended up taking a whole year to simulate well.

“A lot of the papers I tried reading [as a sophomore] were sort of impenetrable, and when I got into my project, it ended up taking me a year just to get all the bugs out,” he says.

Possibly because of the theoretical nature of computational work, it wasn’t until this past summer, when Harper worked in a lab in the Czech Republic — a reactor facility — that the field truly clicked for him. Being able to see his computational work manifested in actual reactors made the research that much easier to comprehend.

“It was at that point that I could understand the theory behind everything I was doing,” Harper says. “It seemed more real suddenly.”

His master’s thesis research is now heavy on theory. The linchpin of his current project is modeling derivatives of reactor power according to changing temperature, a much more abstract concept than modeling reactors under finite conditions. The project edges into a field called “multiphysics,” which Harper calls “a big mess of information that models what’s really going on inside all parts of a reactor at once.” While it was previously only possible to model one piece of a reactor at a time, nuclear engineers can now simultaneously determine how heat is generated by the fuel, how it’s transferring to the reactor, and how many neutrons are produced.

This summer, Harper will continue to work with computer modeling, at Idaho National Laboratory, but from a slightly different angle: Rather than building tools to determine where inside the reactor fission is occurring, he will focus on how those reactions generate heat, move through the reactor, and deform fuel.

With events like the 2011 Fukushima nuclear disaster in the not-too-distant past, the debate over nuclear energy’s safety isn’t lost on Harper, even as he continues to forge his way into the field. It’s a perspective he gleaned from a course he took during his junior year, taught by assistant professor of nuclear science and engineering Scott Kemp, which focused on the social impacts of nuclear energy, such as weapons proliferation and public health risks.

The class was new at the time, and caused momentary doubt for Harper about his choice of field. But the course also discussed both how to solve some of these problems, and what the current energy alternatives are — which is ultimately what convinced him to stick with his research.

“People are mostly worried about a nuclear reactor malfunctioning and hurting thousands of people,” he says. “But the current alternative is coal, and my response would be that coal is harmful to people even when it is working properly.”

With all this in mind, Harper sees the computational models he is helping to build not as reasons to rely on nuclear energy, but rather as tools to better determine if producing nuclear energy is, in fact, too risky.

Lulu Li: Modeling the maelstrom inside a reactor