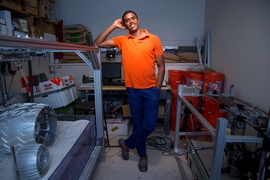 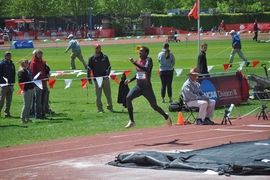 Senior Carrington Motley spends a lot of his time at MIT surrounded by sand.

“Yeah, sand is everywhere,” he admits with a laugh. “It was already in all of my clothes, and now it’s in my backpack.”

Motley, a mechanical engineering major, is captain of MIT’s men’s track and field team — and when he isn’t launching himself into a sand pit during triple-jump practice, he conducts research on how tires move through sand.

Motley didn’t always know he would end up at MIT, nor did he expect to enter his senior year less than a foot away from MIT’s varsity triple-jump record. As a sophomore at Sewickley Academy in Pennsylvania, after a long basketball season, a teammate of his persuaded him to try track and field.

Motley developed into a competitive triple jumper, and when he began to look at colleges, he knew he needed to find a place where he could excel as both a student and an athlete without sacrificing either. A visit to MIT made it clear that this was a place where his interests could coexist.

“People are on the team, they’re in engineering, they’re in fraternities, they are in running clubs, they are doing everything,” he explains. “And there is no compromise to be made by being an athlete and studying STEM [science, technology, engineering, and mathematics].”

By the end of the fall of his senior year in high school, MIT was at the top of Motley’s list.

Once on campus, Motley joined the research group of Ken Kamrin after taking an introductory mechanics course taught by the assistant professor of mechanical engineering. His work in the lab involves testing a model that’s based on linear superposition and designed to optimize the mechanics of tires moving through sand. The goal is to design, for example, tires that achieve maximum velocity output for minimum power input; Motley describes far-reaching applications that range from dune buggies or rovers for use on a beach, or in space, to military vehicles that drive in the desert.

Mars or moon rovers that drive on a granular surface present a unique challenge: “They’ve had a lot of issues with tires getting stuck, or a robot not being able to move because it’s stuck in sand,” Motley says. “You can’t do anything and you just have to wait because it’s really far away.”

Motley works with Jake Slonaker ’15, a graduate student in Kamrin’s lab who has used the MATLAB computing environment to develop a computer model that can predict the forces that will act on a tire moving through sand. This simplistic model runs simulations in order to optimize the shape of a tire tread to drive in sand, which is much more efficient and generalizable than many of the models currently used by the military and NASA.

“Right now the process for determining what wheel to use is to try wheels in sand and figure out what works,” Motley says. “Our model allows you to build and test a bunch of different wheels on your computer and figure out the one that’s best.” Motley first ran verification tests to ensure that the real-world results match up with the model.

Motley conducts his tests in a basement lab that contains a pair of 3-foot-by-8-foot glass containers filled with 2 feet of sand. Each container is outfitted with a motor and a chassis on a system of rods, which allows a tire to move forward and backward, and up and down through the sand. The setup has sensors that record the torque and velocity of a tire as it travels, which can then be compared to the results of the model. Motley uses computer-assisted design (CAD) software to design the tires, and 3-D prints them in the lab.

Motley particularly enjoys the technical nature of his research at MIT: “Here you have to think a little bit more, because you have no previous attempts to guide your way,” he says. After graduating from the Institute next June, Motley expects to pursue an advanced degree.

“I feel that my time at MIT has made me aware of, one, how much I know, but two, that I really don’t know anything,” he says. “There’s just so much more that you could learn, and I think that knowledge is super-powerful.”

When Motley isn’t shaking sand out of his possessions, he is involved in a number of other activities at MIT. As a freshman he participated in the Freshman Urban Program, a pre-orientation program that focuses on service in the surrounding community in Boston and Cambridge. The program also incorporates discussions of sexual and gender identity, privilege, life after college, and how to remain involved in service.

“It’s just a really nice period, before coming to school, to reflect on who you are and what you believe in and how that interfaces with other people’s beliefs,” Motley says.

Motley enjoyed the program so much that he returned as a counselor for the following two years; last year, he served as co-coordinator with classmate Annie Kuan. He and his co-coordinator were given free rein in their decisions about the program. “Every last detail was left entirely up to us,” he says.

Motley currently holds MIT’s freshman indoor triple-jump record, and was recently named to the NCAA Academic All-American team. He credits his athletic success to the support of those around him, particularly the dedicated MIT coaching staff. But he says he owes his success in the classroom to the love and unwavering support of his family.

That said, Motley is not quite satisfied yet, pointing out a scoreboard with names on the indoor track in MIT’s Johnson Athletic Center: “When you get a [varsity] record, you get your name up there, and everyone gets to look at it every day of the year,” he says. “Every time I see it, it’s motivation to find a little bit extra somewhere to hopefully get my name up there.”

“I always find ways to improve myself,” Motley adds, “whether that’s improving myself in the classroom, improving my relationships with teammates, improving upon performances in track or finding ways to give a little something back.”