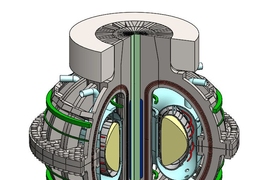 ↓ Download Image
Caption: A cutaway view of the proposed ARC reactor. Thanks to powerful new magnet technology, the much smaller, less-expensive ARC reactor would deliver the same power output as a much larger reactor.
Credits: Illustration courtesy of the MIT ARC team 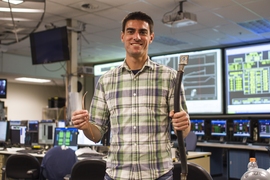 ↓ Download Image
Caption: MIT PhD candidate Brandon Sorbom holds REBCO superconducting tapes (left), which are the enabling technology behind the ARC reactor. When it is cooled to liquid nitrogen temperature, the superconducting tape can carry as much current as the large copper conductor on the right, enabling the construction of extremely high&#8209;field magnets, which consume minimal amounts of power.
Credits: Jose-Luis Olivares/MIT

Caption:
A cutaway view of the proposed ARC reactor. Thanks to powerful new magnet technology, the much smaller, less-expensive ARC reactor would deliver the same power output as a much larger reactor.
Credits:
Illustration courtesy of the MIT ARC team

Caption:
MIT PhD candidate Brandon Sorbom holds REBCO superconducting tapes (left), which are the enabling technology behind the ARC reactor. When it is cooled to liquid nitrogen temperature, the superconducting tape can carry as much current as the large copper conductor on the right, enabling the construction of extremely high&#8209;field magnets, which consume minimal amounts of power.
Credits:
Photo: Jose&#8209;Luis Olivares/MIT

It’s an old joke that many fusion scientists have grown tired of hearing: Practical nuclear fusion power plants are just 30 years away — and always will be.

But now, finally, the joke may no longer be true: Advances in magnet technology have enabled researchers at MIT to propose a new design for a practical compact tokamak fusion reactor — and it’s one that might be realized in as little as a decade, they say. The era of practical fusion power, which could offer a nearly inexhaustible energy resource, may be coming near.

The stronger magnetic field makes it possible to produce the required magnetic confinement of the superhot plasma — that is, the working material of a fusion reaction — but in a much smaller device than those previously envisioned. The reduction in size, in turn, makes the whole system less expensive and faster to build, and also allows for some ingenious new features in the power plant design. The proposed reactor, using a tokamak (donut-shaped) geometry that is widely studied, is described in a paper in the journal Fusion Engineering and Design, co-authored by Whyte, PhD candidate Brandon Sorbom, and 11 others at MIT. The paper started as a design class taught by Whyte and became a student-led project after the class ended.

The new reactor is designed for basic research on fusion and also as a potential prototype power plant that could produce significant power. The basic reactor concept and its associated elements are  based on well-tested and proven principles developed over decades of research at MIT and around the world, the team says.

Fusion, the nuclear reaction that powers the sun, involves fusing pairs of hydrogen atoms together to form helium, accompanied by enormous releases of energy. The hard part has been confining the superhot plasma — a form of electrically charged gas —  while heating it to temperatures hotter than the cores of stars. This is where the magnetic fields are so important—they effectively trap the heat and particles in the hot center of the device.

While the new superconductors do not produce quite a doubling of the field strength, they are strong enough to increase fusion power by about a factor of 10 compared to standard superconducting technology, Sorbom says. This dramatic improvement leads to a cascade of potential improvements in reactor design.

The world’s most powerful planned fusion reactor, a huge device called ITER that is under construction in France, is expected to cost around $40 billion. Sorbom and the MIT team estimate that the new design, about half the diameter of ITER (which was designed before the new superconductors became available), would produce about the same power at a fraction of the cost and in a shorter construction time.

But despite the difference in size and magnetic field strength, the proposed reactor, called ARC, is based on “exactly the same physics” as ITER, Whyte says. “We’re not extrapolating to some brand-new regime,” he adds.

Another key advance in the new design is a method for removing the the fusion power core from the donut-shaped reactor without having to dismantle the entire device. That makes it especially well-suited for research aimed at further improving the system by using different materials or designs to fine-tune the performance.

In addition, as with ITER, the new superconducting magnets would enable the reactor to operate in a sustained way, producing a steady power output, unlike today’s experimental reactors that can only operate for a few seconds at a time without overheating of copper coils.

Another key advantage is that most of the solid blanket materials used to surround the fusion chamber in such reactors are replaced by a liquid material that can easily be circulated and replaced, eliminating the need for costly replacement procedures as the materials degrade over time.

“It’s an extremely harsh environment for [solid] materials,” Whyte says, so replacing those materials with a liquid could be a major advantage.

Right now, as designed, the reactor should be capable of producing about three times as much electricity as is needed to keep it running, but the design could probably be improved to increase that proportion to about five or six times, Sorbom says. So far, no fusion reactor has produced as much energy as it consumes, so this kind of net energy production would be a major breakthrough in fusion technology, the team says.

The design could produce a reactor that would provide electricity to about 100,000 people, they say. Devices of a similar complexity and size have been built within about five years, they say.

“Fusion energy is certain to be the most important source of electricity on earth in the 22nd century, but we need it much sooner than that to avoid catastrophic global warming,” says David Kingham, CEO of Tokamak Energy Ltd. in the UK, who was not connected with this research. “This paper shows a good way to make quicker progress,” he says.

The MIT research, Kingham says, “shows that going to higher magnetic fields, an MIT speciality, can lead to much smaller (and hence cheaper and quicker-to-build) devices.” The work is of “exceptional quality,” he says; “the next step … would be to refine the design and work out more of the engineering details, but already the work should be catching the attention of policy makers, philanthropists and private investors.”

Olga Kharif writes for Bloomberg Businessweek that MIT researchers have proposed a new design for a smaller and cheaper fusion reactor. The prototype "builds on the design of fusion reactors that use magnetic fields to squeeze superhot plasma, fusing atoms of hydrogen to produce energy."

Don Willmott writes for The Huffington Post about a theoretical design for a compact fusion reactor created by MIT researchers. “The MIT reactor should ultimately be able to produce five to six times the energy it consumes, MIT's scientists say, about 190 megawatts,” explains Willmott.

Andrew Revkin writes for The New York Times about a compact design for a fusion reactor that could make fusion power a possibility within a decade. Revkin highlights how the research originated from an MIT course, writing, “it’s exciting to see academia integrating directly with innovation on this scale.”

The future of fusion power