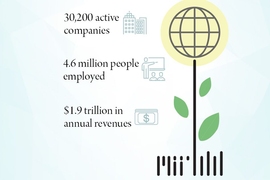 A report released today by MIT underscores the substantial economic impact of the Institute’s alumni entrepreneurs, whose companies have created millions of jobs and generate annual revenues of nearly $2 trillion — a figure greater than the gross domestic product (GDP) of the world’s 10th-largest economy.

In 2009, Edward Roberts, the David Sarnoff Professor of Management at the MIT Sloan School of Management, co-authored a report estimating that, as of 2006, MIT alumni had founded 25,800 active companies worldwide, employing 3.3 million people and generating nearly $2 trillion in annual revenues.

Today’s report updates those figures: As of 2014, the report estimates, MIT alumni have launched 30,200 active companies, employing roughly 4.6 million people, and generating roughly $1.9 trillion in annual revenues. That revenue total falls between the world’s ninth-largest GDP, Russia ($2.097 trillion), and the 10th-largest, India ($1.877 trillion), according to 2013 data on those and other countries from the International Monetary Fund.

“The report confirms what has long been clear: Our community’s passion for doing, making, designing and building is alive and growing,” President L. Rafael Reif wrote in an email today to the MIT community. “As we do our part by continuing to foster our students’ natural creativity and energy, it is inspiring to see the potential our alumni hold to extend MIT’s power to do good for the world.”

Roberts’ co-author on the new report is Fiona Murray, the Bill Porter Professor of Entrepreneurship and an associate dean for innovation at MIT Sloan, assisted by J. Daniel Kim, a doctoral student at MIT Sloan. The report was supported by the MIT Innovation Initiative, a campus-wide collaboration, launched by President L. Rafael Reif, that focuses on innovation analysis and creating programs that encourage entrepreneurship. Murray is co-director of the MIT Innovation Initiative.

Furthermore, the new report outlines key entrepreneurial trends (such as the declining age of entrepreneurs) and alumni contributions to company growth and innovation (such as patents filed).

Among other things, the results indicate recent growth in entrepreneurship among MIT’s graduates. In the 2000s, alumni launched around 12,000 new companies; halfway through the current decade, the number of new firms started has already reached 9,100. According to the report, by the end of the decade, there could be 18 companies formed for every 100 alumni, a jump from 13.4 companies per 100 alumni in the 2000s. These changes mirror the internal growth and development of MIT’s broad entrepreneurship education and nurturing programs, accelerated in the 1990s by the formation of the MIT Entrepreneurship Center (now renamed the Martin Trust Center for MIT Entrepreneurship).

“Overall our new findings indicate that MIT alumni … are engaged in entrepreneurship and innovation (E&I) at ever-increasing rates. And they do so at earlier and earlier stages in their lives,” the authors write in the report, which does not include the growth of new firms founded by non-alumni MIT faculty and staff.

For the study, the researchers surveyed MIT’s 104,000 living alumni. From a sample size of 19,730 respondents, they added up 5,534 alumni-founded companies in several sectors: energy and utilities, health and medicine, biotechnology and medical devices, computer hardware, engineering, manufacturing, and software — which was the most popular sector, representing 18 percent of all companies. The numbers were validated by a telephone survey of non-respondents to the earlier web survey.

Extrapolating from that data, they estimated the total number of companies (30,200) across the entire alumni base, as well as employment and revenue data. The researchers excluded companies that are no longer active, as well as numerous large companies, such as Hewlett-Packard, Intel, Raytheon, and Texas Instruments, whose co-founders are deceased.

The results described in the report fall into three main topics: economic impact, including company location and longevity, and employment and revenue data; entrepreneurial trends, including the ages and genders of founders; and contributions outside entrepreneurship, including filing patents and supporting company growth.

Key results for entrepreneurial impact and trends are:

MIT entrepreneurs also favor the East and West coasts: More than 30 percent of all the surveyed companies are located in Massachusetts, with 8 percent in Cambridge; 20 percent are located in California. Around 23 percent operate in other countries.

Notably, the report indicates a declining age of MIT alumni founders, with the median age of first-time entrepreneurs decreasing steadily over the last eight decades. The age dropped from 39 for alumni who graduated in the 1940s to 30 in the 2000s, with today’s median age for entrepreneurs being 27.

The researchers suggest that this age shift could be due, in part, to the declining costs of starting a company (with cloud computing, new Web tools, and crowdfunding lowering costs), as well as easier access to capital. They also note a more likely reason: the increased enrollment over the past decade in MIT’s entrepreneurial classes and business plan competitions, reflecting broad changes in the career aspirations of MIT students.

The report also looked at other MIT alumni contributions to innovation, including filing patents and supporting company growth.

Key findings for contributions outside entrepreneurship are:

In explaining the early-stage employee data, the report states that employees who join a young company team in its first two years of operation are often as crucial as the founders to growing these businesses.

“For innovation-driven startups, the ability to enter and potentially disrupt a market requires not only innovative ideas, but also productive workers to commercialize and execute those ideas,” the researchers write. “Therefore, early employees are perhaps the most important asset for nascent companies, supplementing the co-founder teams.”

In an article for Forbes, Peter Cohen examines why the Cambridge area has become such a hub for startups. Cohen highlights how universities like MIT contribute to a region’s economic activity and to its supply of innovation and talent. He notes that, “by 2014 MIT alumni had created 30,200 companies with $1.9 trillion in revenue.”

A new report details the entrepreneurial impact of MIT’s alumni entrepreneurs, reports Hiawatha Bray for BetaBoston. “We’re seeing a more rapid rate of growth than we have ever seen before,” explains Prof. Edward Roberts, in the “growth in the formation and startup of new companies by MIT alumni.”