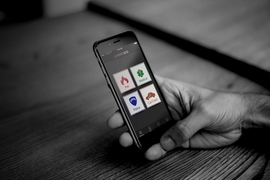 According to the Federal Communications Commission (FCC), around 70 percent of 911 calls today are made via mobile phones. Yet when fielding such calls, dispatchers rely on landline-based systems that sometimes fail to pinpoint a mobile caller’s location quickly — or at all — during time-sensitive emergencies. Experts have estimated that 60 percent of 911 calls come through with inaccurate or no location data.

Now RapidSOS, a startup with MIT roots, is gearing up to release a one-touch 911 app that automatically sends location and preset medical data from a smartphone to dispatch centers, with aims of drastically reducing the time it takes first responders to get to a scene.

In that way, RapidSOS acts as a fast “data pipeline” for 911, says Chief Technology Officer Nick Horelik PhD ’15, who co-founded the company and co-developed the app with Michael Martin of Harvard Business School.

This is important, Horelik adds, as smartphone location data are increasingly becoming extremely precise. “Location services will [soon] get down to inches instead of feet,” Horelik says. “We’re providing the pipeline to get that data to dispatchers.”

Having tested the app in dispatch centers across the United States, RapidSOS is releasing its commercial app in December.

Individual consumers may download the app. But the “driving force” behind RapidSOS is insurance agencies, Horelik says, as advanced location services could save billions of dollars in hospital bills and other expenses, such as damages caused by house fires. A 2014 study by the FCC that analyzed 73,706 emergency incidents in the Salt Lake City area, for example, estimated that improved location accuracy could get ambulances to a scene one minute quicker, across the nation, and save approximately 10,120 lives and $92 billion annually.

In the future, Horelik says, the core technology could be used for home alarm systems or to develop a “panic button” for use at convenience stores, banks, or teachers’ desks.

An “accurate picture” of location

More than 6,000 emergency dispatch centers across the United States are using computer-aided dispatch (CAD) systems developed in the 1960s and 1970s. These systems primarily use cell tower triangulation to determine a caller’s location. But this isn’t very accurate, and sometimes calls drop before the system gets fixed coordinates.

“The phone call will always go to the dispatch center the cell tower is connected to,” Horelik explains. “When you end up at the wrong center, they don’t have the radio system or maps to find out where you are, so they need to connect to a local dispatch center that knows.”

This could take several minutes. If you call from, say, the MIT campus, you’ll automatically be directed to the state police in Framingham. Once you say you’re in Cambridge, your call will be transferred to a dispatch center in Kendall Square to further explain your location and situation.

RapidSOS, on the other hand, leverages all location tools in smartphones — such as GPS, Bluetooth, wireless hotspot data, and even the barometric sensor in newer phones that measures altitude — to accurately pinpoint a caller’s location.

“The phone itself has a very accurate picture of where the user is,” Horelik says.

The app gathers and sends that location data and any preset medical information — such as allergies and current medications, hospital affiliations, and emergency contacts — over Bluetooth, wireless, or cell networks. This data is routed to RapidSOS servers, which patch it through to the nearest emergency center. If the phone dies or service is interrupted, RapidSOS maintains the connection and keeps uploading updated location information. Users may also send texts to dispatch centers universally; today only a limited number of U.S. dispatch centers can receive texts. Loved ones also receive emergency alerts.

All information pops up on the CAD software the same as incoming calls, so no new equipment or training is required. “Emergency centers don’t even need to know we exist,” Horelik says.

Users can also set the app to automatically power the phone’s camera to stream video to the RapidSOS servers. Today only around 12 percent of dispatch centers have systems that can accept video, Horelik says, but RapidSOS is working on making live streaming video part of any 911 call.

“In general, we have a lot of data to get to dispatch centers, and we’re always looking for new ways to get that across,” Horelik says.

Before coming to MIT, Horelik volunteered for a suicide prevention hotline at Tufts University. In that job, he realized, even if he wanted to send help, he had no idea where a caller was located. “That [was] in the back of my mind for a while,” he says.

As a graduate student in the Department of Nuclear Science and Engineering, Horelik took on an entrepreneurship minor through the MIT Sloan School of Management. This led to a volunteer spot as an organizer for the MIT Clean Energy Prize, where he met Martin, then president of the Harvard Energy Club, who had personal experiences with 911 delays.

The two bonded over the outdated 911 dispatch systems and began brainstorming about a one-touch app that could collect and send location data. “I realized this sort of problem is in line with my skill set,” says Horelik, whose engineering feats also included co-developing the MIT BEAVRS pressurized water reactor benchmark that contains real nuclear plant data, and writing nuclear reactor simulations for supercomputers.

Over the next few years, RapidSOS won or placed in nearly every major business competition across the nation, Horelik says, including the MIT $100K Entrepreneurship Competition. “We were a company seed-funded by competitions,” he says.

In August, RapidSOS earned its first round of funding for $5 million and relocated its headquarters from the iLab to New York.

Co-leading a rising startup with 15 employees, Horelik still looks back on the entrepreneurial lessons he learned at MIT Sloan — such as from Bill Aulet, senior lecturer at MIT Sloan and managing director of the Martin Trust Center — to navigate the murky waters of growing a business. “We’ve been growing a lot since [MIT], and it’s every week I say, ‘Oh yeah, that thing that Bill Aulet said is very, very true,’” he says.

TechCrunch reporter Ingrid Lunden highlights RapidSOS, an MIT startup that “helps increase the funnel of information that is transmitted to emergency services alongside a call for help.”