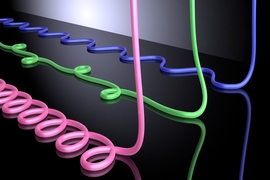 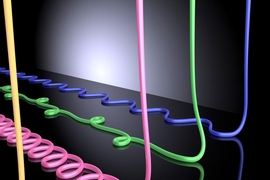 Drizzling honey on toast can produce mesmerizing, meandering patterns, as the syrupy fluid ripples and coils in a sticky, golden thread. Dribbling paint on canvas can produce similarly serpentine loops and waves.

The patterns created by such viscous fluids can be reproduced experimentally in a setup known as a “fluid mechanical sewing machine,” in which an overhead nozzle deposits a thick fluid onto a moving conveyor belt. Researchers have carried out such experiments in an effort to identify the physical factors that influence the patterns that form.

Now a group of mathematicians at MIT, Cambridge University, and elsewhere have developed a simple model to predict patterns formed by viscous fluids as they fall onto a moving surface.

The researchers looked at four patterns — sinusoidal waves; repeating and alternating loops; and straight lines — and observed that the pattern formed depends on the ratio between the fluid’s speed on impact and the speed of the conveyor belt. The team found that this ratio influences a fluid’s shape, or curvature, just before hitting the surface, which in turn determines the pattern that forms.

The team used its model to create simulations of viscous flow; these simulations matched the patterns produced in previous experiments by others.

The simple geometrical model may be easily integrated into computer graphics simulations to create realistic videos of viscous liquids like honey and oil. The model may also be used to optimize manufacturing processes for products such as nonwoven materials — synthetic fabrics that are manufactured through an injection process that sprays polymers onto a conveyor belt, in patterns meant to resemble woven textiles.

Pierre-Thomas Brun, an instructor in MIT’s Department of Mathematics, says the geometrical model provides a simple method to both predict and create patterns from viscous fluids.

“We’re getting at the core of pattern formation, and explaining why transitions from pattern to pattern occur, with a very minimalistic model,” Brun says. “With this method, you can have a 3-D printer inject your polymer and just move the belt at the appropriate speed, and you can get the patterns you want.”

Brun and his colleagues have published their results this week in the journal Physical Review Letters.

In 2012, researchers at the University of Toronto carried out a fluid mechanical sewing machine experiment, drizzling a viscous fluid onto a progressively slowing conveyor belt. The experiment showed that as the belt starts, moving rapidly, the fluid forms a straight line as it hits the surface. As the belt slows, the fluid, flowing at the same rate, starts to meander in a wavelike pattern, then form alternating loops, and then finally, repeating loops, as the conveyor belt grinds almost to a halt.

Brun and others have studied these experimental results, and have since come up with a detailed numerical model, called “discrete viscous robes numerics,” to describe the resulting patterns, depending on factors such as fluid height, viscosity, and gravity. But Brun says this model, though precise in its predictions, contains many equations that are complex to solve.

Instead, he and his group sought to “boil down” the dynamics of viscous flow into a simpler, workable model, mainly by doing away with a complex variable: inertia, an object’s resistance to any change in motion. For instance, in the case of the fluid mechanical sewing machine, the rotation of the thread generates centrifugal forces in the coil that forms on the conveyor belt.

Brun chose to model the system without inertia, in a scenario in which fluid flows from a very small height — a scenario in which the fluid stretches under the force of gravity, but inertia does not play a role. Under these conditions, he observed that the patterns formed were the same as those created with the full, inertia-driven numerical model — a sign that something other than inertia was determining pattern formation.

Digging into the “heel” of the problem

Brun and his colleagues found that the crux of the issue came down to what they termed the “heel” of the flow — the point just before impact, when a fluid curves slightly, forming a heel-like shape. The researchers found that the patterns formed on the conveyor belt depend on the shape of the fluid heel. They noted the shape, or curvature, of the heel was determined by the distance and orientation between two points: the point at which the fluid first contacts the surface, and the point directly below the nozzle.

These two properties shape the curvature of the fluid as it hits the belt. The group also found that the resulting curvature determines the new angle and impact point of the fluid — a phenomenon that induces a “memory” effect in the fluid.

“Memory is usually induced by inertia, but despite the fact that here there is no inertia, we still maintain this idea of memory, which is essential for formation of patterns,” Brun says. “It’s really embedded in these geometry features. Otherwise, the patterns would just be random.”

Brun and his colleagues used their model to simulate the fluid mechanical sewing machine scenario, changing the shape of the heel in response to the speed of the conveyor belt. They produced four main patterns — waves, straight lines, and alternating and repeating loops — that matched the patterns generated by the more detailed numerical model.

The researchers say their simplified model may be geared toward optimizing a novel class of microfabrication techniques for manufacturing extremely small, tailorable textured fibers.

“We now have a very powerful tool we can use to get to the core of the experiment, to get deeper into the way these patterns are formed,” Brun says.

Dominic Vella, an associate professor of applied mathematics at Oxford University, says, “What is really important and elegant about this paper is that they have reduced the problem to a much simpler formulation. This means that they are able to gain new understanding of the process, especially the crucial role of geometry.”

Vella, who was not involved with the research, sees multiple applications for the model.

“It could be a useful practical tool for understanding how fast telecommunications cables can be laid down, and at the other end of the spectrum, what parameter regimes should be used to obtain a particular pattern in nonwoven textiles,” he says. “At the frivolous end, perhaps one could make an iPhone app that would tell you how fast to ice a cake to get a given pattern.”

This research was funded in part by the European Research Council.