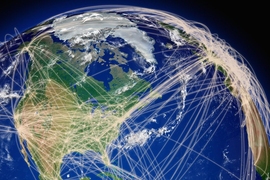 Every time you’ve seen a plane take off or land at a hub airport, you’ve seen the world growing more connected, according to a new model developed by researchers at MIT.

In a study published in the journal Transportation Research Part E, the MIT team outlines a model that determines the degree to which regions around the world are connected via air transportation.

The researchers, at MIT’s Laboratory for Aviation and the Environment (LAE), analyzed flight schedules between 1990 and 2012 from more than 1,100 airlines connecting over 4,600 airports around the world. They also looked at 1.2 million tickets to gauge passenger behavior — such as the detours that passengers were willing to make to get to their final destination.

They observed that in 1990, airports in the U.S. were, by far, the best-connected. By 2012, thousands of airports around the world, particularly in Europe and Asia, emerged as access points to the global air transportation network, increasing global connectivity, or the links between regions, by 140 percent.

This exploding growth in global connectivity is due largely to the increasing availability and quality of indirect connections, in which passengers have to switch to a connecting flight to continue on to their destination.

Check out the MIT researchers' model that shows how air transportation connects regions around the world.

While overall, passengers generally prefer nonstop over one-stop flights, the researchers found that the number and quality of indirect connections grew faster than nonstop flights over this period. In part, they attributed this growth to increasing cooperation between airlines: Between 1990 and 2012, global airlines began to team up into multi-airline alliances, such as Oneworld, Sky Team, and Star Alliance. These alliances offer “code-sharing” flights — connecting flights involving two airlines, sold to passengers on a single ticket.

The researchers note that such code-sharing provides global “seamless travel” options for passengers at the point of sale. For example, to get from Newark, N.J., to Singapore, a passenger might purchase a ticket through United Airlines, which is part of an alliance that includes Lufthansa. The ticket may involve a connection in Frankfurt where the passenger switches from a United aircraft to a Lufthansa aircraft — so the cooperation between those two airlines connects Newark to more destinations throughout the world.

Robert Malina, a research scientist in MIT’s Department of Aeronautics and Astronautics and LAE’s associate director, says the rising impact of connecting flights on global connectivity is a somewhat counterintuitive and surprising one.

“Even if you take into account that one-stop flights have a lower value for passengers because they involve additional travel time, we still find that one-stop flights become more important over time in connecting regions,” Malina says. “It’s easier to transfer these days, because the airlines are cooperating better than they were in the ’90s. So we get a lot of indirect connectivity. That’s a striking result.”

For their model, the researchers analyzed 1.2 million ticketed flight itineraries, as well as flight schedules at over 4,600 airports. The flight schedules gave them an idea of the direct and indirect routes available to passengers, while ticket sales were used to measure passenger preferences — such as with respect to the maximum detour, or the most out-of-the-way connection, they were willing to accept in order to get to their destination.

Malina and his colleagues also evaluated the economic quality of the markets that surround destination airports, taking into account per-capita gross domestic product, the number of people, and their spatial distribution around the airport.

The group’s model computes a “global connectivity index” score for each airport in the years between 1990 and 2012. This score indicates the degree to which an airport is connected to the global air transport network; the researchers plotted how these connectivity scores changed over the period.

“It’s an interesting time period, because there was a lot of change in the global transportation network,” Malina says. “Let’s take Europe as an example: Back in the early 1990s, you had highly regulated markets. So if you were an Irish airline, you were able to fly from Ireland to other countries, but you were not able to offer services from Spain to Germany, for example.”

Indeed, the researchers’ results showed that in 1990, global nonstop and one-stop connectivity was highly concentrated at North American airports. By 2012, this concentration dropped, especially as European and Asian countries opened up their markets and were better integrated into the global air transport network.

“During this period, we particularly observed the rise of Asia,” Malina says. “Airports like Dubai and Beijing in the 1990s played no role whatsoever in generating global connectivity, and now they’ve become more important.”

Jan Brueckner, a professor of economics at the University of California at Irvine, says the team’s new metric for air transport connectivity improves on existing models, as it uses 20 years’ worth of data to track all possible trips out of a given city, and also measures the “value” of each destination.

“No researchers have produced such a comprehensive index spanning a large range of years,” says Brueckner, who was not involved in the research. “The study shows that connectivity is growing, and an important implication is that it will continue to grow. A policy implication of the study concerns the benefits of international airline alliances, whose ability to stimulate connectivity should be appreciated and fostered by regulators.”

Looking ahead, Malina hopes to apply the model to examine how certain changes in deregulation affect global connectivity, as well as how air transportation affects economic growth. The model may also help to understand how airlines enter and exit certain regional markets.

“For example, we can look at all the markets that United has opened up in the last couple years, and can look at the destination quality, and we might be able to tell that United only enters markets that have certain properties,” Malina says. “So there are a lot of applications for transportation science, regional economics, and also for management scholars.”

The research was funded in part by the German Research Foundation and MIT’s Airline Industry Consortium.