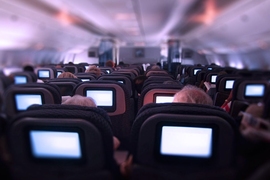 Credits:
Stock Image
Consider the last time you dealt with an airline service mishap: a bag lost in transit, a flight delayed or canceled, or an overbooked plane. Are you more or less likely to make a formal complaint about service quality if you’re flying on a long-established “network” carrier or a newer, budget-friendly airline?

According to a new MIT study, passengers of low-cost upstarts tend to complain less, even though the quality of service may be the same as more expensive airlines.

In a study published in the Journal of Air Transport Management, Michael Wittman, a graduate student in MIT’s International Center for Air Transportation, tallied airline-related complaints made to the U.S. Department of Transportation (DOT) from 2002 to 2012. He found that regardless of the type of service failure, passengers complained up to 10 times more often about network carriers than low-cost carriers.

Wittman says several factors may help to explain the discrepancy: Passengers of low-cost carriers may not be aware of the option to complain to the federal government, or expectations of service quality may be lower for cheaper flights. Additionally, front-line customer service — how airline agents address mishaps — may vary among airlines, with some low-cost carriers adopting a customer-friendly culture so as to minimize friction.

“For network carriers, this is an opportunity to improve, because they can say, ‘Operationally, we’re really not doing any worse than the other carriers, but some of our customers don’t like us as much, so what can we do to help solve those problems?’” says Wittman, who is studying civil and environmental engineering at MIT. “That’s one place where this research can be implemented.“

Reporting on the reporters

For his study, Wittman obtained data from the Air Travel Consumer Report — a monthly report by the DOT’s Airline Consumer Protection Division, which publishes service-quality data that airlines are required to submit to the DOT. Such data include the number of flight delays and cancellations, bags misplaced or lost, and passengers who voluntarily or involuntarily were denied boarding due to overbooked flights. The report also includes consumer complaints to the DOT in all these areas, which can be made in writing, by phone, through the agency’s website, or using the DOT’s mobile application.

The report is publicly available, and is frequently used as a resource for customer service research. For instance, the report’s data is compiled each year by researchers at Wichita State University and Purdue University in the Airline Quality Rating report, which is often cited by media outlets.

“Airlines spend tens of millions of dollars trying to make sure their schedules are constructed in such a way that they can meet the DOT definition of being on time, because they don’t want to be in last place in that column when the list comes out each year,” Wittman says. “So airlines are paying attention to this [data].”

‘No good headline’ from complaints

Wittman compiled airline service-quality data from 2002 to 2012, and performed a regression analysis to determine the relationships among different variables, such as how the number of bags lost by an airline in a given month relates to the number of complaints issued on the subject. He then charted the performance of 14 major airlines in 12 categories of service failures over a decade.

The data showed that while network carriers provided slightly worse service in some years than low-cost carriers, in general, both types of airlines misplaced a similar proportion of bags, and had similar numbers of flight delays and overbooked planes. But despite comparable levels of service, network carriers such as United Airlines and US Airways received disproportionately more complaints than smaller, cheaper airlines, like JetBlue and Southwest Airlines, even when Wittman controlled for differences in service quality.

Wittman observed a particularly stark difference between United and Southwest: Over 10 years, United received up to 10 times more complaints than Southwest regarding mishandled baggage, even though, empirically, the two airlines had similar rates of baggage-service failures.

“There’s research that suggests people’s expectations about service quality depend on how much they paid for their ticket,” Wittman offers as a possible explanation. “If I paid $500 for my flight from Boston to Los Angeles, I’d expect my bag to arrive on time, with no flight delays, and that I can actually get a seat because I’ve paid all these ancillary fees.”

Complaint rates may also swing in response to significant events, as Wittman found. From 2002 to 2012, the DOT complaint rate ranged from one to three complaints per 100,000 passengers — about the number of customers that fly out of Boston’s Logan International Airport in an average day. From aggregate data dating back to 1990, Wittman found that the overall complaint rate fell in the wake of the terrorist attacks of Sept. 11, 2001, and peaked in years such as 2007, when the U.S. air transportation network experienced congestion following an economic downturn that forced airlines to downsize their fleets.

Dean Headley, an associate professor of marketing at Wichita State University and a co-author of the annual Airline Quality Rating report, says that in some respects, it makes sense that low-cost carriers would receive fewer complaints than their more-expensive counterparts.

“Low-fare carriers have a simple promise and premise: low fares. And price is an indicator of quality,” Headley says. “For those companies that have a philosophical bent toward low-fare, lower frills versus a more full-service airline, the perceptions that people have out of those promises is different, and the numbers bear [that] out.”

Wittman says that to get a more comprehensive view of how consumer perceptions relate to actual service quality, it would be ideal to look through complaints submitted directly to individual airlines. But such information is proprietary.

“No one wants to pull back the curtains and say, ‘This is the number of times people complain about our service,’” Wittman says. “There’s no good headline that can be made out of that.”

Ultimately, Wittman plans to address a very practical question: Are customers who complain less likely to fly that airline in the future? While it’s too early to tell, he suspects the answer comes down to the lowest fare.

“It could be that people complain about an airline and say, ‘I’ll never fly that airline again: They lost my bag and were three hours late,” Wittman says. “But the next time they need to fly, the lowest fare is from that airline, and they may say, ‘I don’t like flying with them, but I’ll book with them anyway to save $20.’”

This study was supported by the MIT Airline Industry Consortium.