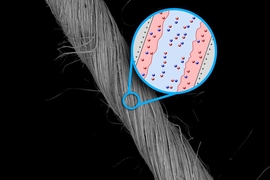 ↓ Download Image
Caption: Yarn made of niobium nanowires, seen here in a scanning electron microscope image (background), can be used to make very efficient supercapacitors, MIT researchers have found. Adding a coating of a conductive polymer to the yarn (shown in pink, inset) further increases the capacitor’s charge capacity. Positive and negative ions in the material are depicted as blue and red spheres.
Credits: Courtesy of the researchers 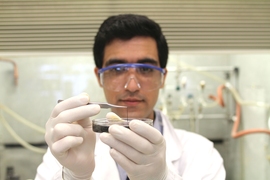 Caption:
Yarn made of niobium nanowires, seen here in a scanning electron microscope image (background), can be used to make very efficient supercapacitors, MIT researchers have found. Adding a coating of a conductive polymer to the yarn (shown in pink, inset) further increases the capacitor’s charge capacity. Positive and negative ions in the material are depicted as blue and red spheres.
Credits:
Courtesy of the researchers

Caption:
Seyed Mirvakili, lead author of the paper describing the niobium supercapacitors, examines a strand of the material in the lab.
Credits:
Photo: Craig Cheney

Wearable electronic devices for health and fitness monitoring are a rapidly growing area of consumer electronics; one of their biggest limitations is the capacity of their tiny batteries to deliver enough power to transmit data. Now, researchers at MIT and in Canada have found a promising new approach to delivering the short but intense bursts of power needed by such small devices.

The key is a new approach to making supercapacitors — devices that can store and release electrical power in such bursts, which are needed for brief transmissions of data from wearable devices such as heart-rate monitors, computers, or smartphones, the researchers say. They may also be useful for other applications where high power is needed in small volumes, such as autonomous microrobots.

The new approach uses yarns, made from nanowires of the element niobium, as the electrodes in tiny supercapacitors (which are essentially pairs of electrically conducting fibers with an insulator between). The concept is described in a paper in the journal ACS Applied Materials and Interfaces by MIT professor of mechanical engineering Ian W. Hunter, doctoral student Seyed M. Mirvakili, and three others at the University of British Columbia.

Nanotechnology researchers have been working to increase the performance of supercapacitors for the past decade. Among nanomaterials, carbon-based nanoparticles — such as carbon nanotubes and graphene — have shown promising results, but they suffer from relatively low electrical conductivity, Mirvakili says.

In this new work, he and his colleagues have shown that desirable characteristics for such devices, such as high power density, are not unique to carbon-based nanoparticles, and that niobium nanowire yarn is a promising an alternative.

“Imagine you’ve got some kind of wearable health-monitoring system,” Hunter says, “and it needs to broadcast data, for example using Wi-Fi, over a long distance.” At the moment, the coin-sized batteries used in many small electronic devices have very limited ability to deliver a lot of power at once, which is what such data transmissions need.

“Long-distance Wi-Fi requires a fair amount of power,” says Hunter, the George N. Hatsopoulos Professor in Thermodynamics in MIT’s Department of Mechanical Engineering, “but it may not be needed for very long.” Small batteries are generally poorly suited for such power needs, he adds.

“We know it’s a problem experienced by a number of companies in the health-monitoring or exercise-monitoring space. So an alternative is to go to a combination of a battery and a capacitor,” Hunter says: the battery for long-term, low-power functions, and the capacitor for short bursts of high power. Such a combination should be able to either increase the range of the device, or — perhaps more important in the marketplace — to significantly reduce size requirements.

The new nanowire-based supercapacitor exceeds the performance of existing batteries, while occupying a very small volume. “If you’ve got an Apple Watch and I shave 30 percent off the mass, you may not even notice,” Hunter says. “But if you reduce the volume by 30 percent, that would be a big deal,” he says: Consumers are very sensitive to the size of wearable devices.

The innovation is especially significant for small devices, Hunter says, because other energy-storage technologies — such as fuel cells, batteries, and flywheels — tend to be less efficient, or simply too complex to be practical when reduced to very small sizes. “We are in a sweet spot,” he says, with a technology that can deliver big bursts of power from a very small device.

Niobium is a fairly abundant and widely used material, Mirvakili says, so the whole system should be inexpensive and easy to produce. “The fabrication cost is cheap,” he says. Other groups have made similar supercapacitors using carbon nanotubes or other materials, but the niobium yarns are stronger and 100 times more conductive. Overall, niobium-based supercapacitors can store up to five times as much power in a given volume as carbon nanotube versions.

Niobium also has a very high melting point — nearly 2,500 degrees Celsius — so devices made from these nanowires could potentially be suitable for use in high-temperature applications.

In addition, the material is highly flexible and could be woven into fabrics, enabling wearable forms; individual niobium nanowires are just 140 nanometers in diameter — 140 billionths of a meter across, or about one-thousandth the width of a human hair.

So far, the material has been produced only in lab-scale devices. The next step, already under way, is to figure out how to design a practical, easily manufactured version, the researchers say.

“The work is very significant in the development of smart fabrics and future wearable technologies,” says Geoff Spinks, a professor of engineering at the University of Wollongong, in Australia, who was not associated with this research. This paper, he adds, “convincingly demonstrates the impressive performance of niobium-based fiber supercapacitors.”

The team also included PhD student Mehr Negar Mirvakili and professors Peter Englezos and John Madden, all from the University of British Columbia.

Surprising nanotubes: Some slippery, some sticky