Surprising nanotubes: Some slippery, some sticky 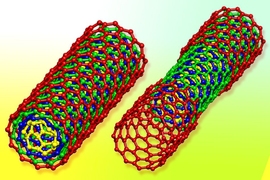 ↓ Download Image
Caption: This iIllustration shows how researchers tested the characteristics of multi-walled boron nitride nanotubes, which consist of several nested tubes that are each just one atom thick. When attached to a device that can pull apart the tube from its two ends, the outer tube cracks, allowing the concentric tubes to separate. Measuring the force required to pull the ends apart reveals the amount of friction between the layers.
Credits: Courtesy of the authors

Caption:
This iIllustration shows how researchers tested the characteristics of multi-walled boron nitride nanotubes, which consist of several nested tubes that are each just one atom thick. When attached to a device that can pull apart the tube from its two ends, the outer tube cracks, allowing the concentric tubes to separate. Measuring the force required to pull the ends apart reveals the amount of friction between the layers.
Credits:
Courtesy of the authors

Nanotubes — microscopic cylinders the shape of drinking straws, but just one-thousandth the diameter of a human hair — have been the subject of intensive research, with potential uses ranging from solar cells to chemical sensors to reinforced composite materials. Most of the research has centered on carbon nanotubes, but other nanotubes’ properties appear to be similar.

So it was quite unexpected when Lydéric Bocquet, a visiting professor in MIT’s Department of Civil and Environmental Engineering, conducted tests on carbon nanotubes (CNTs) and boron nitride nanotubes (BNNTs) and found that at least in terms of one key property, friction, the two seemingly identical types of tubes were not only different, but nearly opposite in their characteristics: CNTs are so slippery that they are described as having an extreme form of frictionlessness, called superlubricity. BNNTs, on the other hand, display a very high level of friction — a totally unexpected discovery.

The tests were carried out in an apparatus that allows a nanotube to be suspended between two supports, which can then pull it apart with precisely calibrated force. The tubes — actually a set of nested tubes, much like an old-fashioned telescope — eventually break under the strain. One or more of the tubes can be pulled out from within the others, like extending the telescope. The force needed to pull one tube out of the other can then be measured.

“It was a big surprise — we found a huge difference in friction,” Bocquet says. The findings are described in a paper in the journal Nature Materials, co-authored by Bocquet and four of his colleagues at the Université de Lyon in France. The work was part of an ongoing collaboration, called MultiScale Material Science for Energy and Environment, between MIT and the Centre National de la Recherche Scientifique in France.

The components of boron nitride — boron and nitrogen — flank carbon on the periodic table, so their properties tend to be quite similar, Bocquet points out. While BNNTs have been investigated before, the material is “less well known than carbon nanotubes,” he says. When you study the two side by side, he adds, they’re basically the same, except for their electrical properties: CNTs are conductors or semiconductors, while BNNTs are insulators. That’s why it was a shock to find “a huge difference, even though structurally they are essentially the same. There’s a hidden difference that we still do not fully understand.”

It’s unclear what practical applications the finding might have, Bocquet says, but he suggests that the high-friction tubes might be able to function as a kind of shock-absorbing material. “A large membrane of that material could dissipate a lot of energy,” he says. Ironically, the material has long been produced as an industrial lubricant: Apparently its bulk lubricating properties are very different from the interlayer friction seen in the lab experiments.

The differences between how materials behave in bulk and at nanoscale “is typical of the kind of questions that are challenging now,” Bocquet says, but could ultimately allow the development of nanoelectromechanical systems and devices. “You could think of devising a kind of nanosyringe,” for example, he says. “In some sense, the limit is just imagination.”

Erio Tosatti, a professor of physics at the International School for Advanced Studies in Trieste, Italy, who was not connected with this research, says this research “shows that structure and geometry is not all that matters to sliding dissipation; ionicity and electronic structure differences do as well.” He adds that this report “is likely to remain as a benchmark against which our future nanofriction theories will need to be tested.”

Besides Bocquet, the work was conducted by Alessandro Siria — who conceived of the apparatus used in the experiment — Antoine Nigues, Pascal Vincent, and Philippe Poncharal, all of the Université de Lyon. It was supported by the European Research Council.

How to grow wires and tiny plates