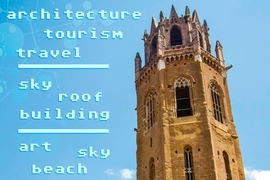 ↓ Download Image
Caption: Flickr users tagged a photograph similar to this one
“architecture," “tourism," and "travel.” A machine-learning system that
used a novel training strategy developed at MIT proposed “sky," “roof,”
and “building”; when it used a conventional training strategy, it came up
with “art," “sky,” and "beach.”
Credits: MIT News 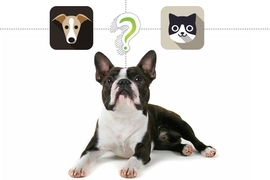 Caption:
Flickr users tagged a photograph similar to this one
“architecture," “tourism," and "travel.” A machine-learning system that
used a novel training strategy developed at MIT proposed “sky," “roof,”
and “building”; when it used a conventional training strategy, it came up
with “art," “sky,” and "beach.”
Credits:
Image: MIT News

At the Annual Conference on Neural Information Processing Systems in December, MIT researchers will present a new way of doing machine learning that enables semantically related concepts to reinforce each other. So, for instance, an object-recognition algorithm would learn to weigh the co-occurrence of the classifications “dog” and “Chihuahua” more heavily than it would the co-occurrence of “dog” and “cat.”

In experiments, the researchers found that a machine-learning algorithm that used their training strategy did a better job of predicting the tags that human users applied to images on the Flickr website than it did when it used a conventional training strategy.

“When you have a lot of possible categories, the conventional way of dealing with it is that, when you want to learn a model for each one of those categories, you use only data associated with that category,” says Chiyuan Zhang, an MIT graduate student in electrical engineering and computer science and one of the new paper’s lead authors. “It’s treating all other categories equally unfavorably. Because there are actually semantic similarities between those categories, we develop a way of making use of that semantic similarity to sort of borrow data from close categories to train the model.”

Zhang is joined on the paper by his thesis advisor, Tomaso Poggio, the Eugene McDermott Professor in the Brain Sciences and Human Behavior, and by his fellow first author Charlie Frogner, also a graduate student in Poggio’s group. Hossein Mobahi, a postdoc in the Computer Science and Artificial Intelligence Laboratory, and Mauricio Araya-Polo, a researcher with Shell Oil, round out the paper’s co-authors.

To quantify the notion of semantic similarity, the researchers wrote an algorithm that combed through Flickr images identifying tags that tended to co-occur — for instance, “sunshine,” “water,” and “reflection.” The semantic similarity of two words was a function of how frequently they co-occurred.

Ordinarily, a machine-learning algorithm being trained to predict Flickr tags would try to identify visual features that consistently corresponded to particular tags. During training, it would be credited with every tag it got right but penalized for failed predictions.

The MIT researchers’ system essentially gives the algorithm partial credit for incorrect tags that are semantically related to the correct tags. Say, for instance, that a waterscape was tagged, among other things, “water,” “boat,” and “sunshine.” With conventional machine learning, a system that tagged that image “water,” “boat,” “summer” would get no more credit than one that tagged it “water,” “boat,” “rhinoceros.” With the researchers’ system, it would, and the credit would be a function of the likelihood that the tags “summer” and “sunshine” co-occur in the Flickr database.

The problem is that assigning partial credit involves much more complicated calculations than simply scoring predictions as true or false. How, for instance, does a system that gets none of the tags completely right — say, “lake,” “sail,” and “summer” — compare to one that makes only one enormous error — say, “water,” “boat,” and “rhinoceros”?

That may sound circular: A system that factors in semantic similarity is better at predicting semantic similarity. But when a Web user is trying to find images online, a general thematic correspondence may well be more important than a precise intersection of keywords.

Moreover, the tags that users assign to any given Flickr image can be a motley assortment. Automatically generated tags clustered according to semantic similarity could be more useful than those applied by humans. One image in the researchers’ test set, for instance, depicted a uniformed mountain biker wearing a crash helmet biking down a hilly trail. The actual tags were “spring,” “race,” and “training.” But the trees in the image are bare, the grass is brown, and the tags “race” and “training” can’t both be right. The researchers’ system came up with “road,” “bike,” and “trail”; the conventional machine-learning algorithm produced “dog,” “surf,” and “bike.”

Finally, if some other measure of the notion of semantic similarity proved better able to capture human intuition than co-occurrence of Flickr tags, then the MIT researchers’ system could simply adopt it instead. Indeed, a longstanding and ongoing project in artificial-intelligence research is the assembly of “ontologies” that relate classification terms hierarchically — dogs are animals, collies are dogs, Lassie was a collie. In future work, the researchers hope to test their system using ontologies standard in machine-vision research.

“I think this work is very innovative because it uses the Wasserstein distance directly as a way to design learning machines,” says Cuturi, who was not involved in the current work. “From a technical point of view, the authors had to deal with the problem of comparing unnormalized histograms” — rather than probability distributions, which is what the Wasserstein distance was designed for. “They proposed a very elegant solution that is well motivated and computationally very efficient.”