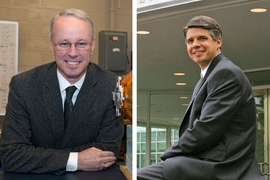 MIT Institute Professor Sheila Widnall, who is a former AIAA president, said, “Election as an AIAA Fellow is among the highest honors bestowed by the aerospace community. This represents an acknowledgement by Dave and Eric’s peers that their contributions to the field, both nationally and internationally, has been exceptional.”

Miller stepped down from his position as director of MIT's Space Systems Laboratory to accept the NASA appointment. But he remains an active MIT faculty member in the Department of Aeronautics and Astronautics (AeroAstro). His work has focused on developing special spacecraft that can repair and upgrade other spacecraft and satellites in space. He participated in developing electromagnetic formation flight, which uses electromagnets and reaction wheels to control the positions and attitudes of multiple spacecraft in proximity to each other.

Miller has also led AeroAstro’s capstone class, where seniors apply their conceiving, designing, implementing, and operating skills to projects. Capstone class students under his supervision, for instance, conceived the SPHERES microsatellites, an important research tool aboard the International Space Station.

Miller’s honors and awards include the NASA Group Achievement Award, a NASA Office of Aeronautics and Space Technology Commendation for Technology Excellence, and a Commander’s Public Service Award for his role on the U.S. Air Force Scientific Advisory Board.

Evans — who holds a bachelor's, a master's, and a PhD in electrical engineering from Ohio State University — is responsible for the laboratory's strategic direction and overall technical and administrative operations.

From 1999 to 2006, he headed Lincoln Laboratory's Air and Missile Defense Technology Division, directing programs associated with air and missile defense architectures, sensor technology, automatic target recognition, and open systems architectures. Prior to 1999, he was the leader of the laboratory's Air Defense Techniques Group, where he oversaw efforts in radar modernization, overland cruise missile defense, and ship self-defense.

Currently, Evans is vice chair of the Defense Science Board (DSB), where he has co-led task forces on improvised explosive devices and on cyber security and reliability in a digital cloud. The DSB is composed of leading U.S. scientists and engineers, who advise the Department of Defense on science and technology issues.

Evans has been an advisor to the U.S. Strategic Command Senior Advisory Group, a member of the Massport Security Advisory Council, and president of the National Consortium for Graduate Degrees for Minorities in Engineering and Science executive committee. A Fellow for the Institute of Electrical and Electronics Engineers (IEEE), Evans has also received the IEEE's Aerospace and Electronics Systems Society M. Barry Carlton Award for his paper on advanced radar signal processing.

Eric Evans appointed as vice chair of the Defense Science Board

Where to grab space debris