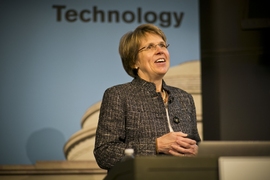 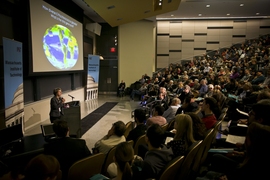 The marine organism that Sallie “Penny” Chisholm, the Lee and Geraldine Martin Professor in Environmental Studies at MIT, discovered back in 1988 is so vanishingly small that nobody had ever noticed it before. But this very tiny organism, which Chisholm named Prochlorococcus, turns out to have a huge impact, despite its diminutive size — just one micron, or a millionth of a meter, across. In fact, it is responsible for producing a significant fraction of the oxygen in Earth’s atmosphere.

Studying this remarkably abundant and diverse organism has turned out to be the core of Chisholm’s career, and has earned her honors including the National Medal of Science and the James R. Killian Jr. Faculty Achievement Award, MIT’s highest faculty honor. On Tuesday, Chisholm presented the annual Killian Faculty Achievement Award Lecture, in which she described the long road to discovery of the abundance, impact, and diversity of Prochlorococcus.

“Our view of life on Earth is skewed,” Chisholm said. “Photosynthesis is the foundation of all life on Earth” — yet even well-educated people often don’t quite understand how it works.

Chisholm illustrated that point with a survey question that few people manage to answer correctly: In comparing a seed with a tree grown from that seed, where does all the added mass come from? Most people think it has to do with soil or water, Chisholm said, but the real answer, she pointed out, is “out of thin air”: Carbon dioxide, split up by photosynthesis and recombined into organic compounds, produces most of the biomass.

While scientists knew, before Chisholm’s 1988 discovery, that the oceans accounted for about half of the planet’s photosynthesis, nobody knew which organisms were actually responsible for that output. (The biomass generated annually by Prochlorococcus, Chisholm pointed out, is equivalent to the weight of 5 billion Volkswagens.)

Prochlorococcus, Chisholm said, “looks like specks of dust” under a microscope, but it produces a red fluorescent emission — a known indicator of chlorophyll, the key chemical enabler of photosynthesis. It was that telltale red glow that led to the discovery of this organism, which turned out to be a form of bacterium.

But it took years of follow-up investigations, including sampling in ocean locations around the world, to reveal the true abundance of this creature, Chisholm said. It is now estimated that Earth’s oceans harbor 3 billion billion billion Prochlorococcus. “It’s by far the most abundant photosynthetic cell on the planet,” she said.

Over the years, Chisholm and her students have studied in detail the genomes of these organisms, finding them to be incredibly diverse, with variations depending on both their geographic location and the depth at which they live. Prochlorococcus come in two broad categories: low-light adapted, which live in deep water, and high-light adapted, which thrive in shallow water with plenty of light.

After analyzing the genetic makeup of these species, which contain only about 2,300 genes, Chisholm concluded: “It’s absolutely the minimal life form. It’s the smallest amount [of genetic coding] that can convert inorganic compounds into organic ones.”

But for a tiny and simple creature, Prochlorococcus is remarkably diverse, she said. Of those 2,300 genes, only about 1,200 are common to all varieties of the organism. A vast number of other genes — perhaps as many as 80,000 — can occur in some varieties, but not others. (By comparison, humans have a total of about 20,000 genes).

Though phytoplankton are tiny, their impact is huge. Their photosynthesis, which converts carbon dioxide into organic compounds — some of which sink to the seafloor — constitutes a "biological pump" that serves to sequester a large reservoir of carbon dioxide in the deep ocean. If phytoplankton didn't exist, the carbon dioxide in Earth’s atmosphere — the main agent of global warming — would be double or even triple what it actually is.

These tiny creatures, Chisholm said, have turned out to be “the gift that keeps on giving,” yielding ever-new insights — and new questions — that have driven her life’s research. Ongoing research with Prochlorococcus, she said, holds the prospect of uncovering entirely new kinds of antibiotics, or perhaps even a new way of producing biofuels.

“To understand life, you have to study it at different scales. Each part has emergent properties that feed back into the system,” Chisholm said. “The complexity of this system is incredibly humbling.”