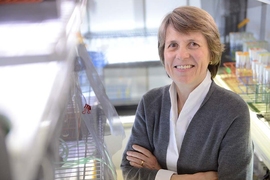 Sallie “Penny” Chisholm thought she was just going to a regular faculty meeting on Wednesday afternoon, but there was a surprise in store for the much-lauded scientist: At the meeting, she was named as the 2014 recipient of MIT’s highest honor for full-time faculty members, the James R. Killian Jr. Faculty Achievement Award, in recognition of her “extraordinary professional accomplishments.”

When the award was announced, Chisholm said, “I’m completely stunned. … I’m really honored, and this means a tremendous amount to me.”

Chisholm had planned to be on Lake Superior yesterday, but Markus Buehler, head of the Department of Civil and Environmental Engineering (CEE), urged her to attend the monthly faculty meeting. “I had no idea until we walked through the door,” she said.

Chisholm, the Lee and Geraldine Martin Professor of Environmental Studies in CEE, who holds a joint appointment in the Department of Biology, has been widely recognized for her groundbreaking work on photosynthetic organisms in the ocean. Last year, she received the National Medal for Science, the country’s highest award for scientific research, which was presented to her at the White House by President Barack Obama.

Back in 1988, Chisholm led a team that discovered that more than half of the oxygen in Earth’s atmosphere originated with a humble microorganism called Prochlorococcus. This marine bacterium, Chisholm and her co-workers found, turns out to be one of this planet’s most abundant photosynthetic creatures.

As stated in the Killian Award’s citation, “This discovery — a microorganism with global impact — is symbolic of Professor Chisholm’s career. As one faculty colleague has observed, ‘Her work is a defining example of the value of thinking both big and small to make sense of the complex interplay of life and the environment.’”

Chisholm has also been a leader in connecting laboratory research with the outside world, as exemplified by the three children’s books she has authored to help explain ecological principles and basic processes such as photosynthesis.

Chisholm received her undergraduate degree from Skidmore College and her doctorate in biology from the State University of New York at Albany. She has been on the MIT faculty, in what is now CEE, since 1976. She has held a joint appointment in biology since 1993, and has taught 7.014 (Introductory Biology) for more than two decades.

In addition to her teaching and research, Chisholm served as associate chair of the faculty from 1987 to 1989, and was the founding director of MIT’s Earth System Initiative.

“If you had told me in 1976, when I walked into my office here, that I would be getting an award like this,” she said, “I would have thought you were absolutely nuts.” As a biologist joining an engineering department, she said, “I came to MIT sort of on a lark. I didn’t think that I would ever get tenure.” But her colleagues at Scripps Oceanographic Institution, where she was working at the time, told her, “You don’t turn down MIT.”

The James R. Killian Jr. Faculty Achievement Award was established in 1971 “to recognize extraordinary professional accomplishments by full-time members of the MIT faculty.” It is the greatest honor the faculty can bestow upon one of its members. A faculty committee chooses the recipient from among candidates nominated by their peers for outstanding contributions to their fields, to MIT, and to society.

Science reporter Elizabeth Pennisi spotlights Institute Professor Sallie “Penny” Chisholm’s pioneering research into uncovering the secrets of Prochlorococcus. Prof. Michael Follows says that Chisholm, "has beautifully shown us how this microbe works and how the ocean world is organized."