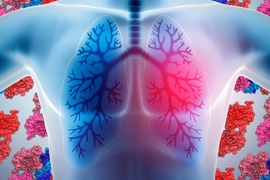 ↓ Download Image
Caption: P53, which helps healthy cells prevent genetic mutations, is missing from about half of all tumors. Researchers have found that a backup system takes over when p53 is disabled and encourages cancer cells to continue dividing. In the background of this illustration are crystal structures of p53 DNA-binding domains.

Caption:
P53, which helps healthy cells prevent genetic mutations, is missing from about half of all tumors. Researchers have found that a backup system takes over when p53 is disabled and encourages cancer cells to continue dividing. In the background of this illustration are crystal structures of p53 DNA-binding domains.
Credits:
Image: Jose-Luis Olivares/MIT (p53 illustration by Richard Wheeler/Wikimedia Commons)

About half of all tumors are missing a gene called p53, which helps healthy cells prevent genetic mutations. Many of these tumors develop resistance to chemotherapy drugs that kill cells by damaging their DNA.

MIT cancer biologists have now discovered how this happens: A backup system that takes over when p53 is disabled encourages cancer cells to continue dividing even when they have suffered extensive DNA damage. The researchers also discovered that an RNA-binding protein called hnRNPA0 is a key player in this pathway.

“I would argue that this particular RNA-binding protein is really what makes tumor cells resistant to being killed by chemotherapy when p53 is not around,” says Michael Yaffe, the David H. Koch Professor in Science, a member of the Koch Institute for Integrative Cancer Research, and the senior author of the study, which appears in the Oct. 22 issue of Cancer Cell.

The findings suggest that shutting off this backup system could make p53-deficient tumors much more susceptible to chemotherapy. It may also be possible to predict which patients are most likely to benefit from chemotherapy and which will not, by measuring how active this system is in patients’ tumors.

In healthy cells, p53 oversees the cell division process, halting division if necessary to repair damaged DNA. If the damage is too great, p53 induces the cell to undergo programmed cell death.

In many cancer cells, if p53 is lost, cells undergo a rewiring process in which a backup system, known as the MK2 pathway, takes over part of p53’s function. The MK2 pathway allows cells to repair DNA damage and continue dividing, but does not force cells to undergo cell suicide if the damage is too great. This allows cancer cells to continue growing unchecked after chemotherapy treatment.

“It only rescues the bad parts of p53’s function, but it doesn’t rescue the part of p53’s function that you would want, which is killing the tumor cells,” says Yaffe, who first discovered this backup system in 2013.

In the new study, the researchers delved further into the pathway and found that the MK2 protein exerts control by activating the hnRNPA0 RNA-binding protein.

RNA-binding proteins are proteins that bind to RNA and help control many aspects of gene expression. For example, some RNA-binding proteins bind to messenger RNA (mRNA), which carries genetic information copied from DNA. This binding stabilizes the mRNA and helps it stick around longer so the protein it codes for will be produced in larger quantities.

“RNA-binding proteins, as a class, are becoming more appreciated as something that’s important for response to cancer therapy. But the mechanistic details of how those function at the molecular level are not known at all, apart from this one,” says Ian Cannell, a research scientist at the Koch Institute and the lead author of the Cancer Cell paper.

In this paper, Cannell found that hnRNPA0 takes charge at two different checkpoints in the cell division process. In healthy cells, these checkpoints allow the cell to pause to repair genetic abnormalities that may have been introduced during the copying of chromosomes.

The researchers also found that measuring the levels of mRNA for Gadd45 and p27 could help predict patients’ response to chemotherapy. In a clinical trial of patients with stage 2 lung tumors, they found that patients who responded best had low levels of both of those mRNAs. Those with high levels did not benefit from chemotherapy.

“You could measure the RNAs that this pathway controls, in patient samples, and use that as a surrogate for the presence or absence of this pathway,” Yaffe says. “In this trial, it was very good at predicting which patients responded to chemotherapy and which patients didn’t.”

“The most exciting thing about this study is that it not only fills in gaps in our understanding of how p53-deficient lung cancer cells become resistant to chemotherapy, it also identifies actionable events to target and could help us to identify which patients will respond best to cisplatin, which is a very toxic and harsh drug,” says Daniel Durocher, a senior investigator at the Samuel Lunenfeld Research Institute of Mount Sinai Hospital in Toronto, who was not part of the research team.

The MK2 pathway could also be a good target for new drugs that could make tumors more susceptible to DNA-damaging chemotherapy drugs. Yaffe’s lab is now testing potential drugs in mice, including nanoparticle-based sponges that would soak up all of the RNA binding protein so it could no longer promote cell survival.

This work was supported in part by the Charles and Marjorie Holloway Foundation.