Studying conflict from the ground up 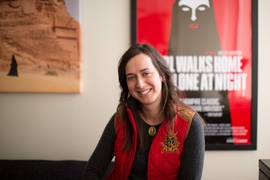 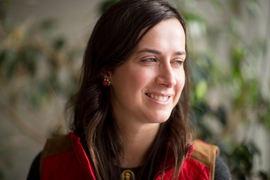 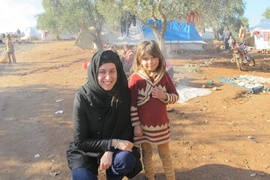 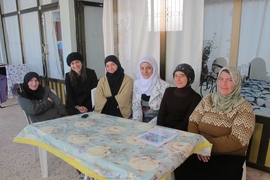 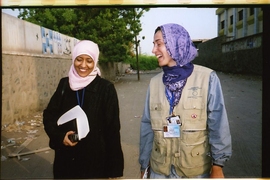 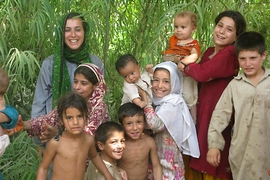 ↓ Download Image
Caption: Christia stands with children from a village in Nangarhar, Afghanistan, in the summer of 2009.
Credits: Courtesy of Fotini Christia

If Fotini Christia heeded those warnings, she would barely get any work done: Christia, an associate professor of political science at MIT, specializes in the dynamics of civil wars, local politics, and the postwar reconstruction of states, which she has studied from Afghanistan to Yemen.

Starting with careful on-the-ground research, Christia weaves local insights with quantitative studies and field experiments to examine political dynamics throughout the Muslim and Arab worlds. A central finding of her work is that politics in these places is not eternally divided along ethnic or religious lines; instead, political divisions and coalitions form for more pragmatic reasons, often reflecting shifts in the balance of power.

That conclusion, detailed in Christia’s book, “Alliance Formation in Civil Wars” (Cambridge University Press, 2012), has policy implications for the U.S. and other countries, since it suggests that building stable polities is more possible than it might be if states were perpetually divided along sectarian lines.

That is not the sole focus of Christia’s body of work, however. In Bosnia, she has found that integrating schools across ethnic and religious lines leads to greater civic collaboration. In Afghanistan, a massive field experiment conducted in 500 villages showed that government programs can effectively get more women to participate in politics. In Yemen, she is part of a group studying the connections between social networks and political activity.

“You have to understand how the dynamics work at the micro level to theorize the broader picture,” Christia says.

She shrugs off the risks of her research in unstable places — “I guess I just have a high threshold of fear,” she says — and adds that she has often done research in countries that are sometimes punctuated by violence, but not full of risk.

“I think there are meaningful ways to study conflict without endangering lives,” Christia says. Admittedly, she also has an advantage of sorts when it comes to visiting geopolitical hot spots: She’s Greek, which helps in avoiding some of the suspicion that might be attached to U.S. citizens in, say, Afghanistan.

“Greekness is useful,” Christia says. The only time it was a problem for her, she notes wryly, was during two summers of language study in Iran, where people “would get upset over Alexander the Great burning down Persepolis,” the ancient Persian city destroyed by the Greeks around 330 B.C.

Christia visits Syrian internally-displaced children in a camp in December 2012.

Christia interviews Syrian women of the opposition in the Syrian-Turkish border in December 2012.
Courtesy of Fotini Christia

Christia works on an electoral observation mission in Aden, Yemen, in September 2006.
Courtesy of Fotini Christia

Christia stands with children from a village in Nangarhar, Afghanistan, in the summer of 2009.
Courtesy of Fotini Christia

Christia grew up in Salonika, the port city in the north of Greece that has been a crossroads of the region for millennia and is layered with the history of ancient Greece, Byzantium, and the Ottoman Empire.

She studied at a high school that regularly sends students to the U.S. for college. Christia did well enough to become one of those students, getting her BA from Columbia University, where she also finished a five-year, joint-degree course of study that granted her an MA from Columbia’s School of International and Public Affairs.

The wars in Bosnia and Kosovo in the 1990s, not all that far from Salonika, influenced her interest in political conflict. But her ability to tolerate fieldwork, Christia says, comes in part from her Greek upbringing: During some summers, she would stay in a rural village in the Peloponnese with her paternal grandmother, for whom she is named, in the Greek tradition. (“Fotini” means “full of light.”) Running water and electricity came late to the village, so her grandmother washed her grandchildren outside in a tub of water, and let them play freely in the fields.

“It was a very traditional place where we would be allowed to do things that, in retrospect, I can’t even believe we survived,” Christia says. “My brother was 6 and I was 4, and we’d be riding a donkey without a saddle. My dad argues it was survival of the fittest. I feel it was good training for my Afghan days, because it made it more tolerable having no running water, no electricity, being in a hut in the middle of nowhere.”

Her grandmother was illiterate; Christia has an identification document she signed with a cross. Christia’s father, now an agricultural economist in Salonika, was the first on that side of her family to attend college. Indeed, he has provided informal insights into his daughter’s work, such as one time when Christia and her colleagues conducted a field experiment about wheat distribution in Afghanistan.

“It was fascinating how a lot of what he predicted would play out was what we saw, from knowing the dynamics of the rural village,” Christia says.

Christia has also received valuable formal mentorship in her career. After Columbia, she received her PhD in public policy from Harvard University, where her advisors included Robert Bates, Stephen Walt, and Michael Ignatieff. One of her graduate-school advisors was MIT’s Roger Petersen, a political scientist who had studied the Balkan conflicts at a granular level.

“His work was immensely influential in the sense that he was looking at micro-level dynamics and conflict way before anyone else was,” Christia says.

That approach remains central to her work, although at the moment, she is attempting a “big data” study of network communications in Yemen. She and several colleagues are looking at patterns of phone activity in the country, in relation to both internal political activities and U.S.-led drone strikes.

“We’re going to try to see if there is variation in how people communicate based on whether it was a violent or nonviolent event,” Christia says. To really make sense of the data, she acknowledges, it is vital to understand local customs and activities — to grasp how phone use changes in relation to holidays, work schedules, and even the traditional Yemeni practice of chewing qat, a plant (and stimulant), for hours in the afternoon.

“You can’t really make arguments about the causal mechanisms without collecting qualitative information about what’s going on locally,” Christia says. “You have to know the stories. This is the thing that keeps it real, and is the most effective way to make sure it’s relevant research.”

3 Questions: Violence and protests in the Muslim world

3 Questions: Fotini Christia on the war in Afghanistan