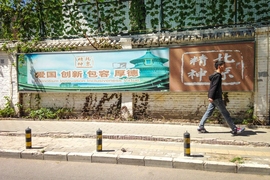 ↓ Download Image
Caption: A man walks past a political banner in Guanghua Li that reads, "Patriotism Innovation Inclusiveness Virtue," in Chinese and English.

When citizens stop complying with laws, the legitimacy of government comes into question, especially in nondemocratic states — or so goes a prominent strand of political thinking. But what if citizens are doing something subtler, such as disobeying in order to enact smaller, more incremental changes?

That’s the implication of a new study of political attitudes among people in rural China, an area where political scientists would not normally expect to see give-and-take between residents and the government.

The study, conducted by Lily Tsai, an associate professor of political science at MIT, suggests that citizens who do not follow all the laws are engaging in “constructive noncompliance” — acts that are intended to prompt the government to alter its policies, without necessarily challenging its overall status.

Roughly two-thirds of citizens surveyed think local officials take their views into account when making decisions, while only 15 percent say they would “always follow” a local policy decision they believed was not right.

“If we’re interested in questions like how stable is [a nondemocratic] regime, it seems important to understand how ordinary people on the ground see it in their own lives, from their own point of view,” Tsai says.

Her research, based on both in-depth interviews and a survey of residents, found that noncompliant citizens often take the regime’s legitimacy for granted, and think their own subversions of the law — often based around issues concerning property — will eventually effect change.

“They had this belief that if [officials] did see there was sufficient noncompliance, [the officials] would conclude that the citizens were trying to tell them something,” Tsai says. That was not the kind of interaction Tsai thought she would find when studying political attitudes in rural China, but the presence of this attitude became too evident to ignore, she says.

“It wasn’t a phenomenon I was anticipating,” Tsai notes.

The results of Tsai’s study are detailed in a new paper, “Constructive Noncompliance,” published in the latest issue of the journal Comparative Politics. She conducted multiple in-depth interviews with Chinese citizens, in addition to running a survey of 2,000 people, randomly selected from 25 counties in five provinces. The survey was conducted in conjunction with the Chinese Academy of Sciences.

The interviews added qualitative depth to the survey results, bringing nuance to survey questions about the willingness of citizens to comply with regulations and express disagreements with the government over matters such as land use, taxation, and more.

As one respondent told Tsai, “The government probably makes unreasonable policies because it doesn’t have a complete understanding of actual conditions.”

In turn, Tsai says, “The kinds of people who engage in noncompliance are the same people who believe the government responds to their feedback. [Citizens] do have to believe there are people who are trying to make good policies.”

At the same time, Tsai’s research did suggest that some citizens who follow rules they disagree with “perceived the policy process as unresponsive to citizen input.”

Overall, the survey results show a greater willingness to disobey laws in situations where some sort of back-and-forth is more likely: About 71 percent of respondents said they would “definitely” not follow a local policy they found lacking, while only 28 percent would do the same regarding a central government policy.

As Tsai acknowledges, her findings cut in two directions for democracy advocates: The research indicates that there are more opportunities for voice in the policy process among individuals in nondemocracies, but also suggests a tolerance for nondemocratic forms of government that might disappoint rights advocates.

Still, she adds, the purpose of the project was primarily empirical, aimed at uncovering the nature of the relationship between citizens and government in cases where experts might previously have assumed there was little room for maneuver among citizens at all.

“I’m interested in how people themselves see things,” Tsai says. “That’s the real motivation for this kind of research.”