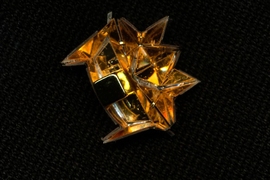 At the recent International Conference on Robotics and Automation, MIT researchers presented a printable origami robot that folds itself up from a flat sheet of plastic when heated and measures about a centimeter from front to back.

Weighing only a third of a gram, the robot can swim, climb an incline, traverse rough terrain, and carry a load twice its weight. Other than the self-folding plastic sheet, the robot’s only component is a permanent magnet affixed to its back. Its motions are controlled by external magnetic fields.

“The entire walking motion is embedded into the mechanics of the robot body,” says Cynthia R. Sung, an MIT graduate student in electrical engineering and computer science and one of the robot’s co-developers. “In previous [origami] robots, they had to design electronics and motors to actuate the body itself.”

Joining Sung on the paper describing the robot are her advisor, Daniela Rus, the Andrew and Erna Viterbi Professor in MIT’s Department of Electrical Engineering and Computer Science; first author Shuhei Miyashita, a postdoc in Rus’ lab; Steven Guitron, who just received his bachelor’s degree in mechanical engineering from MIT; and Marvin Ludersdorfer of the Technical University of Munich.

Watch the MIT researchers' origami robot fold itself up and complete tasks.

The robot’s design was motivated by a hypothetical application in which tiny sheets of material would be injected into the human body, navigate to an intervention site, fold themselves up, and, when they had finished their assigned tasks, dissolve. To that end, the researchers built their prototypes from liquid-soluble materials. One prototype robot dissolved almost entirely in acetone (the permanent magnet remained); another had components that were soluble in water.

“We complete the cycle from birth through life, activity, and the end of life,” Miyashita says. “The circle is closed.”

In all of the researchers’ prototypes, the self-folding sheets had three layers. The middle layer always consisted of polyvinyl chloride, a plastic commonly used in plumbing pipes, which contracts when heated. In the acetone-soluble prototype, the outer layers were polystyrene.

Slits cut into the outer layers by a laser cutter guide the folding process. If two slits on opposite sides of the sheet are of different widths, then when the middle layer contracts, it forces the narrower slit’s edges together, and the sheet bends in the opposite direction. In their experiments, the researchers found that the sheet would begin folding at about 150 degrees Fahrenheit.

In their experiments, the researchers positioned the robot on a rectangular stage with an electromagnet at each of its four corners. They were able to vary the strength of the electromagnets’ fields rapidly enough that the robot could move nearly four body lengths a second.

In addition to the liquid-soluble versions of their robot, the researchers also built a prototype whose outer layers were electrically conductive. Inspired by earlier work from Rus and Miyashita, the researchers envision that a tiny, conductive robot could act as a sensor. Contact with other objects — whether chemical accretions in a mechanical system or microorganisms or cells in the body — would disrupt a current passing through the robot in a characteristic way, and that electrical signal could be relayed to human operators.

“Making small robots is particularly challenging, because you don’t just take off-the-shelf components and bolt them together,” says Hod Lipson, a professor of mechanical and aerospace engineering at Cornell University, who studies robotics. “It’s a challenging angle of robotics, and they’ve been able to solve it.”

“They use digital manufacturing techniques so that the intelligence of the manufacturing is embedded in the material,” Lipson adds. “I think the techniques they describe would scale to smaller and smaller dimensions, so they by no means have reached a limit.”

Pheobe Gavin reports for Slate on self-assembling origami robots developed by Professor Daniela Rus’ team that could one day be refined for use in surgery or other medical applications: “The origami robot can walk, swim, push objects, climb inclines, and carry objects twice its weight.”

In this video, CNN examines a new printable origami robot developed by MIT researchers that can dissolve in a variety of liquids. CNN explains that the researchers hope that the robot could one day be used to perform medical tasks inside the human body.

New Scientist reporter Rowan Hooper writes about how MIT researchers have developed a 1.7-centimeter long origami robot that can self-fold, walk and swim. Hooper explains that, “using liquid-soluble materials, different versions of the robot can dissolve in either water or acetone, leaving only the permanent magnet behind.”

BetaBoston reporter Nidhi Subbaraman writes that MIT researchers have developed a small self-folding robot that they hope will one day lead to bio-compatible robots that “could enter the body, perform surgery guided from afar, and dissolve away as harmlessly as surgical stitches.”

MIT researchers have created a tiny, self-assembling, origami robot that they hope could one day be small enough to enter the human body and perform medical tasks, reports Lauren Walker for Newsweek.  “Driven by magnetic fields, the robot can travel on both land and water at the speed of three or four centimeters per second," Walker explains.

Lauren O’Neil of CBC News reports on a new self-folding origami robot created by researchers at MIT’s Computer Science and Artificial Intelligence Laboratory (CSAIL). The robot “could eventually become small enough to fold into the human body, perform medical tasks, and then dissolve itself when finished — all by itself,” O’Neil reports.