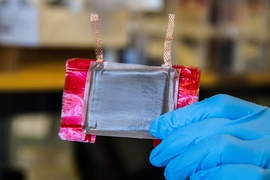 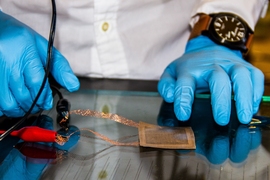 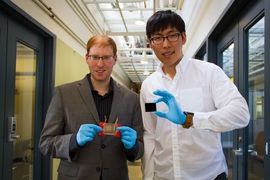 Composite materials used in aircraft wings and fuselages are typically manufactured in large, industrial-sized ovens: Multiple polymer layers are blasted with temperatures up to 750 degrees Fahrenheit, and solidified to form a solid, resilient material. Using this approach, considerable energy is required first to heat the oven, then the gas around it, and finally the actual composite.

Aerospace engineers at MIT have now developed a carbon nanotube (CNT) film that can heat and solidify a composite without the need for massive ovens. When connected to an electrical power source, and wrapped over a multilayer polymer composite, the heated film stimulates the polymer to solidify.

The group tested the film on a common carbon-fiber material used in aircraft components, and found that the film created a composite as strong as that manufactured in conventional ovens — while using only 1 percent of the energy.

The new “out-of-oven” approach may offer a more direct, energy-saving method for manufacturing virtually any industrial composite, says Brian L. Wardle, an associate professor of aeronautics and astronautics at MIT.

“Typically, if you’re going to cook a fuselage for an Airbus A350 or Boeing 787, you’ve got about a four-story oven that’s tens of millions of dollars in infrastructure that you don’t need,” Wardle says. “Our technique puts the heat where it is needed, in direct contact with the part being assembled. Think of it as a self-heating pizza. … Instead of an oven, you just plug the pizza into the wall and it cooks itself.”

Wardle says the carbon nanotube film is also incredibly lightweight: After it has fused the underlying polymer layers, the film itself — a fraction of a human hair’s diameter — meshes with the composite, adding negligible weight.

The team, including MIT graduate students Jeonyoon Lee and Itai Stein and Seth Kessler of the Metis Design Corporation, has published its results in the journal ACS Applied Materials and Interfaces.

Wardle and his colleagues have experimented with CNT films in recent years, mainly for deicing airplane wings. The team recognized that in addition to their negligible weight, carbon nanotubes heat efficiently when exposed to an electric current.

In experiments, Wardle and his team integrated the film into airplane wings via conventional, oven-based curing methods, showing that when voltage was applied, the film generated heat, preventing ice from forming.

The deicing tests inspired a question: If the CNT film could generate heat, why not use it to make the composite itself?

How hot can you go?

In initial experiments, the researchers investigated the film’s potential to fuse two types of aerospace-grade composite typically used in aircraft wings and fuselages. Normally the material, composed of about 16 layers, is solidified, or cross-linked, in a high-temperature industrial oven.

The researchers manufactured a CNT film about the size of a Post-It note, and placed the film over a square of Cycom 5320-1. They connected electrodes to the film, then applied a current to heat both the film and the underlying polymer in the Cycom composite layers.

The team measured the energy required to solidify, or cross-link, the polymer and carbon fiber layers, finding that the CNT film used one-hundredth the electricity required for traditional oven-based methods to cure the composite. Both methods generated composites with similar properties, such as cross-linking density.

Wardle says the results pushed the group to test the CNT film further: As different composites require different temperatures in order to fuse, the researchers looked to see whether the CNT film could, quite literally, take the heat.

“At some point, heaters fry out,” Wardle says. “They oxidize, or have different ways in which they fail. What we wanted to see was how hot could this material go.”

To do this, the group tested the film’s ability to generate higher and higher temperatures, and found it topped out at over 1,000 F. In comparison, some of the highest-temperature aerospace polymers require temperatures up to 750 F in order to solidify.

“We can process at those temperatures, which means there’s no composite we can’t process,” Wardle says. “This really opens up all polymeric materials to this technology.”

The team is working with industrial partners to find ways to scale up the technology to manufacture composites large enough to make airplane fuselages and wings.

“There needs to be some thought given to electroding, and how you’re going to actually make the electrical contact efficiently over very large areas,” Wardle says. “You’d need much less power than you are currently putting into your oven. I don’t think it’s a challenge, but it has to be done.”

Gregory Odegard, a professor of computational mechanics at Michigan Technological University, says the group's carbon nanotube film may go toward improving the quality and efficiency of fabrication processes for large composites, such as wings on commercial aircraft. The new technique may also open the door to smaller firms that lack access to large industrial ovens.

"Smaller companies that want to fabricate composite parts may be able to do so without investing in large ovens or outsourcing," says Odegard, who was not involved in the research. "This could lead to more innovation in the composites sector, and perhaps improvements in the performance and usage of composite materials."