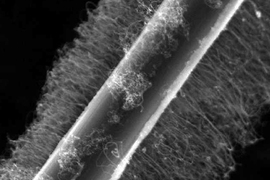 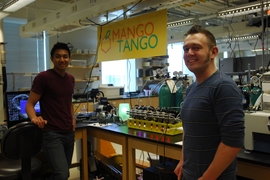 These days, aerospace engineering is all about the light stuff: building airplanes with lighter wings, fuselage and landing gear in an effort to reduce fuel costs.

Advanced carbon-fiber composites have been used in recent years to lighten planes’ loads. These materials can match aluminum and titanium in strength but at a fraction of the weight, and can be found in aircraft like the Boeing 787 and Airbus A380, reducing such jets’ weight by 20 percent.

For the next generation of commercial jets, researchers are looking to even stronger and lighter materials, such as composites made with carbon fibers coated with carbon nanotubes — tiny tubes of crystalline carbon. When arranged in certain configurations, nanotubes can be hundreds of times stronger than steel, but only one-sixth the weight, making such composites attractive for use in airplanes, as well as cars, trains, spacecraft and satellites.

But a significant hurdle to achieving such composites lies at the nanoscale: Scientists who have tried growing carbon nanotubes on carbon fibers have found that doing so significantly degrades the underlying fibers, stripping them of their inherent strength. 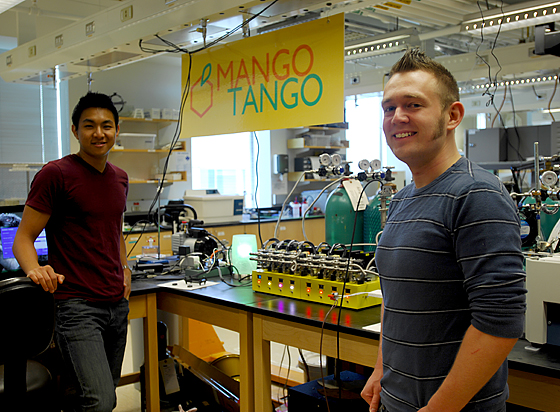 Now a team from MIT has identified the root cause of this fiber degradation, and devised techniques to preserve the fibers’ strength. Applying their discoveries, the researchers coated carbon fibers with nanotubes without causing fiber degradation, making the fibers twice as strong as previous nanotube-coated fibers — paving the way for carbon-fiber composites that are not only stronger, but also more electrically conductive. The researchers say the techniques can easily be integrated into current fiber-manufacturing processes.

A paper detailing the results by Wardle and his colleagues is published in the journal ACS Applied Materials and Interfaces. Co-authors are postdoc Stephen Steiner, who contributed to the research as a graduate student, and Richard Li, a graduate student who was an undergraduate in Wardle’s lab.

Getting to the nitty-gritty of fiber degradation

To understand how carbon fibers are manufactured, the group visited carbon-fiber production plants in Japan, Germany and Tennessee. One aspect of the fiber-manufacturing process stood out: During manufacturing, fibers are stretched to near their breaking point as they are heated to high temperatures. In contrast, researchers who have tried to grow nanotubes on carbon fibers in the lab typically do not use tension in their fabrication processes.

To replicate the manufacturing process they witnessed, Li and Steiner engineered a small-scale apparatus made of graphite. The researchers strung individual carbon fibers — each 10 times thinner than a human hair — across the device, much like the strings of a guitar, and hung tiny weights on either end of each fiber, pulling them taut. The group then grew carbon nanotubes on the fibers, first covering the fibers with a special set of coatings, and then heating the fibers in a furnace. They then used chemical vapor deposition to grow a fuzzy layer of nanotubes along each fiber.

To get nanotubes to grow, the fiber typically needs to be coated with a metal catalyst like iron, but researchers have hypothesized that such catalysts might also be the source of fiber degradation. In their experiments, however, Steiner and Li found that the catalyst only contributed to about 15 percent of the fiber’s degradation.

“When we got to the nitty-gritty of it, we found that the metal catalyst, the perceived culprit, turned out to be more of an accomplice,” Steiner says. “We could see it did a little damage, but it wasn’t the thing really killing everything.”

Instead, the group found, after further experiments, that the majority of fiber degradation was due to a previously unidentified mechanochemical phenomenon arising from a lack of tension when carbon fibers are heated above a certain temperature.

After identifying the causes of fiber degradation, the researchers came up with two practical strategies for growing nanotubes on carbon fiber that preserve fiber strength.

First, the team coated the carbon fiber with a layer of alumina ceramic to “disguise” it, enabling the iron catalyst to stick to the fiber without degrading it. The solution, however, came with another challenge: the layer of alumina kept flaking off.

To keep the alumina in place, the team developed a polymer coating called K-PSMA — which, as Steiner describes it, works like hair conditioner in reverse. Hair conditioners have two seemingly opposite chemical features: a water-absorbent component that allows the conditioner to stick to hair, and a waterproof component that keeps hair from getting frizzy. Likewise, K-PSMA has hydrophilic and hydrophobic components, but its waterproof feature sticks to the carbon fiber, while the water-absorbent component attracts the alumina and the metal catalyst.

In their experiments, the researchers found the coating allowed the alumina and metal catalyst to stick, without having to add other processes, like pre-etching the fiber surface. The team placed the coated fibers under tension, and successfully grew nanotubes without damaging the fiber.

For the group’s second strategy, Steiner observed that it may be possible to eliminate the need for tension by reducing the temperature of nanotube growth.  Using a recently discovered nanotube-growth process together with K-PSMA, the team demonstrated it is possible to grow nanotubes at a much lower temperature — nearly 300 degrees Celsius cooler than is typically used — avoiding damage to the underlying fiber,.

“This process reduces not only the amount of energy and volume of gas required, but the amount of extraneous substances you have to put on the fiber,” Steiner says. “It’s actually pretty simple and cost-effective.”

Milo Shaffer, a professor of materials chemistry at Imperial College, London, says the group’s carbon-fiber techniques may be useful in designing composites for use in electrodes and air filters. A next step toward this goal, he says, is to make sure the fiber’s various layers and coatings stay in place.

“This result indicates an important factor to be incorporated in future ‘hairy carbon fiber’ developments,” says Shaffer, who did not contribute to the research. “The effect of the various coating combinations on [nanotube] attachment, and the eventual — and critical — fiber-matrix adhesion in composites, remains to be explored.”

The researchers have filed a patent for the two strategies, and envision advanced fiber composites incorporating their techniques for a whole range of applications.

“There are not a lot of people innovating materials chemistry for advanced aerospace structural applications,” Steiner says. “I think this is particularly exciting, and has a very real possibility to make a large-scale impact on the environment, and on the performance of aerospace vehicles.”