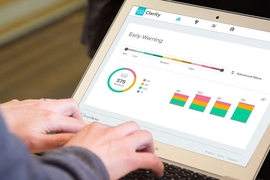 ↓ Download Image
Caption: An example of the Early Warning module, which identifies students at risk for dropping out, based on individual and school data. It shows that out of 375 students, 65 were at high risk (red), 88 were at moderate risk (yellow), and 203 were at low risk (green).
Credits: Courtesy of BrightBytes 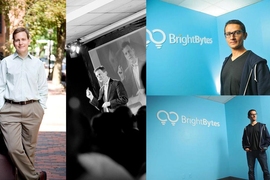 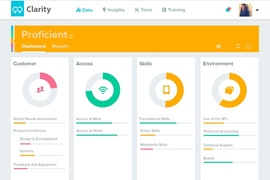 ↓ Download Image
Caption: A screenshot of the CASE module. The school is given a score of 1043 (bottom, right), marking it as "proficient" in implementing classroom technologies.
Credits: Courtesy of BrightBytes

Caption:
An example of the Early Warning module, which identifies students at risk for dropping out, based on individual and school data. It shows that out of 375 students, 65 were at high risk (red), 88 were at moderate risk (yellow), and 203 were at low risk (green).
Credits:
Courtesy of BrightBytes

Caption:
A screenshot of the CASE module. The school is given a score of 1043 (bottom, right), marking it as "proficient" in implementing classroom technologies.
Credits:
Courtesy of BrightBytes

To see the impact of their investments, companies often use business intelligence tools — primarily data-analytics ­software — that analyze company data to link cash spent with outcomes.

Now MIT spinout BrightBytes has developed similar data-analytics software for schools that links the implementation of classroom technologies, and other strategies, to student achievement. About one in seven U.S. schools now uses the software.

The software combines academic research with collected data on students, teachers, and schools to create school-by-school analyses and action plans for implementing technologies and strategies. This lets educators and administrators know where to direct their funding.

“It’s a business intelligence platform written for schools,” says BrightBytes CEO Rob Mancabelli MBA ’12, who worked in the education sector for 15 years before co-founding the startup. “Instead of a return-on-investment, though, it’s a ‘return-on-learning.’”

By giving educators these data-analytics tools, Mancabelli says, BrightBytes hopes to take the guessing game out of fund allocation. This is important, he says: The U.S. spends billions of dollars annually on classroom technologies — such as classroom tablets, interactive screens, and software — as well as targeted academic programs, yet it’s very difficult to measure whether any of these actually boost student success.

“We think the best way to improve student learning is to give decision-makers who control the time, budget, and resources the best information to make decisions,” Mancabelli says. “If, along the way, it helps to eliminate financial missteps, then that’s fantastic.”

Mancabelli launched BrightBytes with entrepreneur Hisham Anwar MBA ’12, now chief technology officer, after the two met in the executive MBA program (EMBA) at the MIT Sloan School of Management. Over the course of the 20-month program, they turned BrightBytes from an abstract concept into a commercial product with more than 1,000 users.

There are six modules on BrightByte’s platform, called Clarity, that tackle different issues within schools. CASE is the module used to measure technology in the classroom. The startup’s most recent module, Early Warning, released last September, identifies at-risk students based on individual and school-specific factors. Five additional modules are due out this year.

Clarity works through a combination of human expertise and computation. Behind the platform is a team of researchers and data scientists who pore over academic papers, reports, and case studies to identify what works and what doesn’t in the classroom — for instance, finding technologies that have led to better student performance, or solutions that best curb the dropout rate.

Then, the platform takes information from surveys and questionnaires at the participating school, along with data from third-party sources — such as socioeconomic status and student performance — to report the school’s proficiency in certain areas.

For example, a report from the CASE module will provide a numerical score for a school’s “proficiency” to implement classroom technologies based on factors such as student and teacher access to technology, overall online engagement among students, and professional development and support for teachers. Scores are given in five categories, ranging from 800 points or lower, to 1200.

If schools are deemed “proficient,” with a high number, they could be good to go. But if schools are lacking, the software suggests solutions. A certain school may want to use digital educational gaming, but it’ll first need to ensure that more students have access to mobile devices, and boost professional development for teachers, or the technology may have little to no impact on student success.

In its two years on the market, the software has shown some tangible results. In 2012, the Capital Area Independent Unit (CAIU) in Pennsylvania, which provides educational services to more than two dozen school districts, used CASE to gauge whether schools in its service area could successfully implement online and blended courses; results indicated significant gaps in technology access and professional development in some districts. Today, those districts have shown a 60 percent increase in student access to mobile devices, a 52 percent increase in teachers who post coursework online, and a 55 percent increase in online student collaboration.

The benefit of BrightBytes isn’t simply amassing data, but making sense of the data, Mancabelli says. With implementing classroom technologies, for example, administrators have had to spend a lot of time and money conducting their own research or hiring consultants.

“It’s rare anyone in schools, with as many things as they have on their plate, has time to do that,” Mancabelli says. “Instead, most use intuition to guess the problems and invest money and time into solutions and hope it turns out alright.”

This also happens when schools seek solutions for curbing the dropout rate, Mancabelli says. That’s why BrightBytes recently developed its Early Warning module, which has been adopted by the state of West Virginia. This module is powered by the same rigorous academic research as CASE, but instead analyzes 24 risk factors across schools — such as low attendance and grades, behavioral issues, and demographic factors — to flesh out the students in danger of dropping out.

The dashboard displays the total number of at-risk students, their likelihood to drop out, a list of the top at-risk students, and best practices to ensure that those students stay in school. It will also show which factors most likely lead to dropouts in the school’s district, so schools can choose which factors to focus on. “So you’re actually looking at research, and in the context of your own school,” Mancabelli says.

Today, BrightBytes is on its way to becoming an industry standard. But it began not too long ago at MIT Sloan as “ideas drawn on the back of napkins and on pieces of paper,” Anwar says.

In 2012, Mancabelli came to the EMBA program with aims of developing and scaling up technology that could help U.S. schools use hard data to find what works in the classroom. During the first week, he was grouped on a class project with Anwar, who had grown several successful tech startups in Silicon Valley — and was looking to put his entrepreneurship skills toward an altruistic cause. “I was in search of scale, and he was in search of a mission,” Mancabelli says. “It fit perfectly.”

Playing on each other’s strengths, they discussed a data-analytics platform that could link technology with student success. Within a couple of weeks, they’d built an early prototype of Clarity. Mancabelli pitched the platform to potential schools — and one jumped on the chance to purchase it.

Mancabelli recalls stepping out of class one day to answer a call from that school, which had offered $25,000 to build the platform. He then went back into his class, sat down next to Anwar, and texted him the information. “The look on his face and the way he raised his eyes when he got the text was priceless,” Mancabelli says.

In 45 days, they developed the CASE module and, a within a few months, had garnered 1,000 school clients across the nation.

Anwar attributes some of this early success to MIT Sloan’s rigorous EMBA program, which taught him how to bring ideas together, very quickly, into a tangible product. Another benefit was the program’s “very multidimensional” culture, he adds, where CEOs, novice and seasoned entrepreneurs, and senior executives, all with different skillsets and backgrounds, work together.

“There was a very diverse, unusual group of people who were the first-time collaborators with other people in other markets and industry,” he says. “That was a great learning experience.”

In fact, Mancabelli attributes BrightBytes’s rapid rise to this mixture of differing skillsets: his expertise on education, along with Anwar’s ability to produce technology at scale. “Hisham could translate my understanding of the pain points within schools, and solutions they needed, into a platform that would meet those needs,” Mancabelli says. “Having a grounding in what people in the market needed, as well as having grounding in what would scale to hundreds or millions of users, were two things that really accelerated our ability to grow.”