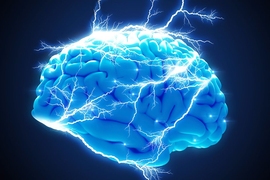 ↓ Download Image
Caption: People building their own devices for transcranial direct current stimulation (tDCS) have often invested substantial time looking at academic research on the subject. “They do look to scientific papers and in a lot of ways they do follow scientific precedent,” PhD student Anna Wexler says. “In other ways, they do their own thing.”

Caption:
People building their own devices for transcranial direct current stimulation (tDCS) have often invested substantial time looking at academic research on the subject. “They do look to scientific papers and in a lot of ways they do follow scientific precedent,” PhD student Anna Wexler says. “In other ways, they do their own thing.”

It may sound unusual, but it’s true: In recent years a growing number of people have been hooking their heads up to electrodes, in an attempt to stimulate their brains using a direct electrical current. Some of them do this via homemade devices; others may be using a new direct-to-consumer kit that just hit the market.

But why, exactly, are people doing such a thing at all? And to what extent should this practice — seen only in research labs until a few years ago — be regulated?

The first question is easier to answer than the second, according to Anna Wexler, a PhD student in MIT’s Program in Science, Technology, and Society, who had two new papers on the subject appear in academic journals this fall. Following lab research that started appearing 15 years ago, some people believe they can give themselves a kind of neurological tuneup through electrical stimulation, producing better-functioning brains.

As Wexler discusses in one paper, appearing recently in the Journal of Medical Ethics, the people building their own devices for transcranial direct current stimulation (tDCS) have often invested substantial time looking at academic research on the subject, some of which suggests positive outcomes from brain stimulation. Their ranks are being joined by more casual consumers who can now purchase inexpensive devices to do the same thing.

Such products have produced a regulatory debate among academic researchers. The U.S. Food and Drug Administration (FDA) has not approved tDCS as a treatment for any malady. On the other hand, if such tools are marketed as helping generalized “wellness,” not as a cure for one problem, they may fall outside the FDA’s purview.

“There are a lot of blurry lines in food, drug, and cosmetic regulation,” observes Wexler, who presents the most comprehensive research overview yet written on the nuances of the regulation issue, appearing this fall in an article for the Journal of Law and Biosciences. “The definition of a medical device is not based on a definition of its action, but on how the device is intended to be used. And the FDA has historically judged intended use by manufacturers’ marketing claims.”

Wexler was also one of the experts asked to speak at an FDA panel held on the topic in November.

Academic interest in tDCS gained currency after a 2000 paper by two German neurophysiologists showed that passing a weak electrical current through the motor cortex helped people perform motor tasks better. The volume of studies increased slowly for several years — about 100 in all through 2007 — but has shot up recently: There have been over 100 published studies in each of the last four years, with about 300 being published in 2014 alone. Several companies produce tDCS machines used in lab settings where such research takes place.

Researchers have not really reached a firm consensus on the effects of tDCS, however. As Wexler notes, “no serious adverse effects” have been found among 10,000 human subjects in academic research, but one study, published in the Journal of Neuroscience last year, found that tDCS appeared to impair cognitive function in at least some individuals. Still on the other hand, numerous studies do show some kind of functional cognitive enhancement due to tDCS.

Wexler’s original research on the do-it-yourselfers — what she terms the “DIY tDCS crowd” — in the Journal of Medical Ethics provides an initial demographic look at who they are. Wexler conducted interviews, and examined online videos, blog posts, and forums, and found that most of the people involved are male; come from one of three dozen countries; and include “at least a handful” of lab researchers.

“They do look to scientific papers and in a lot of ways they do follow scientific precedent,” Wexler says. “In other ways, they do their own thing.” For instance, because “there is no agreement on what level of tDCS is bad for you,” she adds, the DIY tDCS community reports a wide variety of usage patterns, from relatively light to heavy amounts of stimulation.

Other scholars say Wexler’s work is original and significant. Her research into the DIY tDCS community is the “best encapsulation of the near-history of this phenomenon, which has really arisen in the last four to five years,” says Peter Reiner, a professor of psychiatry and expert in neuroethics at the University of British Columbia, who has also studied the issue. Reiner adds that Wexler’s “scholarship is excellent,” and observes that it is unusual for a graduate student to be looked to as a voice for policymakers.

In lieu of a complete scientific consensus on the effects of tDCS, however, it is not yet clear who should regulate the devices, let alone in what ways.

As Wexler puts it in the Journal of Law and Biosciences paper, there is not a “regulatory gap” pertaining to brain stimulation, but rather, “there are multiple, distinct pathways by which consumer tDCS devices can be regulated in the United States.” For example, they could be regulated not by the FDA but as regular consumer devices, subject to consumer safety and advertising laws under federal agencies like the Consumer product Safety Commission and the Federal Trade Commission.

Whatever path lies ahead, Wexler suggests regulators should follow an “open engagement” model of reaching out to the community of tDCS users to get a sense of the extent of use and the degree to which new guidelines are needed.

“I think the open engagement approach is just more practical,” Wexler says. “You can’t crack down on people building the devices. If anybody wants to go out and buy a battery and wires, it’s their right to do so.”

On the other hand, engagement with users, and perhaps a third-party review of tDCS effects by a group such as the National Academy of Medicine, would encourage at-home tDCS users to follow regulatory prescriptions rather than going their own way.

“We’ll have to wait and see,” Wexler says of the regulatory debate’s outcome. “But the DIY community really looks to scientific papers for guidance. They do value what scientists say.”

Neuroscientists reveal how the brain can enhance connections