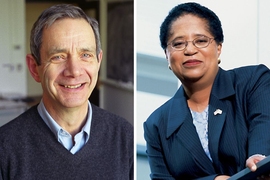 MIT Professor Emeritus Michael Artin and MIT Corporation Life Member Shirley Ann Jackson ’68 PhD ’73 are among 17 world-class researchers in the country who have been awarded the nation’s highest honors for scientists and innovators, the White House announced yesterday.

“Science and technology are fundamental to solving some of our nation’s biggest challenges,” Obama said in an announcement yesterday. “The knowledge produced by these Americans today will carry our country’s legacy of innovation forward and continue to help countless others around the world. Their work is a testament to American ingenuity.”

The National Medal of Science was created by statute in 1959 and is administered for the White House by the National Science Foundation. Awarded annually, the medal recognizes individuals who have made outstanding contributions to science and engineering. The president receives nominations from a committee of presidential appointees based on their extraordinary knowledge in and contributions to chemistry, engineering, computing, mathematics, and the biological, behavioral/social, and physical sciences.

The National Medal of Technology and Innovation was created by statute in 1980 and is administered for the White House by the U.S. Department of Commerce’s Patent and Trademark Office. The award recognizes those who have made lasting contributions to America’s competitiveness and quality of life and helped strengthen the nation’s technological workforce. A distinguished independent committee representing the private and public sectors submits recommendations to the president.

About the MIT recipients:

Michael Artin, a professor emeritus of mathematics at MIT, helped introduce and define a number of tools and theories in modern algebraic geometry, which is the study of solutions to algebraic equations. The eponymous Artin Stack, for example, is a generalized version of an algebraic stack. Artin’s contributions to the theory of surface singularities introduced several concepts — such as rational singularity and fundamental cycle — that became seminal to the field.

Artin was born in Hamburg, Germany, the son of Natalia Naumovna Jasny and Emil Artin, a distinguished mathematician who was noted for his work in algebraic number theory. Artin received an undergraduate degree from Princeton University in 1955 and a master’s degree and PhD from Harvard University in 1956 and 1960. He joined the MIT mathematics faculty in 1963, becoming a full professor in 1966.

Shirley Ann Jackson is the president of Rensselaer Polytechnic Institute and a life member of the MIT Corporation. Jackson earned a bachelor’s degree from MIT in 1968, and chose to continue her graduate work at the Institute, in part to encourage other African American and minority students to study at MIT. She received a PhD in theoretical elementary particle physics in 1973, becoming the first African American woman to earn a doctorate from MIT and the second African American woman in the United States to earn a doctorate in physics.

Jackson has held senior leadership positions in government, industry, and research, as well as higher education. Throughout her career, she has worked to advance STEM education for women around the world.

A theoretical physicist, Jackson is the 18th president of Rensselaer Polytechnic Institute, where she has led an ambitious strategic effort to transform the university’s pedagogical approach to emphasize greater collaboration. Prior to joining RPI in 1999, Jackson worked at Bell Laboratories and served on the faculty of Rutgers University. In 1995, her research in subatomic particles earned her the position of chair of the U.S. Nuclear Regulatory Commission.

From 2009 to 2014, Jackson also served on the President’s Council of Advisors on Science and Technology, which assists the White House in policy formulation in the many areas of science, technology, and innovation that are crucial to strengthening the economy and increasing opportunity. In 2014, she was appointed by President Obama as Co-Chair of the President’s Intelligence Advisory Board, which assesses issues pertaining to the quality, quantity, and adequacy of intelligence activities. She also sits on the Secretary of State’s International Security Advisory Board and the Secretary of Energy Advisory Board.

In addition to Artin and Jackson, this year’s awardees with MIT connections include alum Cato T. Laurencin ’87, a surgeon and university professor at the University of Connecticut who received a PhD in biochemical engineering/biotechnology from MIT; and Chenming Hu, professor of electrical engineering and computer sciences at the University of California at Berkeley, who was an assistant professor at MIT from 1973 to 1976. Both Laurencin and Hu are recipients of the National Medal of Technology and Innovation.