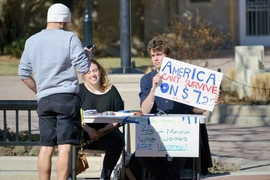 How far does a typical salary stretch? An increasingly visible movement in the U.S. to raise the minimum wage has gained traction recently. Yet according to the research of MIT Professor Amy Glasmeier, a minimum wage does not go very far: In a family with two parents and two children, the adults would each have to work 77 hours per week at minimum wage levels to make ends meet. That’s one of several noteworthy new numbers emerging from the latest update to Glasmeier’s Living Wage Calculator, a tool she and other researchers developed at MIT to present a realistic estimate, tailored by region, of the cost of living. Nationally, Glasmeier has found, over one-third of families earn less than a living wage. MIT News recently spoke with Glasmeier about the issue.

Q. What is the Living Wage Calculator you have developed, and how does it work?

A. In most industrial countries there is either a minimum wage or a living wage, which is an agreed rate of pay for work. This type of calculation occurs partly to put a floor underneath wage rates, so that people make enough money to pay their bills. This tool was developed to try to put a real value, based on local data, on the cost of living. … The difference between us and other countries is that we have an absolute value for the minimum wage, and they have a relative value that’s related usually to 60 percent of the median [wage]. From a global perspective, our minimum wage is very low.

The living wage calculator includes the basic elements of a cost of living: housing, food, child care, transportation costs, miscellaneous — which includes clothing, as well as taxes. It’s designed to be a minimum living wage that someone would need to be able to pay the basic expenses of their daily lives.

Q. You have just released an updated set of data that sheds new light on the disparity between the minimum wage and your estimated living wage. What is most striking to you about the new numbers?

A. When I look at the minimum wage compared to the living wage, in many places in the United States, it would take working two-and-a-half to three minimum wage jobs to make ends meet. So from the standpoint of how families are doing, we can say clearly that minimum wage as a baseline is making it very difficult for families. That’s the first thing that jumps out to me. The second thing is that we have the notion that it should be cheaper to live in rural places than in urban places, but the calculator helps to identity that the actual cost of living is usually about highly local circumstances. In some rural places, rental housing is basically unavailable, because most people own their own homes. So if you are searching for rental housing, the cost can be very high. Some factors that we take for granted, like being able to find a rental unit, actually end up presenting a much higher cost than you might think.

Another thing is that despite the fact that we know more than 50 percent of women work, we still as a society haven’t embraced the fact that child care is a critical element in our working families. It is a good that families need, for both parents to be able to make a living wage. Now the problem is, in a lot of places, child care is very expensive. Families are often faced with very difficult circumstances because they can’t live on one salary, but if they have the second person work, almost all of that salary goes to buying child care. Or, if they get child care, it may not be a certified licensed program. So what do families do? They will pool child care, use neighbors, siblings, their parents if they can, or find low-cost babysitting. But there is now pretty convincing research that children living in poor households lack a whole host of socialization skills and life skills. There are some issues associated with the psychological wellbeing and the knowledge acquisition capacity of kids when they’re not in situations of economic security.

Q. Recently we have seen companies such as IKEA pledging to pay a living wage, and Wal-Mart raising wages, though not to the living wage level. Is the landscape changing in this regard?

A. We are seeing a growing recognition of the need to have adjustments in wages that brings families above the minimum wage. There are cases that are not in the press, but where committed individuals, like the city manager of Elk Grove, Illinois, recognizes that the people they have on government contracts are making insufficient incomes to live in those communities. A lot of it is motivated by a sense of fairness. I get emails 365 days a year from people using the tool [the living wage calculator], which gets 100,000 hits a month, and those people strongly feel the nation would be better off if we paid higher wages, because people would have more stability, and would actually be able to engage in consumption, which would be important as a driver of the economy.

In terms of companies, there are well-known ones such as IKEA, which philosophically realize people need to make a living wage. Other companies are perhaps more pragmatic. They’re in labor markets where they realize the cost of living is high and want to make sure they’re getting employees who are matched well with the job. There are companies that are not famous — like one I know of in Savannah, Georgia, that works in alignment with the port, which trains people, and tries to negotiate for workers to get better wages in their next jobs.

In terms of regions, probably the calculator is used slightly more in the South, because in general, the South is the low-wage region of the U.S., but it has high costs. On the West Coast, you have dynamic economies, and there is social pressure for higher wages, and you also have enlightened employers — that applies to municipalities where the economy is dynamic. There are also places with a history of unionization, trying to use the calculator to demonstrate to employers the value of the living wage. There are also a lot of religious organizations deeply committed to social justice and make arguments for the living wage. … If you work eight hours a day, you deserve to be able to make it — I hear that all the time.

WBUR On Point host Meghna Chakrabarti speaks with Prof. Amy Glasmeier about defining poverty in the United States. “There is an ‘everybody has to make it on their own’ attitude and until that changes we’re going to be caught in this bind, but I think people themselves are evolving,” says Glasmeier.

Full story via On Point- WBUR →

Prof. Amy Glasmeier speaks with Greg Iacuurci of CNBC about the calculator she and her colleagues developed that displays what an actual living wage is in different areas of the country. “People are not surviving on the minimum wage,” says Glasmeier,

Writing for The Boston Globe, Prof. Amy Glasmeier, graduate student Zach Avre and Thomas Goff of Mass Economics argue for extending unemployment benefits and raising the federal minimum wage. “The quickest way to make all Americans sleep easier at night — and be willing to go back to work and help the economy recover — is by providing a living wage to get by in the era of COVID-19,” they write.

Prof. Amy Glasmeier speaks with New York Times reporter Eric Ravenscraft about the Living Wage Calculator, which uses specific data to estimate the cost of living in different areas of the country. “The question is, can you live on a minimum wage? And the answer is basically, no,” explains Glasmeier.

Using data from MIT’s Living Wage Calculator, CNBC "Make It" has mapped out the earnings needed for a single person to live comfortably in every state, reports Emmie Martin. The calculator, explains Martin, “takes into account factors such as child care and health insurance, in addition to food and other regular costs.”

Bourree Lam reports for The Atlantic on an interactive map of U.S. counties produced using Prof. Amy Glasmeier’s Living Wage Calculator. “Glasmeier says that firms can use it to estimate how to pay their employees fairly,” writes Lam.

Using their “Living Wage Calculator,” Prof. Amy Glasmeier’s team has created a map of the communities in the U.S. that have the widest gaps between living wages and minimum wages, reports Rob Wile for The Huffington Post.

Ana Swanson reports for The Washington Post on an interactive map created by Prof. Amy Glasmeier that displays the gap between minimum wages and living wages across the U.S. The map shows that the East Coast “is one of the most challenging places for minimum-wage workers to make ends meet.”

Boston.com reporter Megan Turchi writes that MIT researchers have developed a map that compares the cost of living and minimum wage for households across the U.S. Prof. Amy Glasmeier explains that one of her goals for the map is to “to inspire policy makers to step up and ensure their wage scales were livable.”

3 Questions: Michael Piore on labor disputes at the ballot box