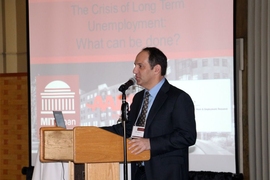 Caption:
MIT professor Ofer Sharone speaks at a conference, "The Crisis of Long-Term Unemployment," on May 6 at MIT.
Credits:
Photo: Robert Dolan

When workers remain unemployed for more than six months at a time, the toll is not just financial — it’s psychological. Again and again, the long-term unemployed describe themselves as having entered a “black hole” that they cannot seem to climb out of, according to the studies of MIT’s Ofer Sharone, who has extensively interviewed such workers.

This psychological toll occurs, in part, because workers sense that their joblessness is being held against them as they hunt for new work. And they are right: Employment data shows a steep drop-off in the proportion of workers hired after being out of work for six months, even if their job skills are highly relevant to the jobs available.

This increasingly high-profile problem was the subject of a MIT conference on Tuesday. Hosted by the MIT Sloan School of Management, the event featured almost 20 speakers from academia, government, and industry.

“It’s a moral issue,” said Sharone, an assistant professor of work and employment research. “It’s these individuals who we, as a society, are asking to pay the price, with their life savings, their homes. … Many of them come to fear that something is wrong with them.”

This means that while short-term unemployment has reverted to something close to typical levels, long-term unemployment has not. “The long-term unemployed are probably not structurally unemployed,” said Rand Ghayad, a visiting scholar at the Boston Federal Reserve. It is less likely they are suffering from a mismatch of skills, in his view, than from biases in the hiring process. An attention-grabbling experiment he recently conducted, by sending out fictitious resumes to firms, seems to have confirmed as much.

“We need a sense of urgency for this particular problem, long-term unemployment, in this country,” said Eric M. Seleznow, acting assistant secretary at the U.S. Department of Labor, in the conference’s keynote talk.

In that vein, much of the conference concerned the usefulness of various interventions for helping the long-term unemployed. As Seleznow pointed out in his remarks, the issue is on the White House’s radar; in late January, President Barack Obama hosted a one-day summit on the subject, citing Ghayad’s research and getting hundreds of companies to sign a pledge that they would not discriminate against unemployed job-hunters.

Leaders of several job-search and job-match programs discussed the strategies they use to get dejected workers back into active search mode, including networking, education programs, and other types of counseling; as some speakers noted, the long-term unemployed seem particularly prone to subsequent psychological problems.

However, in tight economic times, the funding available for nonprofit job-search organizations has also dwindled, making it harder for many workers to stay afloat in the job market.

“The level of public support we need to address this problem has been on a steady downward decline,” said Jerry Rubin, president and CEO of Jewish Vocational Services of Boston, an established search program. That decline is occurring as the need for resources grows: Rubin said that since the onset of the economic crisis in 2008, the average time his program’s participants spend looking for a job has increased from two months to nine months.

“In the big picture, there are not enough jobs for all these job seekers,” said John R. Fugazzie, founder of Neighbors-helping-Neighbors USA, a networking group for job-hunters.

The conference was also attended by a number of job-seekers and job-search experts, who were there to network and look for new ideas. Brian Melket, a white-collar IT worker from Massachusetts with years of employment experience in data centers, has been looking for a job for two years. He has been participating in Neighbors-helping-Neighbors, among other organizations.

“It’s been difficult,” Melket said. He added: “I never would have imagined I’d be out of work for two years. I had assumed three or four months.”

Still, Melket is maintaining an active search and was attending the conference partly to obtain new information or contacts: “You have to get off the couch,” he said.

Matt Casey, a career coach based in Cambridge, first encountered Sharone’s work a few years ago. Casey encourages clients, both with and without jobs, to evaluate the elements of a job that are most important to them, and then think broadly about new employment opportunities that may relate to those priorities.

“For the long-term unemployed, they feel there is something wrong and [think], ‘I don’t know how to fix it,’” Casey said. However, he added, the bottom-heavy job market has made many workers apprehensive that any kind of rigorous career examination will only lead to disappointment.

“People are fearful that there won’t be enough opportunities after that exploration,” Casey said.

Indeed, the lack of well-paying permanent jobs remains the biggest issue surrounding long-term unemployment. Strategies to level the job-search playing field for the long-term unemployed may be vital, but as Boston College professor David Blustein noted in the day’s final talk, there is no substitute for abundant opportunity.

“We need to create work for people so they can rebuild their shattered lives,” Blustein said.

When the job search becomes a blame game