From tornadoes to flooding, nature has taken a heavy toll in America this year. What are the challenges cities like Joplin and Tuscaloosa will face while rebuilding?
Peter Dizikes, MIT News Office
Publication Date:

Caption:
A roof in the Alberta community of Tuscaloosa, Ala., rests on the ground after tornadoes swept through the region in late April.
Credits:
Photo: U.S. Army Corps of Engineers
The recent series of tornados and floods in America has severely damaged many communities, from the Midwest to the South, and left them with enormous rebuilding tasks. Amy Glasmeier, head of MIT’s Department of Urban Studies and Planning, is a leading expert on regional and local economies in the United States, and on regional economic planning. MIT News spoke to her about the reconstruction challenges that lie ahead.

Q. Joplin, Mo., and Tuscaloosa, Ala., have both suffered catastrophic tornado damage this spring. These two cities have different economic histories: Joplin has been a mining hub, while Tuscaloosa has had a more diversified economy and a major university. Still, beyond the immediate, visible aspects of these tragedies, what are the common long-term dangers these cities face, in terms of sustaining economic activity?

A. Economic problems will emerge to the extent that the local economy is tied to trade and transportation. If the infrastructure is compromised, economic activity that was situated there due to location and access may pick up and move, or shift orders and business just to keep customers happy. There may also be some residual effect associated with concern that the region is vulnerable to this type of disaster. You can see the reluctance to invest in New Orleans as a side effect of the [Hurricane Katrina] disaster of 2005. If the business sector is highly interwoven, and firms that were untouched drew the majority of their market from local businesses, then there will be a slump and the remaining business could be affected.

There also is the people side of the equation. Key infrastructure such as hospitals, schools and other major employers like big-box stores were heavily damaged or destroyed. This not only removes the provision of services, but also weakens those that remain. If the population declines, then demand for goods and services declines, and business that might otherwise rebuild may see their markets wither and therefore choose not to stay. We have to take into account the changing nature of retail, which is being done more and more on the web.

On the other hand, a total disaster is an opportunity if there are sufficient funds to start new operations, support infrastructure upgrades and foster renewal. The question here is whether local businesses will be a part of this [process], or if organizations from outside move in. A lot depends on the condition of a place before its disaster — whether it was strong and vibrant, or moribund and dying slowly. 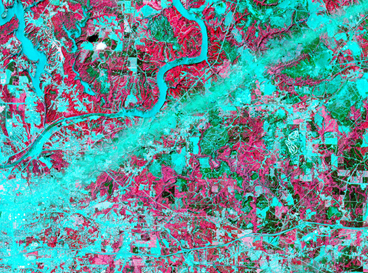 A satellite view of the tornado damage in Alabama.
Image: NASA
Q. What are some specific steps or investments urban and economic planners should keep in mind, in order to help rebuild communities and their economies, after events such as these?

A. Important issues include introducing new technologies, because upgrading opportunities arise out of disasters. Population dynamics are important: Was the population growing, stable or declining? Was the majority of consumption from local or non-local businesses? If rebuilding is an option, then a community should consider the spatial location of people and economic activity. Maybe a town was planned around a previous-era infrastructure that has outlived its useful life. Communities should not rebuild exactly what was wiped away, without considering how to make the planned nature of the community better and more responsive.

Q. You’ve studied regional disparities in wealth throughout the United States. To what extent are these events now exacerbating the economic problems in parts of the South, and in the process creating new difficulties for lower-wage workers?

A. Disasters hit the poor with ferocious power. The poor have little, and are often left with little. They often lack cash reserves or even wealth embodied in assets that might have been obliterated. A lack of insurance is common in low-wealth communities. At the same time, during the rebuilding phase, remaining infrastructure such as housing and local services will become scarce, and prices will rise. Low-income and low-wealth individuals can end up having to relocate outside existing population boundaries simply to find places to live. In addition, low-wealth individuals may be more reliant upon local service providers and social services in general. If these services were damaged or destroyed, then the social safety net that some people relied upon would be destroyed. These types of goods and services take time to form and will take time to replace. If there isn’t concern about the existing level of disparity, then the consequences can be particularly tough for low-wealth individuals.