Will the new industrial city work? 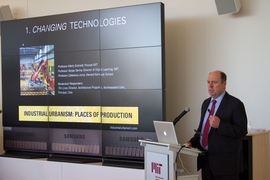 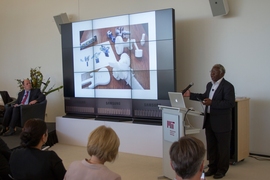 ↓ Download Image
Caption: Calestous Juma, a visiting professor the Department of Urban Studies and a research affiliate of the Center for International Studies at MIT.
Credits: Photo: Judith M. Daniels 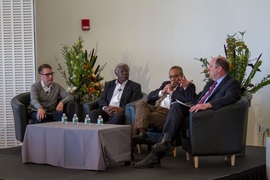 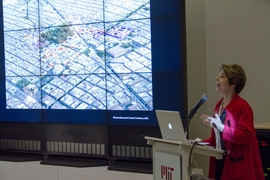 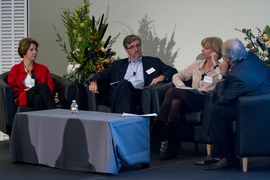 Caption:
Calestous Juma, a visiting professor the Department of Urban Studies and a research affiliate of the Center for International Studies at MIT.
Credits:
Photo: Judith M. Daniels

That question was at the heart of an MIT symposium, held Monday, that highlighted distinctly promising news about manufacturing, and distinct challenges for urban planners. The promise is that many varieties of high-tech manufacturing have emerged in recent years, in areas including nanotechnology, medical devices, advanced materials, and digital production. Those industries often take smaller-scale forms that could be adapted to existing urban spaces, helping to revitalize cities.

“There’s this huge opportunity for those of us working on advanced manufacturing technologies to think about technologies which can allow production at small scale, local to where innovation is occurring, and then allow a path to scale up,” Martin Schmidt, MIT’s provost, said.

In recent decades, Schmidt noted, many older manufacturers have downsized their research divisions and outsourced production capacity in an effort to please investors — leaving a large opening for newer firms to emerge. Schmidt’s own research group works on micro- and nanoscale fabrication of devices, sensors, and systems; as an example, he noted that it is possible that enterprises could take advantage of such advances to manufacture semiconductors at smaller scales.

“If we’re successful in doing that, what we’re going to enable is a whole set of semiconductor factories in Kendall Square that are in a 100, or 200-square-foot room on a 10-foot table, that have a lot less environmental impact. … We’re going to unlock a huge array of innovation, and we’re really going to speed up innovation in this space,” said Schmidt, who was a faculty participant on MIT’s multiyear study of the sector, Production in the Innovation Economy (PIE).

Schmidt also served as faculty lead for MIT on the White House’s Advanced Manufacturing Partnership (AMP) 2.0, a project intended to renew industrial innovation in the U.S. The AMP 2.0 steering committee, which was co-chaired by MIT President L. Rafael Reif, delivered its final report on Monday to U.S. President Barack Obama.

If cities have an opportunity to import new, smaller, cleaner manufacturers, however, politicians and planners in many cities will still have difficult decisions to make about precisely where to place them, and on what terms. Many cities could experience a new round in “the conflict between commerce and housing,” in the words of Neil McCullagh, executive director of the American City Coalition, a nonprofit group backing neighborhood-scale growth initiatives, and one of several symposium participants voicing that concern.

The renewed growth of manufacturing also comes during “almost a decade of pure angst” in society due to an economy that plummeted in 2008 and is still “relatively sluggish,” MIT economic geographer Amy Glasmeier said. As she noted, adult labor-force participation in the U.S. is currently 63 percent, down from a high of 84 percent for males, and it will take considerable economic growth to restore jobs.

“We’re going to hope we have organizations that grow and create jobs,” Glasmeier said.

The symposium, “Industrial Urbanism,” was hosted by MIT’s Department of Urban Studies and Planning (DUSP), and held at the MIT Media Lab. Its co-organizers were DUSP chair Eran Ben-Joseph, and Tali Hatuka, head of the Laboratory for Contemporary Urban Design at Tel Aviv University. Among the event's essential questions, as Ben-Joseph noted in his remarks: “Is there a way to design in an industrial city while also nurturing livability and quality of life for residents?”

In the case of new manufacturing, some participants noted, there is a logical aspect to city planning: Place matters, and for startups and other firms growing out of research labs and academia, that means proximity to universities is important. For many firms, there is a “need to be tightly connected” to intellectual resources, noted Fiona Murray, an associate dean and professor at the MIT Sloan School of Management.

But the idea of planning urban growth around intellectual capital is never entirely straightforward, and involves nuts-and-bolts questions about industrial building stock, for instance. As several conference speakers noted, new industrial structures tend to have high ceilings to allow triple-stacks of standardized industrial pallets to be moved in and out by forklifts. Beautiful older industrial buildings may not be perfectly suited to adaptation for new manufacturing, leading to a variety of planning and design quandaries.

Some participants also suggested that the ideal planning perspective for new manufacturing is regional, and not just urban.

“We have to be talking about advanced manufacturing not just from the central city perspective,” said Elizabeth Reynolds, executive director of MIT’s industrial performance center. Reynolds examined eight advanced-manufacturing industries in Massachusetts; while several of these are concentrated in the eastern part of the state, productive machine shops are actually scattered throughout the state, meaning that growth businesses can be located “in older industrial landscapes.”

The symposium also included talks on the potential for more far-reaching changes in urban form. Sanjay Sarma, MIT’s director of digital learning, who as a mechanical engineering professor has extensively worked on RFID technologies and supply-chain logistics, suggested that automated delivery technologies — from drones to vehicles — will grow more prevalent in the future. That could change logistics and urban infrastructure, Sarma noted, adding that a key question is: “How much can we ensure that [transformation] is in service of the needs of the city, rather than being thrust on the city?”

The question of urban growth around advanced manufacturing is hardly peculiar to the U.S.: In countries with less established manufacturing, there may be more opportunities to integrate industry in metropolitan areas, since “latecomers can start from scratch,” said Calestous Juma, an expert in African innovation who is the Martin Luther King Jr. Visiting Professor of Urban Studies and Planning at MIT, and professor of the practice of international development at the Harvard Kennedy School. He added: “African countries have this unique opportunity to rethink the character of their cities.”

Exploding the myths of manufacturing