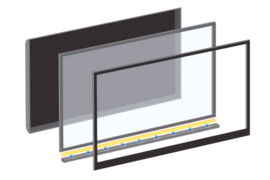 ↓ Download Image
Caption: Manufacturers implement the Color IQ component (shown here as a thin, yellow bar) into their televisions during the normal construction process, but use blue LEDs (blue dots) in place of the standard white LED back lights.
Credits: Courtesy of QD Vision

Caption:
Manufacturers implement the Color IQ component (shown here as a thin, yellow bar) into their televisions during the normal construction process, but use blue LEDs (blue dots) in place of the standard white LED back lights.
Credits:
Courtesy of QD Vision

Caption:
In this image, Color IQ is used to produce 100 percent of the color gamut in all squares except the center square, which appears more faded.
Credits:
Courtesy of QD Vision

If LCD TVs start getting much more colorful — and energy-efficient — in the next few years, it will probably be thanks to MIT spinout QD Vision, a pioneer of quantum-dot television displays.

Quantum dots are light-emitting semiconductor nanocrystals that can be tuned — by changing their size, nanometer by nanometer — to emit all colors across the visible spectrum.

By tuning these dots to red and green, and using a blue backlight to energize them, QD Vision has developed an optical component that can boost the color gamut for LCD televisions by roughly 50 percent, and increase energy-efficiency by around 20 percent.

These are currently only available in China, “because a lot of growth for the TV market is there,” says Seth Coe-Sullivan PhD ’05, co-founder and chief technology officer of QD Vision, who co-invented the technology at MIT. But within a couple of months, he says, these displays will be “rolling out to the rest of the world.”

In conventional LCD TVs, pixels are illuminated by a white LED backlight that passes through blue, red, and green filters to produce the colors on the screen.

But this actually requires phosphors to convert a blue light to white; because of this process, much light is lost, and displays only reach about 70 to 80 percent of the National Television Standard Committee’s color gamut. Manufacturers can potentially boost color by incorporating more LEDs, but this costs more and requires more energy to run.

Color IQ is a thin glass tube, filled with quantum dots tuned to red and green, that’s implemented during the synthesis process. Manufacturers use a blue LED in the backlight, but without the need for conversion phosphors. As blue light passes through the Color IQ tube, some light shines through as pure blue light, while some is absorbed and re-emitted by the dots as pure red and pure green.

With more light shining through the pixels, LCD TVs equipped with Color IQ produce 100 percent of the color gamut, with greater power efficiency than any other technology.

“The value proposition is that you are not changing the display, all you’re doing is replacing the light bulb, and yet the entire display looks much better. The colors are much more vivid — known as much more saturated — allowing you to generate a much more believable image,” says QD Vision co-founder and scientific advisor Vladimir Bulovic, the Fariborz Maseeh Chair in Emerging Technology at MIT, who also co-leads the MIT Innovation Initiative.

Green from “cradle to grave”

While developing its Color IQ — which replaces phosphor in displays — the company developed a much greener synthesis, according to the EPA. This synthesis involves replacing alkyl phosphine solvents with long-chain hydrocarbons, which are less hazardous, and replacing cadmium and zinc building blocks with less hazardous materials.

This eliminates 40,000 gallons of toxic solvents and 100 kilograms of toxic cadmium waste in U.S. production each year. Using the components in 20 million TVs is projected to save 600 million kilowatt-hours of electricity per year worldwide — enough electricity to power 50,000 average U.S. homes.

“We’ve been able to show, cradle to grave, from the materials we use to how we make it to how it’s put to rest, that there’s an environmental benefit,” Coe-Sullivan says.

Other technologies, called organic light-emitting diode (OLED) displays, use an organic compound to reach upward of 100 percent of the color gamut — but they are very expensive to produce. LCD TVs made with Color IQ are just as colorful, but are made for a few hundred dollars less and operate with greater efficiency, Coe-Sullivan says.

Lighting to displays, and back

QD Vision’s technology began at MIT more than a decade ago. Coe-Sullivan, then a PhD student in electrical engineering and computer science, was working with Bulovic and students of Moungi Bawendi, the Lester Wolfe Professor in Chemistry, on implementing quantum dots into electronic devices.

In a study funded by MIT’s Deshpande Center for Technological Innovation, Coe-Sullivan, QD Vision co-founder Jonathan Steckel PhD ’06, and others developed a pioneering technique for producing quantum-dot LEDs (QLEDs). To do so, they sandwiched a layer of quantum dots, a few nanometers thick, between two organic thin films. When electrically charged, the dots illuminated a light bulb 25 times more efficiently than traditional devices.

The resulting paper, published in Nature in 2002, became a landmark in the quantum-dot-devices field. “Soon venture capitalists were calling Vladimir, asking if we’d spin a company out,” Coe-Sullivan says.

Coe-Sullivan started toying around with the idea of starting a company. Then, a chance encounter at a cocktail party at the Martin Trust Center for MIT Entrepreneurship — with a former classmate, QD Vision co-founder Greg Moeller MBA ’02 — sped things along. Early in the evening, the two started discussing Coe-Sullivan’s QLED advancements; they soon found themselves up all night in a lab in Building 13, fleshing out a business strategy.

In 2010, the company launched its first product, a QD light bulb, with partner Nexxus Lighting. However, realizing this $100 light bulb would soon need to sell for $10 to remain competitive, QD Vision saw that it needed a new market: quantum-dot displays. “Making a transition like that [from lighting to displays] tests the nerves of folks involved, from top to bottom,” Coe-Sullivan says. “QD Vision’s story is one of many … tense moments, and that was one of them.”

Pooling all resources into displays, the company eventually caught the eye of Sony, and last year became the first to market with a quantum-dot display. Today, QD Vision remains one of only two quantum-dot display companies that have seen their products go to market.

Now, with a sharp rise in commercial use, quantum-dot technologies are positioned to penetrate the display industry, Coe-Sullivan says. Along with Color IQ-powered LCD TVs, Amazon released a quantum-dot Kindle last year, and Asus has a quantum-dot notebook. “And there’s nothing in between that quantum dots can’t address,” he says.

In the future, Coe-Sullivan adds, QD Vision may even go back and tackle its first challenge: QD light bulbs. “The market has stabilized quite a bit,” he says. “Somewhere down the line, we think there’s an application and value proposition for quantum-dot lighting.”

Quantum-dot LED may be screen of choice for future electronics

Quantum-dot LED may be the future of screens