Can the U.S. and Russia make more progress on nuclear security? 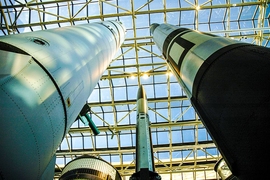 Political tensions between the U.S. and Russia have increased in the last year, raising concerns about how effectively the two states will be able to pursue nuclear arms-reduction goals.

Striking a note of cautious optimism in an MIT talk yesterday, Rose Gottemoeller, U.S. undersecretary of state for arms control, praised Russia’s “businesslike” enforcement of the U.S.-Russia New START Treaty, but cited a need for continued progress in other areas of nuclear security.

“The United States and Russia are continuing to implement the treaty in a businesslike manner, despite all the tensions,” Gottemoeller said, referring to the military conflict in the Ukraine. The U.S. accuses Russia of occupying Ukrainian territory in Crimea; Russia claims the area is historically its own.

The U.S. and Russia inspect each other’s facilities 18 times a year as part of the New START Treaty, which was signed in 2010, went into effect in 2011, and calls for a reduction to 1,550 nuclear warheads deployed on certain delivery systems by the year 2018.

Gottemoeller said that “the Russians have been good partners” on issues such as removing chemical weapons from Syria, and reiterated American willingness to reduce nuclear arsenals by a further one-third, an offer President Barack Obama made publicly at a speech in Berlin in 2013.

“The greatest prize at the current time is if we can get the Russians to [pursue] the Berlin” proposal, Gottemoeller said.

Still, as Gottemoeller made clear in her remarks, areas of arms-control friction remain between the two states right now. She noted a central one early in her talk: The U.S. contends that Russia has been in violation of the Intermediate-Range Nuclear Forces Treaty (INF), a 1987 U.S.-Soviet Union pact that bans ground-launched nuclear and conventional weapons with a range of up to 5,500 kilometers.

“We have been attempting to press this very serious matter with the Russian Federation,” Gottemoeller said, emphasizing that the U.S. is “fully committed to the continued viability of the INF treaty, and we are in full compliance with it.”

She emphasized that public awareness of both the ongoing threat posed by nuclear weapons and of recent progress in arms control needs to be enhanced.

“At the end of the Cold War, the looming threat of nuclear war seemed to drift away,” Gottemoeller said. Public support for nuclear security has a practical dimension to it, since the U.S. Senate must ratify arms treaties — and public opinion has the ability to sway senators.

The U.S. has also significantly reduced a stockpile of what was once 31,000 nuclear weapons, Gottemoeller noted; in another area of progress, the U.S. and Russia have collaborated on a program that has repurposed Russian nuclear materials — the equivalent of thousands of bombs — into nuclear-energy fuel in the U.S.

As for the next steps for nuclear security, Gottemoeller suggested that further bilateral arms reductions between the U.S. and Russia should take precedence over multilateral arms-reduction talks among several of the world’s nuclear powers, including Britain, France, and China.

“To my mind, this [multilateral approach] doesn’t make sense, because the U.S. and Russia control 90 percent of nuclear weapons,” Gottemoeller said.

The U.S. and Russia will also need to work together next spring to perform the mandated five-year review of 1970’s Treaty of the Non-Proliferation of Weapons (NPT), the world’s largest and longest-lasting global nuclear-weapons agreement.

Gottemoeller said it could be “a difficult review conference” for multiple reasons, including U.S. concerns over the spread of nuclear materials in the Middle East. However, she stated, “I want the NPT regime to be increasingly and constantly strengthened.”

Moreover, Gottemoeller emphasized, “It is in the U.S. interest, and in the interest of countries around the world, that the 70-year history of nonuse of nuclear weapons be continued.” She concluded her talk by quoting former U.S. President Calvin Coolidge, in what could be a mantra for arms negotiators: “Nothing in the world can take the place of persistence.”