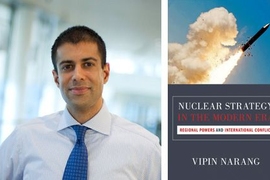 ↓ Download Image
Caption: Vipin Narang and the cover of his new book, “Nuclear Strategy in the Modern Era"
Credits: Courtesy of MIT Department of Political Science and Princeton University Press 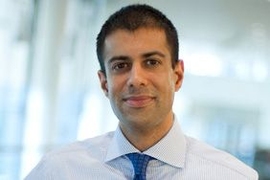 Caption:
Vipin Narang and the cover of his new book, “Nuclear Strategy in the Modern Era"
Credits:
Courtesy of MIT Department of Political Science and Princeton University Press

During the Cold War, nuclear-weapons strategy was oriented around the doctrine of “mutual assured destruction”: The world’s two superpowers, the United States and the Soviet Union, both knew that any use of nuclear arms would lead to an escalating exchange that would annihilate both counties.

This strategic paradigm has its limits, though: The world of two diametrically opposed superpowers has since changed. Today, most countries with nuclear weapons, or an active nuclear capability, have smaller arsenals and are situated in different political circumstances than existed during the Cold War. Most of those countries are regional powers, not global forces. For these reasons, our approach to nuclear doctrine needs an overhaul, suggests Vipin Narang, an assistant professor of political science at MIT who has studied nuclear strategy and security issues.

“There’s a lot of texture in the way regional nuclear powers have thought about nuclear strategy and optimized their forces,” Narang says. “India and Pakistan are two different types of nuclear states. China thinks about nuclear weapons differently than, say, South Africa or Israel [does]. There is a diversity of regional nuclear power strategies.”

Now, in a new book, “Nuclear Strategy in the Modern Era,” published this week by Princeton University Press, Narang lays out his own new paradigm for thinking about nuclear strategy. Beyond the U.S. and Russia, states have nuclear arsenals for multiple reasons — which, in turn, shape how they might potentially deploy their weapons. Recognizing this, Narang asserts, can help us craft new, nuanced policies that are better suited to preventing nuclear weapons from being used, either intentionally or by mistake.

“Knowing which strategy a regional power can and does adopt helps us think about what types of risk are present in a crisis or peacetime,” Narang says.

In the book, Narang makes the case that there are three distinct strategies regional powers adopt with regard to their nuclear arsenals. The first is what he calls the “catalytic” posture, in which a state has a small number of nuclear weapons, but uses them to get a superpower — usually the U.S. — to intervene on its behalf. In this sense, the weapons are the catalyst that forces the U.S. to smooth over regional conflicts. Historical examples, in Narang’s view, include Israel in the 1970s and Pakistan in the late 1980s.

“It’s a political strategy that’s designed to strengthen the reliability of a superpower patron in a conflict to help the state,” Narang says. “It’s only available to the regional powers.”

A second nuclear posture, which Narang calls “assured retaliation,” exists when a state develops a sufficiently large and dispersed arsenal to be able to retaliate if it is the victim of a nuclear attack. This strategy is exemplified by China and India, in his view.

“Having a secure second-strike capability is designed to deter nuclear use and coercion,” Narang says. “They have small arsenals, but large enough to credibly threaten retaliation if nuclear weapons are used against them.” He adds: “Both China and India view nuclear weapons as primarily political deterrent tools and not as active war-fighting instruments. This is the classic nuclear strategy where the state is developing nuclear weapons basically to assure the existence of the state.”

The strategic drawback to this posture is that other states often recognize that the nuclear weapons are a threat of last resort, to be used only in case of prior nuclear attack.

That is not the case with the third posture Narang identifies, which he calls the “asymmetric escalation” strategy. In this case, a state deploys a nuclear arsenal to present a credible threat of a first nuclear strike, in response to a conventional, non-nuclear attack. This was France’s posture during the Cold War, and is Pakistan’s posture today, Narang observes, as a way — necessary or not — of securing its borders against India.

“This is explicitly designed to deter conventional conflict,” Narang explains. “It moves up a spectrum of aggressiveness.” Countries with this posture tend to delegate authority for a strike to certain military leaders — which may present problems for the rest of the world, since the procedures for using nuclear weapons may not involve many safeguards. “The challenge is really command and control, safely managing its nuclear arsenal,” Narang says.

Recognizing this diversity of nuclear postures, Narang says, can not only help us better interpret geopolitics today, but think more flexibly about potential problems of the future.

“I think there’s a myth that once a state acquires nuclear weapons, they’ll never face another conflict again,” Narang states. “But nuclear weapons by themselves don’t [always] deter conventional conflict.” Moreover, a state’s nuclear posture can evolve over time, as it has in the cases of France, Pakistan, and perhaps Israel and South Africa; policymakers should be aware that states are not locked into the same outlook indefinitely.

“Nuclear Strategy in the Modern Era” has received praise from other scholars of nuclear security and international relations. Robert Jervis, a political scientist at Columbia University, says the book “combines rich empirical research and careful theorizing to add greatly to our understanding of deterrence.” Alexander Downes, a political scientist at George Washington University, says Narang’s “conclusions have wide-ranging implications for the way we think about nuclear deterrence.”

Narang acknowledges that the book’s findings do not precisely fit the nuclear nonproliferation agenda, since he identifies some states where the weapons appear to have ongoing practical use as a deterrent. He characterizes his own view on limiting arsenals as a “realistic” one, in which reduction is possible and desirable, while the total elimination of nuclear weapons is less likely.

“In our lifetimes, getting to nuclear zero may not be possible,” Narang suggests. “I think the conversation should probably be shifted from zero to low numbers. Because there is an attendant risk: The more nuclear weapons there are, the more chance of inadvertent use. But there’s no reason we can’t achieve substantial reductions.”