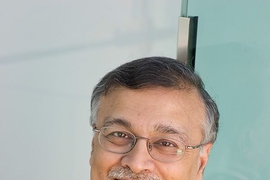 Rett syndrome, a rare genetic disorder that causes intellectual disabilities, autism, and physical deformities, has no cure. However, a small clinical trial has found that a growth factor known as IGF1 can help treat some symptoms of the disease.

Children who received the drug for four weeks showed improvements in mood and anxiety, as well as easier breathing, in a trial led by researchers at Boston Children’s Hospital. MIT scientists first identified IGF1 as a possible treatment for Rett syndrome in 2009.

“This trial shows that IGF1 is safe in the cohort of 12 kids, and at least on certain measures, it provides some effectiveness,” says Mriganka Sur, the Paul E. and Lilah Newton Professor of Neuroscience at MIT and an author of the paper, which appeared recently in the Proceedings of the National Academy of Sciences.

In two other PNAS papers appearing today, Sur’s lab reports some of the molecular detail behind the mechanism of IGF1 action. His team also found that in mice, another drug, clenbuterol, appears to enhance the effectiveness of IGF1.

Rett syndrome affects about one in 10,000 girls. The gene that causes the disease, MeCP2, is carried on the X chromosome, so the condition is usually fatal in boys because they don’t have a healthy X chromosome to counteract the effects of the mutated version.

Girls with Rett syndrome tend to have smaller brains, smaller neurons, and fewer synapses than usual. Common symptoms include handwringing, seizures, gastrointestinal disorders, and difficulty walking, speaking, and breathing. However, there is a great deal of variability among patients because in every body cell, only one copy of the X chromosome is active. If a majority of cells express the healthy version of the X chromosome, the symptoms are less severe.

The MeCP2 gene codes for a protein that modifies chromatin — the protein-DNA complex that forms within a cell’s nucleus. These chromatin modifications influence the expression of genes by controlling access to DNA. MeCP2 also modifies microRNAs, which are very short strands of RNA that help regulate gene expression.

Four years ago, researchers in Sur’s lab found that they could reverse many of the symptoms of Rett syndrome in mice by treating them with a small fragment of insulin-like growth factor 1 (IGF1). In one of the recent PNAS papers, the researchers found that the full-length form of IGF1 also reverses symptoms in mice, which is significant because the U.S. Food and Drug Administration has already approved the full-length form to treat children whose growth is stunted.

Three years ago, initial results of that study provided the anchor for the recent clinical trial to go forward, Sur says. The study was led by former MIT postdoc Jorge Castro and graduate student Rodrigo Garcia.

In the other PNAS paper, Sur, lead author Nikolaos Mellios, an MIT postdoc, and colleagues discovered a complex pathway by which MeCP2 regulates IGF1 production. They found that without MeCP2, there is not enough brain-derived neurotropic factor (BDNF), which in turn reduces the amount of a microRNA processing factor called lin28a. Loss of lin28a leads to overproduction of a microRNA called let7f, and this abundance of let7f inhibits IGF1production.

To help confirm that this pathway is correct, the researchers treated mice lacking MeCP2 with clenbuterol, a drug that is known to stimulate BDNF production. After this treatment, the lin28a protein was produced at normal levels, restoring the rest of the pathway that leads to IGF1 production. The treatment also improved breathing, motor coordination, and the ability to recall social interactions.

Unlike most other studies of Rett syndrome treatment, both of these studies included female mice, which Sur says is important because all human patients are girls.

In the United States, clenbuterol is approved as a veterinary treatment for asthma, but not for human use; it is approved for human use in Europe. Sur says his team has no plans for clinical trials of clenbuterol. “We just put our findings out there. More research is needed before it can be used in humans, but the possibility certainly exists,” says Sur, who is director of the Simons Center for the Social Brain and a member of MIT’s Picower Institute for Learning and Memory.

This finding “presents another novel treatment for Rett syndrome that results in improvement in the mouse model and, together with IGF-1, further extends life span as opposed to either drug by itself, much like has been found in the treatment of cancer where multiple medications are more helpful than one,” says Leonard Rappaport, chief of the Division of Developmental Medicine at Boston Children’s Hospital, who was not part of the research team.

In the Phase I clinical trial of IGF1, the researchers gave the drug to 12 girls ranging in age from 2 to 10, all of whom had Rett syndrome. Each girl received the drug for four weeks, and there were no adverse side effects. Patients also experienced some improvements in mood and in respiratory function, which is particularly important because apnea and irregular breathing are common features of Rett syndrome, Sur says. Respiratory function also provides a way to measure the effects of the drug without having to rely on patient or family reports of neurological symptoms.

“An autonomic measure such as respiration is immune to a placebo effect and provides a strong biomarker for treatment of the disorder,” Sur says.

The trial was led by Walter Kaufmann, director of the Rett Syndrome Program at Boston Children’s Hospital, and performed by researchers there and at Harvard Medical School. A larger Phase II trial, with 30 children, is now underway.

If IGF1 proves successful in treating Rett syndrome, it might also find use against other disorders that involve some of the same molecular pathways, such as other forms of autism, Sur says.

“It’s a window into how you might treat a developmental disorder based on the molecular mechanisms. With any autism that affects these molecules, this drug may well end up being effective,” he says.

Sur’s lab is now working on making neurons from human skin cells taken from Rett syndrome patients so the researchers can study more closely what goes wrong in them. He also hopes to uncover the specific effects caused by mutations in different sections of the MeCP2 gene, which could lead to drugs that target individual effects more specifically, Sur says.

“There is no doubt that you should treat neuropsychiatric disorders in an intensely personal way,” he says. “I hope in my lifetime we will reach a place where some girls with Rett syndrome get IGF1 alone because they have a deficit in the part of MeCP2 that strongly regulates IGF1 through the microRNA mechanism, while some girls get much less IGF1 but receive something else that affects other parts of what MeCP2 does.”

Back to (brain) basics

A possible treatment for Rett syndrome