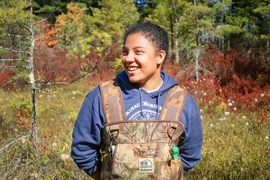 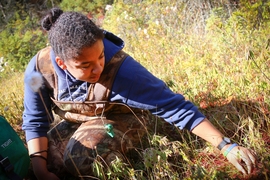 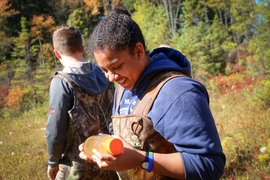 Early one morning last January, MIT undergraduate Theresa Oehmke was eating breakfast at the Kilauea Military Camp on Hawaii’s Big Island when a colleague burst into the room, yelling, “Oh my god, the plume, it’s moving! We have to go chase it now!”

Without asking questions, Oehmke threw together a few belongings, grabbed a few slices of cheese for sustenance, and hopped into a van. She and her peers were in hot pursuit of a column of volcanic smog that was quickly rising out of reach.

The experience was part of course 1.092 (Traveling Research Environmental Experiences, or TREX), offered by MIT’s Department of Civil and Environmental Engineering (CEE) during each January’s Independent Activities Period. Through the course, Oehmke, a CEE major, embarked on a two-week journey to Hawaii, collecting air samples from this volcanic plume to measure sulfur dioxide emissions — a somewhat precarious process that relies largely on calm winds and good timing.

When the Earth cools at night, a boundary layer — the layer of air closest to the planet’s surface —  decreases in size, trapping such volcanic plumes closer to the ground. But when the sun rises and the Earth warms again, this boundary layer rises, pushing the plume farther away, making it tougher to collect samples — so 6 a.m. expeditions, when the sun had barely risen, was par for the course for Oehmke and her group.

“It was a crazy experience,” Oehmke says. “We were basically like those people who chase extreme weather.” Depending on the plume’s height, she and her team sometimes relied on unmanned aerial vehicles to collect samples.

Although a memorable adventure, this wasn’t her first experience with fieldwork.

Oehmke’s introduction to CEE came through a freshman seminar that exposed her to labs studying everything from soil moisture content to flow through wetlands. The course brought her to Boston’s “Big Dig” and to Cape Cod’s Woods Hole Oceanographic Institute, and taught her skills such as how to collect groundwater samples. Oehmke took to the subject, and immediately signed up for six weeks of summer fieldwork in Dakar, Senegal, where she studied how that city interacts with its water system.

“I think a lot of times when people hear about Africa they think that no one has clean drinking water, but they do in many parts, including Dakar,” Oehmke says. “What they didn’t have was a sewer system.”

She wondered what became of the city’s waste, and began interviewing local residents and water professionals to investigate the effects of not having a sewer system on the health of the community and the surrounding ecosystem. She wanted to know what exactly environmental engineers do before committing to the field.

“As the years have gone on I’ve realized that [environmental engineers] kind of do everything,” Oehmke says. “There’s the sustainability part, the soil hydrology part, there’s really everything that you could want to do in one field.”

She returned to MIT for her sophomore year, sure of her major and future career, but without formal lab experience.

Getting in on the ground level

The next summer, through the MIT International Science and Technology Initiatives (MISTI), Oehmke traveled to Paris to join Manuel Blouin’s lab at the Université Paris-Est Créteil, where she would study the effects of maize and earthworms on the greenhouse-gas emissions of soil.

The task was formidable: try her hand at lab work for the first time, and do it in French. She was thrown into Blouin’s lab alongside PhD candidates and postdocs who were six or seven years her senior — but despite the age, language, and cultural barriers, Oehmke remained enthusiastic.

She helped replicate a study that found that adding both maize and earthworms to soil reduced its carbon dioxide emissions, especially as temperatures rise. The finding challenged the notion that emissions are cumulative. Instead of separate emissions from soil, maize, and worms adding up to the sum of their parts, it’s possible that microbial interactions contribute to keeping some of the carbon dioxide out of the atmosphere.

This past summer, Oehmke was back in the U.S., researching debris flow at the University of Minnesota through a 10-week research placement funded by the National Science Foundation.

Unlike her experience in France, where she replicated a piece of an ongoing study, in Minneapolis Oehmke was part of the research process from the ground up — literally. She helped design a way to better understand debris flows — collections of soil and rock that rush downhill when water accumulates. Like avalanches and landslides, debris flows can grow in size as they travel; Oehmke wanted to learn how to predict their severity as they form.

“The research was interesting, and something I could really understand,” she says. “It’s how I discovered that I really liked looking at the land-water boundary.”

This interaction of land and water flows through Oehmke’s life; her two biggest extracurricular commitments involve water. For four years, she has been the captain of the Women’s Water Polo Club, while also serving in a variety of leadership positions for Amphibious Achievement, an athletic and academic mentorship program run by MIT students for Boston-area high school students. The group aims to expose inner-city students to traditionally inaccessible athletic opportunities — like competitive swimming and rowing — and then teaches them to harness their athletic discipline for academic focus, SAT preparation, and college counseling.

Oehmke finds the opportunity to teach high-school students to think outside the box exhilarating. “Instead of looking at a [test] question, and whether the answer is A, B, C, or D, we help [students] to see these topics as real-world situations,” she says. “We want them to think critically.”

Oehmke plans to continue her own education next year at graduate school, where she will pursue her interest in the interactions between land and water.

“I’m mostly looking at grad schools on coastlines,” she says with a laugh.