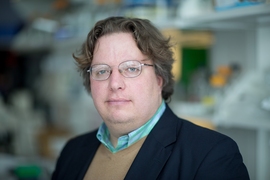 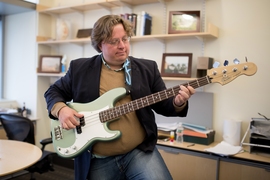 Most cancer patients receive one or more of the frontline chemotherapy drugs that have been discovered over the past 50 years. These drugs are often effective but have major drawbacks, including severe side effects and the possibility that tumors will become resistant to them.

Michael Hemann, the Eisen and Chang Career Development Associate Professor of Biology at MIT, is trying to figure out how tumors develop that resistance, in hopes of developing new drugs that could overcome it. “The challenge is to really understand the biology of how a tumor cell adapts to a particular therapy,” says Hemann, who is a member of MIT’s Koch Institute for Integrative Cancer Research.

Hemann’s studies of cancer genetics could also help improve deployment of existing drugs. Many genetic studies have shown that certain drugs work best on tumors with a particular combination of mutations. This kind of information is necessary to develop personalized treatments, which Hemann believes could greatly improve cancer-treatment success rates.

“There’s really a scarcity of genetic information that goes into the decisions about what to treat patients with. Maybe 3 to 5 percent of patient diagnoses involve a genetic alteration that directs therapy,” he says. “Being able to come up with innovative ideas about how best to use existing sets of chemotherapy allows one to almost immediately implement a change in regimen at the clinic.”

While scientists originally believed that tumor resistance arose from specific mutations that might allow a cell to pump cancer drugs out of the cell, or to break them down, Hemann and others have turned up some new ideas about how tumors respond to the first round of chemotherapy.

When cancer drugs are given, a small percentage of tumor cells appear to receive the same kind of survival signals that the body normally uses to protect stem cells and other immature cells from stresses such as ultraviolet radiation, Hemann says. Those cells survive treatment and can eventually regrow the tumor. This phenomenon, known as minimal residual disease, can cause cancer to return in patients who have seemingly been treated successfully.

If doctors had drugs that blocked those survival signals, it’s possible that the original tumor could be completely wiped out the first time around, greatly reducing the chances of relapse. Several drugs exist that interfere with these signals, but they haven’t been tested yet for use in cancer because they were developed originally as anti-inflammatory agents. This kind of drug could be given along with traditional chemotherapy drugs, which kill cells by damaging their DNA or interfering with cell division.

Hemann also studies how a tumor’s genetic profile influences its susceptibility to specific drugs. For drugs such as Gleevec, which targets a specific enzyme involved in one type of leukemia, there is a clearly defined set of patients for whom the drug will work. However, such targeted treatments don’t exist for most cancers.

Many cancer biologists are seeking more of these targeted drugs, but an approach that could have a more immediate impact is identifying genetic markers that can predict the effects of existing drugs on a particular patient’s tumor. Using mice with genetically engineered tumors, Hemann is testing combinations of drugs to figure out which are most effective, which could help doctors treat patients in a more personalized way.

“That’s really our essential challenge — to find biomarkers that are going to underlie the success or failure of therapies,” he says.

Growing up in Shaker Heights, Ohio, Hemann liked science but was also interested in history and dreamed of becoming a museum curator. He started studying history at Wesleyan University but gradually drifted toward biology.

“My perspective on history was always a more scientific perspective. Rather than thinking about history as an allegorical concept or a romantic concept, I always thought about things in a much more pragmatic way,” he says. “I found myself gravitating toward more quantitative fields, more quantitative measures.”

After graduating with a degree in molecular biology, Hemann wasn’t sure what he wanted to do, so he moved to Boston and got a job as a technician in a research lab at Children’s Hospital, where he studied the chromosomal defects that produce mental retardation syndromes.

At Johns Hopkins University, where Hemann earned his PhD in 2001, he continued studying the structure of chromosomes — specifically, repetitive genetic sequences at the tips of chromosomes, known as telomeres, that help prevent the chromosomes from becoming too short as they repeatedly divide.

As a postdoc at Cold Spring Harbor Laboratory, Hemann worked with mouse models in which tumors with genetic mutations were transplanted into the mice, making it easier to study the effects of those mutations on tumor progression. He also started doing RNA interference studies, which make it possible to turn off specific genes and observe the effects on tumor growth — a technique he now commonly uses in his lab at MIT.

While at Cold Spring Harbor, Hemann played the bass guitar in a cover band; he has recently taken up the instrument again, which has given him a new appreciation for its role.

“The bass is sometimes underappreciated for what it does in terms of locking in the way the band sounds, just like the drums,” Hemann says. “It’s almost the way that I see my role in lab now. It’s my job to keep things together and let the rest of them be virtuosos.”

A new target for cancer drugs