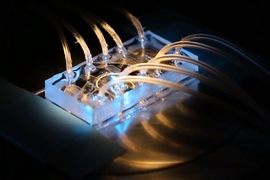 ↓ Download Image
Caption: This image shows an example of a rigid epoxy microfluidic device, similar to those used for the new high-throughput system, on an optical microscope.
Credits: Image: John Friedah 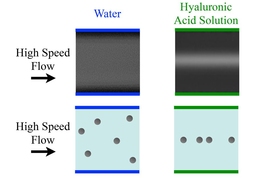 ↓ Download Image
Caption: This image shows conventional long-exposure images (top row), and schematically depicted individual particle positions as revealed by the high-speed pulsed-laser imaging technique (bottom row) in a microfluidic device. At high speeds, the focusing effect on particles breaks down in water due to turbulence, whereas the focusing is preserved and enhanced by the team’s polymer solution.
Credits: Image courtesy of the researchers

Caption:
This image shows an example of a rigid epoxy microfluidic device, similar to those used for the new high-throughput system, on an optical microscope.

Caption:
This image shows conventional long-exposure images (top row), and schematically depicted individual particle positions as revealed by the high-speed pulsed-laser imaging technique (bottom row) in a microfluidic device. At high speeds, the focusing effect on particles breaks down in water due to turbulence, whereas the focusing is preserved and enhanced by the team’s polymer solution.

Researchers compare the processing of biological fluid samples with searching for a needle in a haystack — only in this case, the haystack could be diagnostic samples, and the needle might be tumor cells present in just parts-per-million concentrations. Now, a new way of processing these samples could make such detections possible in real time, according to a team from MIT, Massachusetts General Hospital (MGH), and Harvard Medical School.

The team’s surprising discovery is described in a paper in the journal Nature Communications. The technique could allow cells to be sorted while hurtling through the channels of a microfluidic device at speeds faster than those of race cars, the authors say — at least 100 times faster than any existing system

Normally, fluid flowing through a narrow channel at such high velocity would break up into a chaotic, turbulent flow, making any sorting or identification of cells impossible. But the research team found ways of eliminating this turbulence and even focusing the flow, driving the particles into single file within the channel.

“If you’re trying to find a needle in a haystack, it’s a lot easier if the needle is right in the middle of the haystack,” says co-author Gareth McKinley, the School of Engineering Professor of Teaching Innovation in MIT’s Department of Mechanical Engineering. With this method, that’s essentially what you get: In a process the team calls “inertio-elastic flow focusing,” McKinley says, the flow itself helps concentrate the particles that are of interest. “The bigger particles go to the center first,” he says.

In searching for tumor cells in a large volume of fluid — for example, in a fluid sample drained from a patient’s lungs, or in peritoneal fluid — there may be millions of cells, including those from the tumor, in a volume of up to a few liters; these cells’ shapes, numbers, and biophysical characteristics could make them indicators of cancer.

The researchers showed that by adjusting the flow properties of the fluid sample, they could concentrate all of the larger particles at the center of the flow. They adapted a high-speed, pulsed-laser imaging system to take snapshots of the shapes, sizes, and orientations of the particles as they fly through the device.

Ultimately, the researchers say, the work might lead to a compact, bedside device that could take a blood sample from a patient and provide diagnostic information immediately, rather than requiring processing at a lab, which can take hours or even days.

The new technique might have other uses, the researchers say. The ability to separate tiny nanoscale particles according to size at high speed “could be extremely important for a broad range of clinical applications and biological applications,” says co-author Mehmet Toner of Harvard Medical School and MGH.

Toner explains that the basic concept of flow focusing in microchannels, at low-flow rates, is a very active research field, with at least 50 different groups around the world studying the basic physics of flow focusing and exploring a broad range of applications. This new use of the technique for extremely high-speed processing could unleash a similar surge of interest, he says.

In describing how a fluid moves through a channel, the key flow parameter is called the Reynolds number — a quantity that combines the speed of the flow, the size of the channel, and the viscosity of the liquid. Experimental observation shows that a fluid doesn’t flow smoothly at a Reynolds number greater than about 2,400, Toner says, before breaking up into turbulence.

But the team found that by adding a minuscule amount of hyaluronic acid — a biopolymer — to the fluid, flow rates could be increased to a Reynolds number of 10,000 without introducing turbulence. Indeed, adding the polymer changes the flow properties of the fluid itself, giving rise to fluid viscoelasticity. Measuring how important this effect is in a fluid requires a new parameter, called the Weissenberg number; by understanding the relative magnitude of these two key parameters, the researchers were able to examine flow patterns that had never been studied before.

Doing so required finding a new way of making the microfluidic channels; existing soft materials used for microfluidic devices would not have withstood the high pressures associated with such flow rates. “At that kind of pressure, they would just explode,” Toner says, “so we had to develop a rigid device that was still optically transparent.”

In the new system, liquid can hurtle through a microfluidic channel just 50 micrometers across — about half the width of a human hair — at peak speeds of more than 400 mph, without turbulence. By using flashes of laser light just 10 billionths of a second in duration, the team was able to image the size, shape, and orientation of cells as they moved through the device and were squeezed by the effects of the fluid additive.

Hyaluronic acid is a biological derivative — it acts as a lubricant in the knee — that is harmless to biological samples, Toner says. And it turns out that at great speed, the focusing mechanism grows even more effective. “We didn’t imagine that you could get focusing at such rates,” McKinley says. The new system can achieve flow speeds up to 100 times greater than in existing microfluidic systems.

While the team suggests numerous possible applications in diagnostics, water purification, or even industrial separation of materials, such as for biofuel production, all such possibilities remain speculative at this point, Toner says.

Howard Stone, a professor of mechanical and aerospace engineering at Princeton University who was not involved in this research, says the work “appears original and significant.” He adds, “The ability to control focusing of particles by … adding small amounts of hyaluronic acid seems flexible and very interesting. Moreover, the authors have demonstrated the effect at high Reynolds numbers and so at high speeds and flow rates. This work will be of interest to many people and is likely to find applications in several fields.”