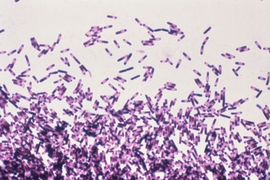 ↓ Download Image
Caption: Clostridium difficile (shown here) is a bacteria in the intestines that has been successfully treated through microbiome manipulation.
Credits: Courtesy of the Centers for Disease Control and Prevention

Caption:
Clostridium difficile (shown here) is a bacteria in the intestines that has been successfully treated through microbiome manipulation.
Credits:
Courtesy of the Centers for Disease Control and Prevention

More than 90 percent of the genes in our bodies do not come from our own cells. Instead, the vast majority of this genetic material is found within the trillions of microorganisms that call our bodies home. Collectively known as the microbiome, these communities of bacteria and other microbes play a significant role in the functioning of the digestive tract, immune system, skin, and other body systems.

In recent years, the microbiome has attracted increasing attention for its role in health and disease. This week, MIT and Massachusetts General Hospital (MGH) announce the launch of the Center for Microbiome Informatics and Therapeutics, a new interdisciplinary center dedicated to advancing the understanding of the microbiome’s role in human biology and harnessing this knowledge to develop treatments for related illnesses.

With an expendable $25 million fund to support research and operations for the first five years, the center will fuel collaborations at the junction of clinical practice, basic research, computational biology, and engineering — critical disciplines for gathering and analyzing vast quantities of data related to the diverse types of bacteria within the human body, and their interactions with each other and the body’s own cells and organs. The ultimate goal is to develop tools and techniques for treating diseases and conditions linked to an altered microbiome.

“Today, low-cost genetic sequencing and high-powered computational methods give us an unprecedented ability to collect information about the human microbiome, but our ability to translate this data into usable knowledge is lagging behind,” says Arup K. Chakraborty, the Robert T. Haslam (1911) Professor of Chemical Engineering, Physics, Chemistry, and Biological Engineering at MIT, and director of the MIT Institute for Medical Engineering and Science (IMES). “This center is built around a bold idea: to accelerate our progress toward a world in which conditions with a genesis in the microbiome can be prevented and treated by solutions derived from a deep scientific understanding of the microbiome.”

The center introduces a new research and academic component to MIT and adds an important pillar to the formal strategic partnership announced by MIT and MGH last month. It is also a key component of IMES, which was established at MIT in 2012 to tackle some of the world’s biggest health challenges through interdisciplinary approaches at the intersection of engineering, science, and clinical medicine. Major funding to support the center’s launch was provided by the Neil and Anna Rasmussen Foundation.

The new center’s co-directors are Eric Alm, an associate professor of biological engineering at MIT, and Ramnik Xavier, chief of gastroenterology and director of the Center for the Study of Inflammatory Bowel Disease at MGH. Under their guidance, the center will seek to develop a regional ecosystem together with other hospitals, universities, and research institutions.

Collaboration between academic investigators and real-world clinicians is vital to the center’s purpose, according to Xavier, who also serves as the Kurt Isselbacher Professor of Medicine at Harvard Medical School.

“Molecular biologists, microbiologists, and cell biologists seek to understand microbe/microbe and microbe/host cell function and communication,” he says. “Immunologists, geneticists, and genomics researchers drive progress. To this wealth of information, clinicians contribute patient-based insights and gain potential targets for therapeutics. We want this center to be a convening hub for strengths that are distributed across disciplines and throughout different institutions in the New England region.”

The center will have three core functions: to advance the field by funding research proposals; to help individual research projects proceed more efficiently through shared services, such as a regional sample facility or support for regulatory compliance; and to draw new talent to microbiome research by promoting the field within the academic community.

The center’s initial, flagship project will focus on inflammatory bowel disease (IBD). Individuals with IBD, which includes conditions such as ulcerative colitis and Crohn’s disease, suffer from chronic inflammation of the digestive tract and experience severe diarrhea, pain, fatigue, and weight loss.

IBD is known to have a strong link to the microbiome, according to Alm: “Microbiome-based medicine is poised to revolutionize patient care for IBD and many other diseases in the gastrointestinal tract,” he says. “Our goal is to develop new treatment options — personalized to an individual’s microbiota and based on natural or engineered microorganisms — that have higher efficacy and fewer side effects than conventional drug treatments.”

Until a few years ago, researchers studied the microbiome by carefully separating individual strains and culturing them in isolation, a time-consuming method that is biased toward species that grow well in the laboratory. Today, however, researchers and doctors can take advantage of faster, low-cost genomic tools that allow them to study the entire bacterial system of individual patients. These tools have opened a window into the balance of human cells and the bacteria, viruses, and fungi that colonize and interact within the body.

Based on this knowledge, potential future treatments for IBD and other conditions might include simple dietary adjustments; targeted therapies designed to remove, add, or even modify specific bacteria; or medical interventions based on reprogramming an individual’s immune system. “We need to develop a toolkit for engineering the human microbiome,” Alm says.

Both Alm and Xavier emphasize that the center’s long-term purpose is to expand the breadth and depth of this emerging field. To that end, the center will also support smaller-scale “innovation projects” that would not otherwise receive funding due to their cross-disciplinary or exploratory nature. While IBD is the focus of the initial flagship project, the center is designed to foster opportunities to explore the impact of the microbiome on systemic autoimmune diseases, such as multiple sclerosis, Type 1 diabetes, arthritis, and other disorders, such as autism, obesity, acne, and allergies.

The co-directors are presenting their research collaboration this week at an MGH-hosted conference on microbes, metabolism, and mucosal circuits. The center will issue requests for proposals in January.

Nature highlights the top science news of the week, including the new interdisciplinary center at MIT aimed at examining the microbiome. “The center will initially focus on inflammatory bowel disease, but organizers hope to eventually broaden the scope to diseases such as multiple sclerosis, arthritis and autism,” Nature reports.

Joshua Krisch writes for The New York Times about Professor Eric Alm’s work developing a device that will analyze public sewage. “This whole field has enormous potential,” says Alm. “It’s hard to imagine that in 20 years, every city won’t be monitoring sewage as an information platform.”